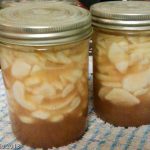 Please leave a comment - I love hearing from you!4 Comments to "Home Preserving: How to Can Apple Pie Filling"