West Dorset has become a place of pilgrimage for food lovers. Not only is it a land of abundance, with wild garlic growing… well, wild… along the verges and dairy cows mooing in delight over the lush green grass, it offers a fabulous selection of top class eating experiences of which we sampled only a few during our 3 day visit. Visitors can enjoy exploring Weymouth, Lyme Regis, Dorchester, Bridport and the beautiful Dorset coastline. 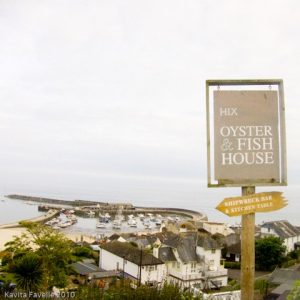 Having made a resolution to eat more fish, Hix Oyster & Fish House was firmly on our list and I made a reservation a few weeks ahead of our trip.

Its location couldn’t be more beautiful, perched on a hillside overlooking a beautiful harbour and a wide expanse of sea. We parked in a nearby car park, followed the wooden arrow and ambled down the steep path towards a cute and quirky wooden hut with sea-themed flotsam and jetsam under the sign outside. 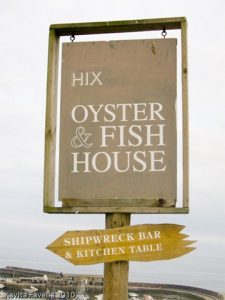 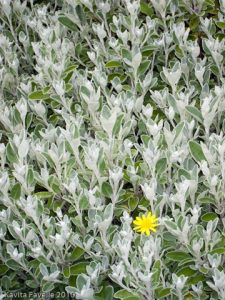 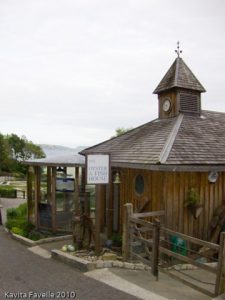 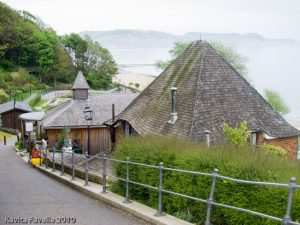 One side and the back of the restaurant are floor to ceiling windows. Before long we were seated at a side window table (ask for one in the bay window for the very best views) enjoying the sunlight flooding in and the beautiful views. 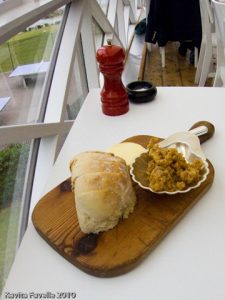 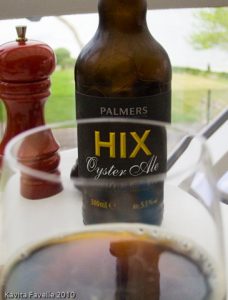 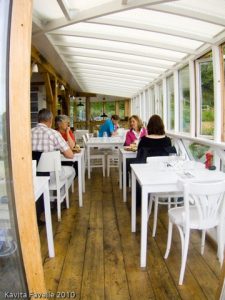 bread and scallop frills; Hix Oyster Ale; a view into the restaurant 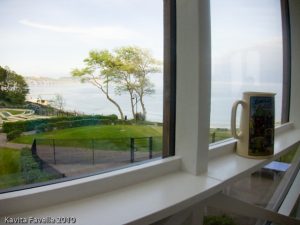 For drinks, a jug of tap water, a Palmer’s Oyster Ale branded (and possibly made) especially for Hix and a fresh lemonade. And with these came a board carrying lovely, soft bread, a generous pat of butter and hot, freshly fried crunchy scallop frills. All absolutely delicious! Pete was a fan of the Oyster Ale too – we visited Palmers last summer, during a week long holiday in the area. 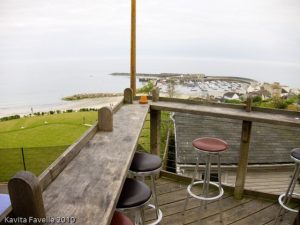 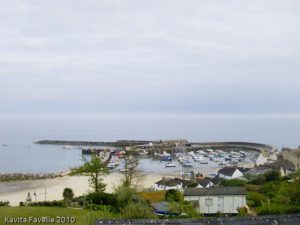 At the back of the restaurant is a delightful little bar terrace, jutting out over the gardens below and offering an even better perspective on the great outdoors. For a while, we could not tell where sea ended and sky began… 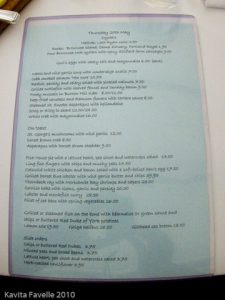 Time to order. Whilst the waiter (possibly also the manager) was reasonably attentive and efficient, he certainly didn’t make the ordering process very smooth. I wanted a little more information about a few of the dishes. Here’s one exchange about a dish described on the menu only as lobster and monkfish curry:

Me: The lobster and monkfish curry – what kind of curry is it?

Me (after waiting a few moments to see if a more useful answer was forthcoming): Yes. I meant what kind of curry, is it Thai, Indian…?

The resoluteness of his one-word answer made me lose the will to try and find out any more about style of curry. In case you’re wondering whether he was in a hurry or if I’d been asking a ridiculous number of questions, the restaurant was virtually empty and this was only my second question, the first of which he’d answered much more helpfully. Perhaps he didn’t know, in which case I’d have much preferred him simply offering to check with the kitchen.

We made our order and it wasn’t long at all before our starters were served. 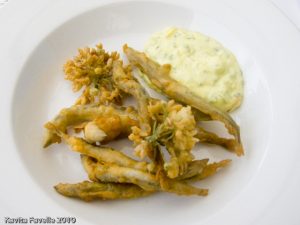 My first question before ordering was about the deep-fried sand eels and Ramson flowers with tartare sauce (£8.00), and that one was answered in a more useful fashion – the waiter advised that they were like whitebait, and they were a bit – a little softer but with that same gentle fish flavour, working well in the light crisp batter.

It’s only now as I’m writing this that I realise (having researched it after getting back from Dorset, for a recent post) that Ramson = wild garlic! At the time, I was wondering what plant this unfamiliar Ramson was, and no, not much garlic flavour came through to trigger a realisation. But the texture of the flower heads enrobed in the crunchy batter was wonderful.

I found the tartare sauce a bit overpowering against the delicate eels and flower heads, and there was far too much of it on the plate for the volume of tempura. 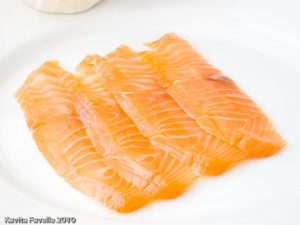 The Cobb smoked salmon ‘Hix cure’ (£11.75) was superb, the cure gave it a really quite special flavour. Whilst a basket of lemon halves wrapped in muslin were offered, no bread or garnish was provided, which surprised us a little.

Unfortunately, the kitchen had obviously decided to make haste before the rush (the place only started filling up a little later). Quite literally within 2-3 minutes of our starter dishes being cleared away (which was itself very quickly after we’d finished eating) our mains were served! This was way too fast, and we were pretty disconcerted – at this rate we’d be in and out of the place in under half an hour – not at all the relaxed, enjoyable evening we’d envisaged.

Still, we got stuck in. 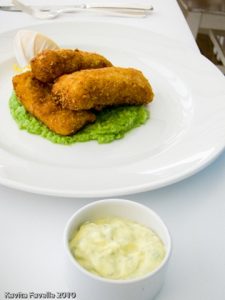 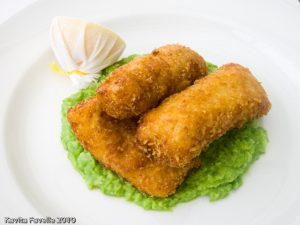 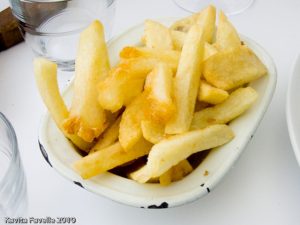 Although Pete toyed with ordering the chicken, bacon and egg salad the restaurant’s reputation for fish saw him opt finally for the ling fish fingers with chips and mushy peas (£14.50). These were fabulous! Beautifully soft fish fillet wrapped in a thick, crunchy breadcrumb coat, they were poshtalgia at it’s best! The mushy peas had a freshness that matched their vivid colour. The chips were good too. 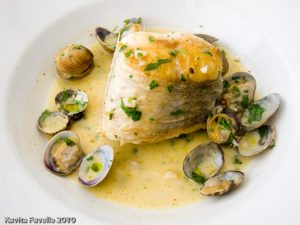 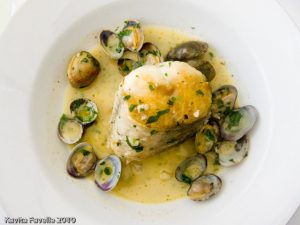 My Cornish hake with clams, garlic and parsley (£20.00) was a thing of beauty. Again, the fish was perfectly cooked and bursting with juice. The sweet little clams, garlic and parsley balanced it marvellously whilst letting the gentle taste of the fish shine too. I don’t often order fish as a main course – too much of a red meat lover – but this is the kind of dish that persuades me I must do so more.

Wary of how much we’d been rushed into our mains, we decided not to even order desserts until after a short break on the outdoor terrace where we stood, drinks in hand, watching the light change as the sun sank, out of view off to the right. 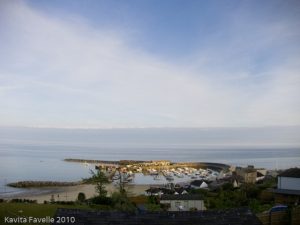 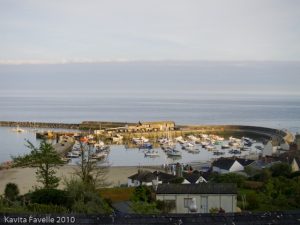 sunset views from the terrace

Unfortunately, our ten minute break outside couldn’t have come at a worse time. Although we’d mentioned to the waiter before popping out that we’d order on returning to the table in a few minutes – when we came back inside the three front of house staff (barman, waitress and waiter/ manager) were overwhelmed managing drinks orders for the two larger parties that had arrived, and serving dishes to the other tables. We waited patiently, but just when I thought it was surely our turn – the various long-winded drinks orders finally served, bread and nibbles served, other tables visited and looked after – instead the staff turned to taking food orders from the two large groups instead.

If I sound a little petulant, I am. I genuinely don’t mind waiting longer during busy periods, when I can see well-trained and aware staff keeping mental track of who is waiting for what, and am confident that we’ll be slotted in to their quickstep. I think what made me cross was that we’d been forgotten.

Some quite considerable time later, when we finally piped up and called the waitress over, we were able to put in our order for desserts – to our waitress’ credit, once we were able to attract her to our table, she was happy to explain a couple of the desserts to us. It took a long, long, long time again for them to arrive and, although we asked for coffee to come at the same time, it was forgotten until we mentioned it after we’d finished our desserts. 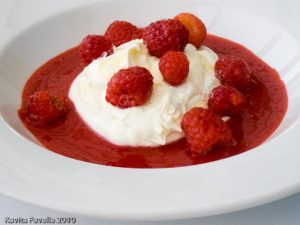 Pete’s lemon curd cream with raspberries (£7.00) was a lesson in simplicity. The rich sweet lemon curd folded into whipped cream was balanced by the acerbic raspberries and coulis; chef had resisted the temptation of making the coulis too sweet. Could not have been better. 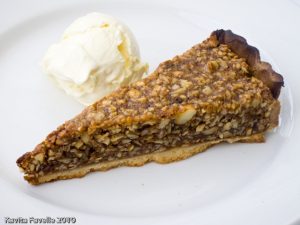 My shipwrecked tart with clotted cream (£7.50) was, despite that burned crust, a hit. I really loved the flavour combination of sugar-coated walnuts, hazelnuts and chestnuts but found the balance of nuts to sticky binding syrup wasn’t right and what should have been, I think, a firm but moist mass kept disintegrating into frustrating crumbs. Still – it tasted mighty fine.

Overall, we very much enjoyed our meal. Although we had some issues with the service (I’m curious if they were under-staffed or simply blind-sided by the two tables of six arriving in such close succession) we did find them friendly and willing, if rather inconsistent. The setting itself is magical (and rather romantic, I think). The food is, as I’d hoped, pretty good.

And you’ll see, in a later post, although I didn’t make the mental connection between Ramson and wild garlic, it must have clicked subconsciously – just before heading back to London, we foraged a generous armful of wild garlic flowers which we deep-fried in tempura batter for a light dinner that evening! I’ll call that the Hix influence!