Why are we eating parsnips in the summer?

Well… we grow our own vegetables and, last year, we planted parsnips for the first time. Early January was rainy and miserable and we left much of our winter crop in the ground for longer than we should have. So we urgently harvested a bumper crop of giant parsnips in January, just before leaving for a month in the Falklands. We froze several boxes, prepped and chopped into batons, and promptly forgot about them until a recent push to work through our freezer stock.

A couple of months ago, I was sent a review copy of Hix Oyster & Chop House. Things were a bit busy at the time and I browsed through the book, bookmarked a handful of recipes that appealed and put it to one side. And there it stayed, on my mental list of things to get around to, until we were suddenly looking for parsnip recipes at the height of summer!

We quickly settled on a recipe for Baked Parsnips with Lancashire Cheese. As fans of gratin dauphinois – thinly sliced and layered potatoes and cream baked in the oven, sometimes with the addition of milk, cream and garlic – it’s not hard to understand the appeal of parsnips baked with cream and cheese! 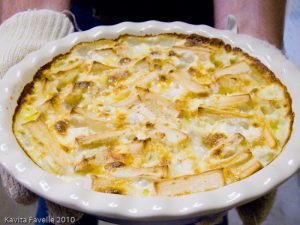 You can see the original ingredients, quantities and instructions here: 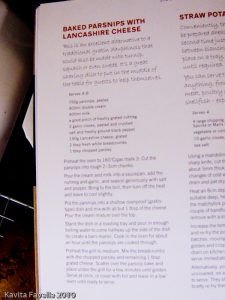 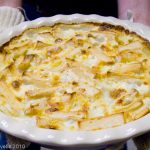 The tang of the cheese against the sweetness of the parsnips is magical and the cream and milk make it wonderfully rich. This is definitely one of those dishes that’s more than the sum of its parts, though its parts are all very good already.

For this one recipe alone, I’m hugely grateful to Mark Hix and his book and have gone back to the book to search out other gems I may have looked over in my initial bookmarking.

The book is Hix’ first restaurant book, though his previous titles about fish and British food have been well received. Named after his first restaurant, Hix Oyster & Chop House, in London’s Smithfield market, the book features recipes that appear on the menu throughout the year.

As the name of the book suggests, the two main foci are oysters and meat, although, as my chosen recipe indicates, there are also recipes for starters, sides, desserts and even cocktails.

Oyster fans will likely appreciate the chapter introducing 8 types of Oysters (all from the UK and Ireland, both native and cultivated types) along with and instructions on how to shuck them.

The Meat chapter covers beef, veal, lamb and venison, providing information (and great photographs) on different cuts and how best to cook them. Of course, it’s not nearly as comprehensive as the information in Leith’s Meat Bible, that I reviewed recently, but then I wouldn’t expect it to be.

Oddly enough, although I’d happily order many of the mains if I were visiting the restaurant, there are not that many that appeal to cook at home. But there are some recipes I want to try in the other chapters, including cobb egg (like scotch eggs but with a fish mixture around the eggs, rather than pork), Heaven and Earth (based on the German himmel und erder), several of the salad dressings, coley with sea spinach and brown shrimps, chop house butter, shipwreck tart (which I tasted when we visited Hix Oyster and Fish House), white port and strawberry trifle, and hix oyster ale cake.

It’s an attractive book, I can’t help but like the simple brown paper cover and clean design. If the other recipes we try are as successful as the parnsip bake, it’ll earn a place on our permanent book shelf!

With thanks to Quadrille for the review copy of Hix Oyster & Chop House.

Please leave a comment - I love hearing from you!8 Comments to "Hix’ Baked Parsnips with Lancashire Cheese"