A few days ago I shared my review of Regula Ysewjin’s Pride and Pudding: The History of British Puddings published by Murdoch Books. Click through to read more about this absolutely beautiful and fascinating book that shares a slice of Britain’s culinary history through the stories of its puddings. 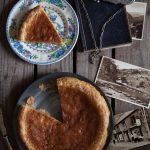