A few weeks ago the founders of HelloFresh got in touch asking if Kavey Eats would like to review a free shipment of one of their recipe and food bags.

Aiming at an audience of “busy food-lovers” they claim to “take care of your meal planning and even do the shopping for you“, allowing you to “discover amazing food and provide a healthy diet to the people you love most“. Their team “consists of culinary experts, top chefs, dieticians and nutritionists” who create and test their recipes, which “are delicious and easy to prepare within 30 minutes“. Each meal should contain “around seven ingredients apart from basic things like salt” and recipes include dishes such as “chicken tikka masala, goulash, Mexican tacos, grilled fish with vegetables, chicken and mushroom pasta, quiche, Indian curry, and grilled chicken with grilled vegetables”.

Our HelloFresh bag arrived one Monday evening in January, at around 8 pm. Currently, only Monday evening deliveries are available. Unless you eat later than we do, you won’t be able to plan on using one of the meals that night, as the delivery slot can’t be more specific than sometime between 5 and 9 pm.

All the ingredients were in a single large bag. On examining the contents, we immediately noticed that the chicken – the main ingredient for one of the three meals – was missing. An email the next morning resulted in delivery the following night.

We separated fridge and non-fridge items and commented that it would have been handy had the ingredients already been separated for us, both by storage medium and by recipe.

The three recipes we were sent in our bag were Mamma’s Secret Beef Bolognese with Spaghetti, My Thai Green Curry with Chicken, Sweet Potato and Basmati Rice and Millionaire’s Shepherd’s Pie.

We were a bit surprised that two out of three were mince based, but they were all things we already cook and eat, so not a big issue.

All three recipes were designed to make servings for two people.

The recipes were provided on individual cards, A5 on a black background. One one side is a photo of the finished dish, photos of the ingredients and an ingredients list. On the other side are step by step instructions with accompanying photographs.

The biggest problem with the cards, for us, was the tiny green text on the black card – it’s pretty difficult to read.

I found the last instruction on the Thai curry card, to “tear up all your takeaway menus and place in the dustbin“, facile and a bit smug. We’ve been making Thai curries at home for many years, but that doesn’t negate the pleasure of having ready-cooked food delivered now and again! 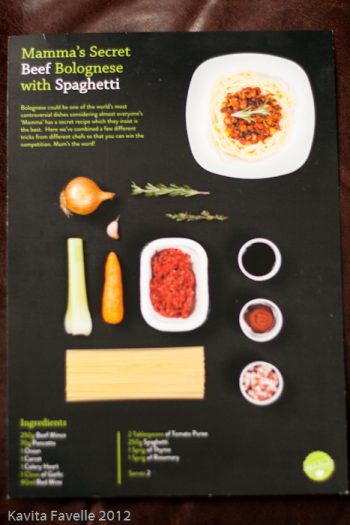 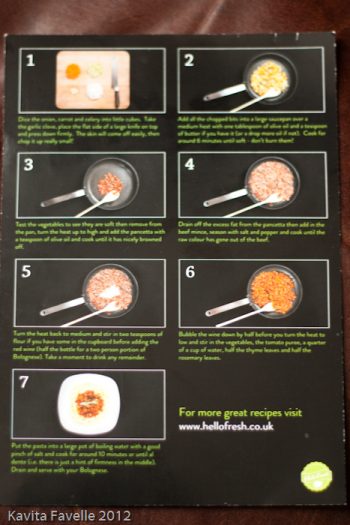 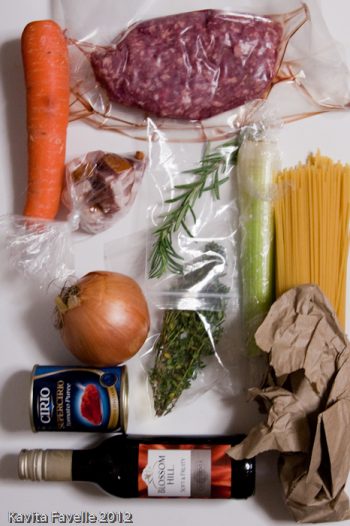 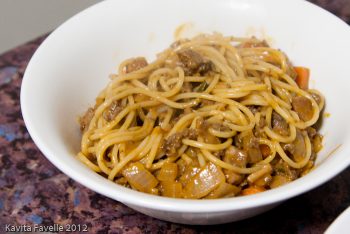 Mamma’s Secret Beef Bolognese with Spaghetti tasted pleasant enough, though it was very much a British spagbol rather than an authentic Italian ragu, so perhaps a nod to “mum” would have been better than “mamma“.

Peeling and chopping things took a bit of time, as we don’t have particularly fast knife skills; it would have been nicer to be provided with ready-weighed, ready-prepared ingredients.

We realised when we tasted the finished dish that we’d clearly diced the carrot too large, and the chunks didn’t incorporate nicely into the sauce. We didn’t like the texture or taste they gave.

We assume there was a mistake in resizing the recipe from the four-person version – 250 grams of pasta for two people is surely far too much; we cooked about 125 grams between the two of us and that was plenty.

There was nothing really wrong with this dish but it was rather ordinary. 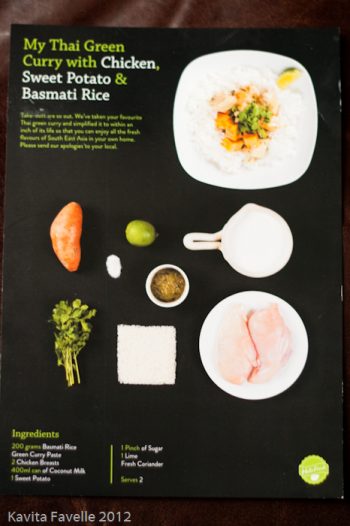 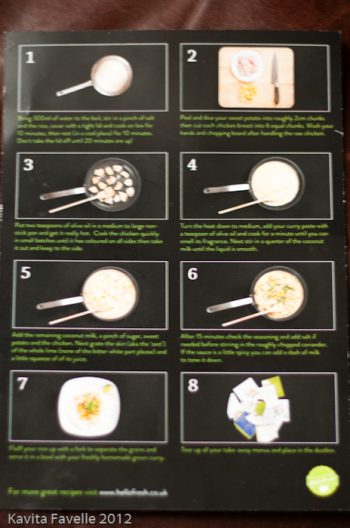 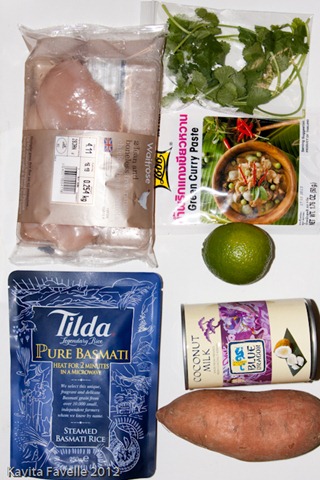 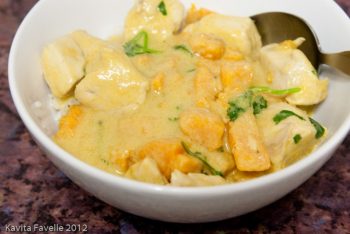 Called My Thai Green Curry with Chicken, Sweet Potato and Basmati Rice, this recipe contained a number of errors.

We use a very similar curry paste regularly, and had a feeling the sachet of paste provided might be too much, but went ahead with the recipe as written, to give it a fair test. I wonder if this was another mistake in resizing from a four-person version, as the curry was way too strong. Not just for me – I’m a bit of a wuss – but for Pete too and he can take far more heat than I.

What we did like was the inclusion of sweet potato, something we’ve not encountered in a Thai curry before, but really enjoyed, especially as it countered (a tiny bit of) that excessive heat.

The recipe card gave instructions on how to cook 200 grams of (dried) Basmati rice from scratch, but what was actually included was a packet of ready-cooked Tilda basmati, 250 grams in cooked weight. Here, we let common sense divert us from the recipe card and followed the reheating instructions on the packet. But the packet was too small a portion for two adults, the exact opposite of the pasta in the previous recipe. I estimate that 100 grams uncooked rice makes about 250 grams of cooked rice, so you’d need two of the ready-cooked packets to substitute for 200 grams dried rice.

We thought it a bit weird to have us peeling and chopping ingredients, yet not cooking our own rice.

Ignoring the excessive heat and lack of sufficient rice, we liked the dish well enough, but felt it was very basic. We often keep tubs of Mae Ploy Thai curry paste in the fridge and cans of coconut in the larder, allowing us to buy a portion of meat and vegetables and make something similar, with very little thought or effort. 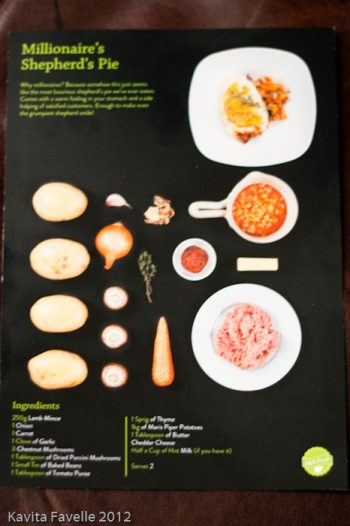 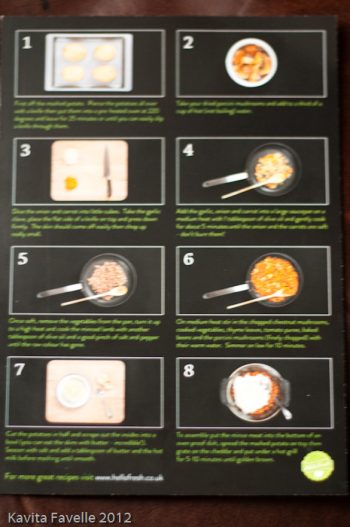 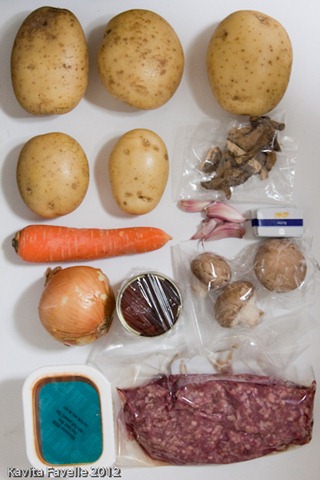 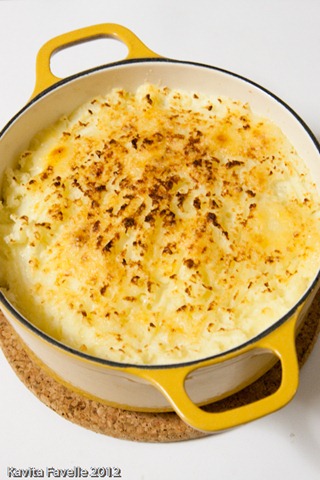 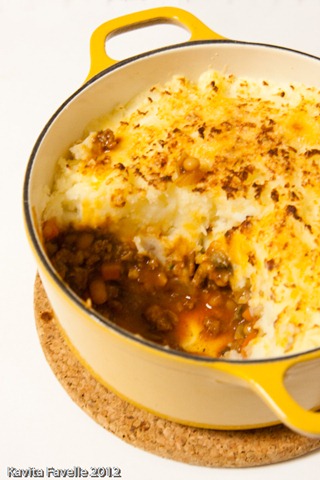 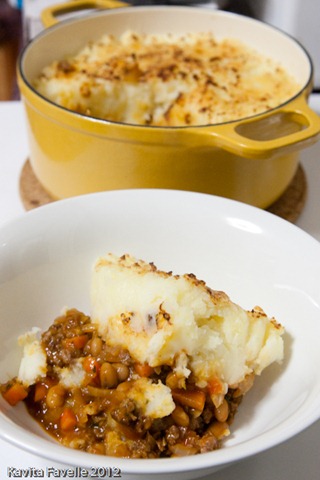 Our guess is that the Millionaire’s Shepherd’s Pie also had an error in resizing from a four-person version – the volume of potato (a whopping 1 kilos of raw potatoes provided in the ingredients) was simply far too much for the amount of mince. Again, we went ahead with the recipe as written, to give it a fair test.

It’s an odd recipe, using both higher end ingredients such as dried porcini mushrooms and budget ones such as a tin of baked beans. And more diced carrot.

Other than the ratio of potato to meat filling, the recipe worked well enough but we certainly didn’t feel it merited it’s title of “Millionaire’s“, which implies something more luxurious than normal, not less!

Three evening meals for a couple cost £39, rising to £59 for a family of four. For five evening meals, you’re looking at £49 and £89, respectively.

At £13 for each of our meals for two, we found this quite expensive.

I spent 15 minutes adding the ingredients for all three recipes to a Tesco direct shop and they came to £23, with some items (such as the green curry paste and one of the packs of mince) providing enough for additional portions / meals.

For the extra £16 I’d expect far more added value, particularly in the form of ready-prepped ingredients.

I’d also expect meals that are a little more special than our spagbol, Thai curry and shepherd’s pie.

The time-saving premise is based on recent survey findings that a the weekly grocery shop for a family of 4 takes about 90 minutes, of which just over an hour is in the supermarket, the rest being travel time.

But as the HelloFresh bags contain only evening meals (with no drinks or desserts included) you certainly won’t be saving much of those 90 minutes as you’ll still need to buy breakfast, lunch, household products, toiletries and all the other items in that average weekly trolley. At most, you might shave 15 minutes a week if you’re lucky.

If time is what you’re short of, I’d suggest switching to regular supermarket online shopping, which has the benefits of letting you order everything you need for the week, makes it easy to re-order regular purchases, allows you to pick your own delivery day and slot and will save the journey time and carrying heavy bags just as well as HelloFresh.

The quality of the ingredients, particularly the meat, seemed good.

Olive oil is called for in two of the recipes, but not included in the ingredients. Likewise, the shepherd’s pie suggests an (optional) half cup of milk to add to the mashed potato topping; this is also not included. Whilst olive oil, milk and salt and pepper are certainly standard store cupboard ingredients, it’s worth pointing out that the bags do not contain everything used in the recipes.

Currently, HelloFresh doesn’t allow customers any visibility of the recipes they’ll receive, let alone any control over dishes or ingredients they may dislike.

Both Pete and I felt that, when paying a premium for this kind of service, we would expect more control over what we received, more interesting recipes, using higher end ingredients and more of the prep-work done for us.

The recipes haven’t been adequately tested in terms of volumes or timings.

Some ingredients (such as cheese and curry paste) are listed without amounts, which is fine when you’ve been sent the ingredients by HelloFresh but makes it less easy to re-use the cards again, which would be another way of adding value.

The meals we cooked from our HelloFresh bag were, in the main part, perfectly decent weekday dinners.

However, for the £39 price tag, we didn’t feel they were great value. The cost premium, coupled with lack of any real time saved, made this an expensive way to find recipes and buy ingredients for three very simple dishes.

In all honesty, we were at a bit of a loss about the intended target audience…

Of the friends we know – both with children and without – finances would preclude spending this much for everyday dinners. If it’s about saving time rather than money, there would be an expectation of ingredients ready peeled and chopped.  Those with more disposable income and/ or more of an interest in food and cooking would likely look for something more challenging to make or more exciting to eat.

What do you think?

If not, what changes would you suggest to make it more appealing to you?

Please leave a comment - I love hearing from you!15 Comments to "HelloFresh Reviewed"