I’m not the first blogger to report on the latest Hawksmoor opening and I won’t be the last. The launch of the third restaurant by Huw Gott and Will Beckett has been eagerly greeted by meat-loving Londoners, of whom I’m definitely one.

Located in the heart of the City of London, a short walk from both Moorgate and Bank stations, the latest outpost of the popular steakhouse is bound to prove a hit with discerning city workers as well as those willing to travel from farther afield.

And, to shake things up a bit, the new branch offers a breakfast menu from 7 am on weekday mornings. (Seven Dials does lunch and dinner only, Spitalfields offers popular weekend brunches but no breakfast during the week).

Pete and I made a (review) visit on Friday for a breakfast that set us up not only for the morning but kept us satiated until well into the afternoon. Please note that our visit was during the soft opening week, a period during which the restaurant was testing food and service, and making final tweaks. 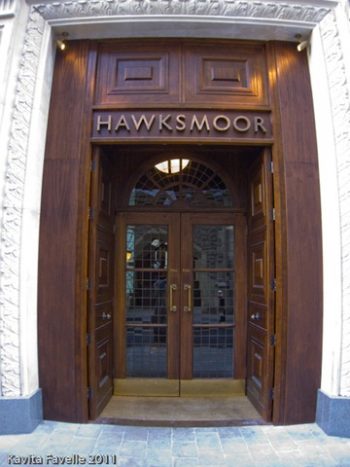 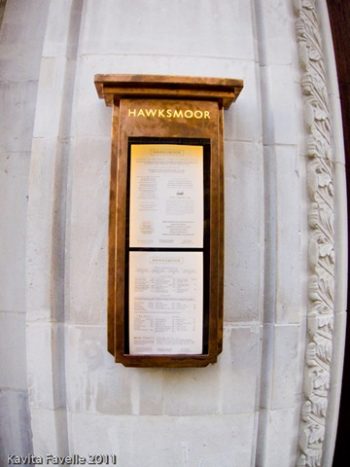 We entered through the imposing front doors, down the wide staircase and into the spacious bar. 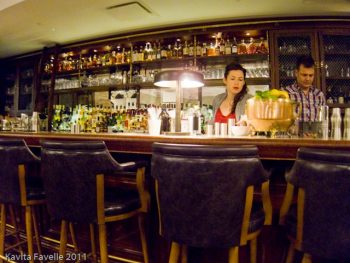 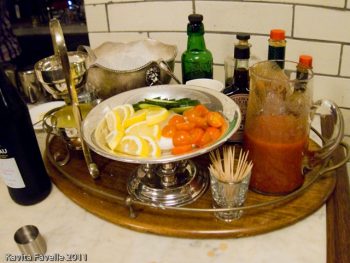 There are bar stools and regular tables and chairs in the bar area and a splendid Bloody Mary buffet tray, for those who feel the only way to get the Bloody Mary of their dreams is to mix it themselves! 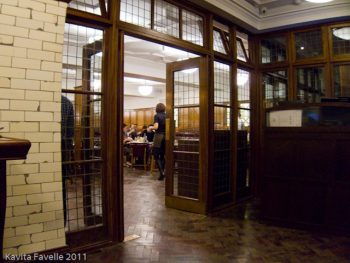 From the bar, an imposing glass wall with wide double doors leads through to the main dining area. 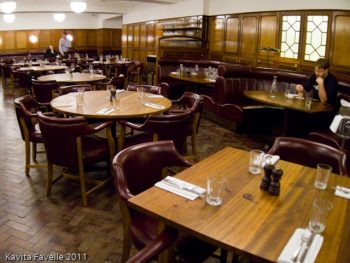 The large, brightly lit space looks like the former canteen for very senior managers of a very rich bank. The wooden panels and flooring have the patina of age and the new furniture is traditional in design, such that it fits right in. I couldn’t believe it when owner Huw Gott told me that the inside had been an empty shell but understood once he explained that much of the fittings had been reclaimed after being stripped from elsewhere. 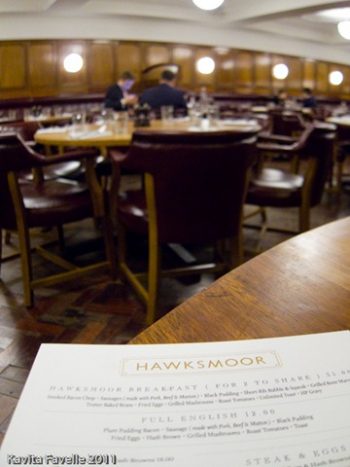 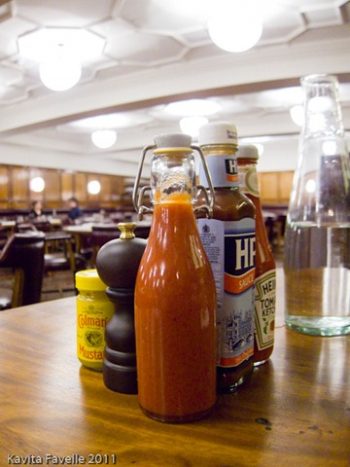 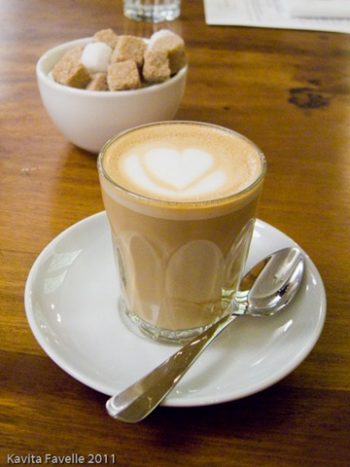 We ordered coffee (£3) and water and settled down to read the menu.

For those who want something lighter, or less meaty, the menu also offers options such as Granola with Yoghurt (£5), Porridge with Golden Syrup or Plums (£5), Unlimited Toast with Homemade Jams and Marmalade (£4) and a selection of Pastries and Doughnuts (£2 each).

The drinks selection is also impressive with alcoholic cocktails, freshly squeezed or whizzed juices and smoothies and a good range of teas, coffees and hot chocolate. 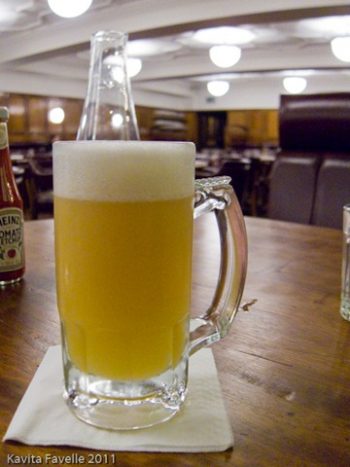 Although it was breakfast, Pete couldn’t resist ordering Shaky Pete’s Ginger Brew (£8.50) which consists of gin, homemade ginger syrup and lemon juice, topped with London Pride. Described on the menu as “a turbo-shandy for the discerning drinker” it was fiery strong but fabulous, a perfectly balanced blend of beer and spicy ginger. 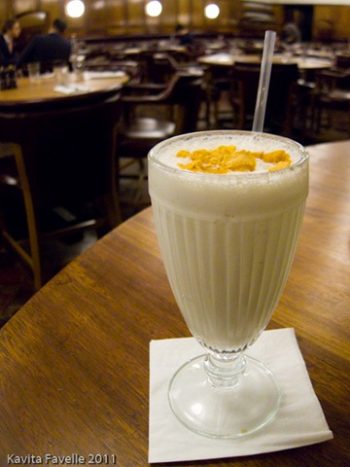 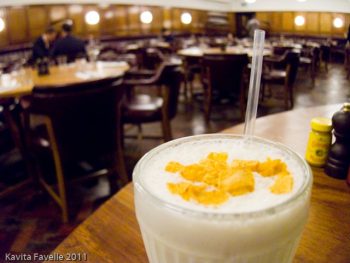 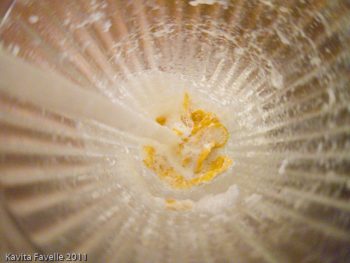 Likewise, I eschewed the Cornflake Milkshake (£4) and chose instead the Cornflake Hardshake (£8), with a slug of Bourbon added for extra kick. It was rather a fabulous start to the day and disappeared far too quickly! 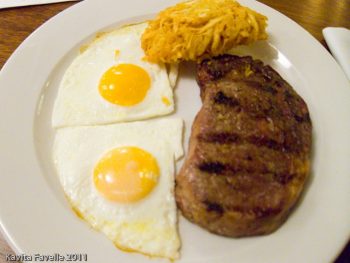 I spent a great many childhood holidays in the USA, both visiting family in Florida and touring many of the other states and as a result, have a soft spot for breakfasting on steak and eggs. So I couldn’t resist ordering the 250g Rib-eye, Fried Eggs & Hash Browns (£21).

It may not look visually appealing on the plate but it certainly went down well. The steak was cooked medium-rare, as ordered, and bursting with flavour. And that hash brown, which looks from the outside to be all crunch and no give, it’s deceptive is what it is, and once I broke into it with my fork, I was almost instantly addicted to the combination of crispy and soft. I wish I’d had another! The only other thing I’d change next time is to ask for my eggs to be cooked hotter so the white has a little brown crispiness underneath, but that’s a very minor quibble and one that’s entirely down to personal taste. 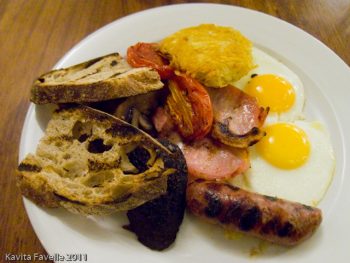 Pete chose the Full English (£12) and valiantly worked his way through plum pudding bacon, a pork, beef and mutton sausage, black pudding, fried eggs, hash brown, grilled mushroom, roast tomatoes and sourdough toast. The sausage and bacon in particular, were excellent, though everything on the plate received positive comment and, that hash brown really won hearts.

We took our time, lingered over breakfast and books and relaxed. 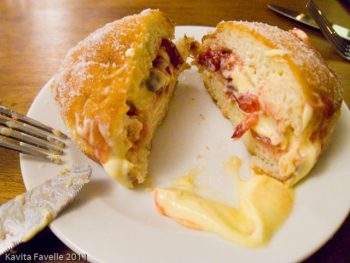 And after those hearty dishes, we found ourselves with just the teeniest tiniest of space left and decided to share one of the custard and plum doughnuts (£2) I’d heard talk of in recent days. It was absolutely superb, and the use of chunky fruit rather than liquid jam made a pleasing change.

Service, as expected from my visits to the other two Hawksmoor properties, was warm and friendly. Some of the waits were long given the almost empty restaurant. However, as I mentioned above, we visited during the soft opening and I’m confident these issues will disappear as the kitchen and staff hit their stride now that the restaurant is fully open.

In the main part, I found prices very reasonable for the quality and quantity served (though £3 for a tiny latte seemed steep compared to the rest). Certainly, you could push the boat out with that enormous breakfast for two or steak and eggs, not to mention a very tempting list of cocktails. But equally, you could spend a mere tenner on a hot drink and your choice of cereal or perhaps a sausage or bacon sandwich or maybe a tempting pastry or how about soft boiled eggs & anchovy soldiers?

I can’t wait to go back and try their lunch and dinner menus!

Kavey Eats dined as a guest of Hawksmoor Guildhall restaurant.

Please leave a comment - I love hearing from you!8 Comments to "A Hearty Start at Hawksmoor Guildhall"