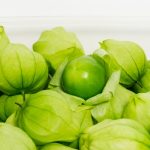 Please leave a comment - I love hearing from you!33 Comments to "A Taste For… Tomatillo | Green Tomatillo Salsa"