But before all these ideas came doughnuts! So when we were sent a Judge Cookware Multi Basket deep fat fryer to review (coming soon), the very first thing we made just had to be doughnuts. Well, you would, wouldn’t you? With a pile of cookery books awaiting review, we flicked through Pure Vanilla by Shauna Sever and chose her Glazed Vanilla Bean Doughnuts recipe to try.

Published by Quirk Books, a young American publishing company based in Philadelphia, Pure Vanilla has been written primarily for the US market, which means you’ll need to make a little effort to translate aspects of the recipes. Fahrenheit cooking temperatures and cup measurements are easy as conversion charts are handily provided inside the back cover. You’ll also need to parse ingredients such as all-purpose flour, confectioners’ sugar, heavy cream and sticks of butter… but in the era of Google, that’s not too onerous.

Often, single ingredient cookery books can be a little too gimmicky, adding the chosen ingredient to recipes in which it doesn’t really belong or contribute just to shoe-horn them into the book. But I really like the kind of recipes Sever has included in her collection – I’m drawn to Light, Crisp Vanilla Waffles; Vanilla Cloud Cake; Tres Leches Cake; Vanilla Snaps; Vanilla Biscotti; Vanilla Bean Marshmallows and Vanilla Mojito, amongst others.

There are some weaknesses with the book though:  the index is truly appalling – it lists over a third of the recipes under “vanilla”, which is surely a given in every single recipe in the book (and should have been excluded as an ingredient in the index)

Not all recipes have accompanying photographs, which is a shame since those that do instantly appeal more strongly. 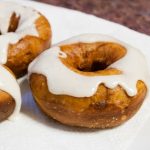 With thanks to Quirk Books for the review copy of Pure Vanilla by Shauna Sever and to Judge Cookware for the multi basket deep fat fryer.