My twitter friends are great. Particularly when I’m looking for restaurant recommendations, such as a pre-show dining option before giggling at Bill Bailey live at the Leicester Square Theatre during the early May bank holiday weekend.

Food and film guru, DineHard (previously known as Lambshank Redemption) was most helpful of all, putting forward several spot-on suggestions, one of which was The Forge, on the corner of Garrick and Floral Streets.

The Forge fit the bill perfectly – a short walk from the theatre, tempting food, a competitively priced set menu (and reasonable prices on the a la carte too), open on a Sunday and tables available. And, of course, recommended by someone whose food opinions I trust.

I didn’t know, until I looked up The Forge’s website, that it’s the third London restaurant in the stable of Robert Seigler, who also owns Le Café du Jardin (which I’ve been to) and Le Deuxieme (which I haven’t). Head chef Andrew Barber started his career working for Nico Ladenis before moving onwards and upwards. A good pedigree, then. 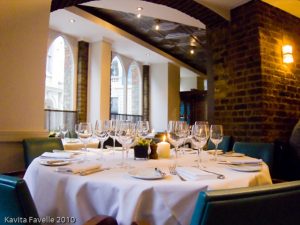 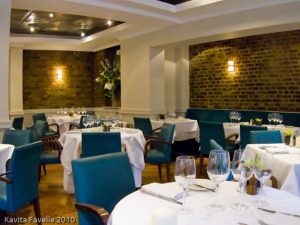 On arriving just before 6 pm we were the first to be seated but it wasn’t long before other diners appeared, and by the time we left, the dining room was quite busy. 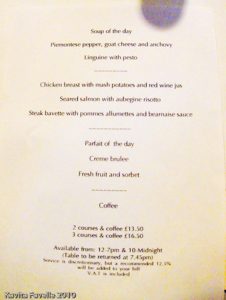 On being given a la carte menus only, I asked about set menus and was then given their lunch time, pre- and post-theatre menu – a very reasonable £13.50 for two courses or £16.50 for three. A nice touch is that coffee is also included. 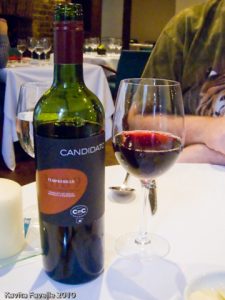 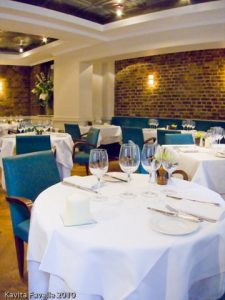 The wine list is extensive and global. Even though I’m not the wine drinker, I made a random pick for Pete, choosing from one of the many <£20 bottles available. He seemed to enjoy the Candidato Tempranillo, Vino de la Tierra (Castilla) 2009 (£17.50) which he described as a fruity, light red.

I confused the waiter by ordering a dessert wine as an aperitif, especially as I ended up nursing my delicious glass of Quady Elysium Black Muscat (USA) 2007 (£6.25) through much of the meal!

I’m afraid, for the purposes of writing a review, we didn’t choose well – both of us opted for the same starter and main! 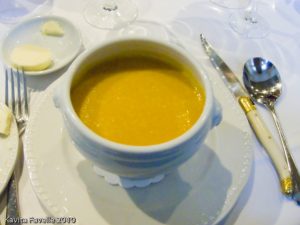 The butternut squash, coconut and chilli soup was thick, creamy and absolutely delicious. The combination of sweet squash and coconut worked very well. The chilli was very subtle indeed (which I was happy about, not being a huge fan of very hot food). I ate mine with copious amounts of fresh white bread and butter. A very good start. 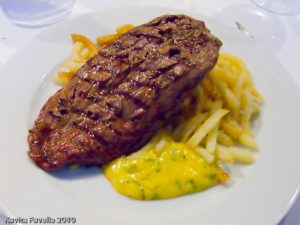 Both of us enjoyed our steak bavette with pommes allumettes and bearnaise sauce. The steak was flavoursome, and more tender than bavette can sometimes be. The matchstick fries were lovely and crispy. The bearnaise was a little mild for my tastes, but flecked with fresh tarragon.

Dessert was a more difficult choice. The parfait of the day was an unappealing combination, so much so that I can no longer bring to mind what it was! Neither of us were in the mood for fresh fruit and sorbet. And I didn’t much fancy the creme brulee either. 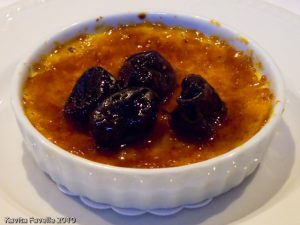 Pete did choose the creme brulee and rather liked the alcohol soaked dried fruit on top, though he wasn’t so impressed with the texture of the custard and, given the shallowness of the dish, there was too thick a layer of burnt sugar for the little custard beneath. 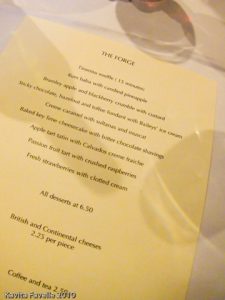 I ordered from the main dessert menu and chose the apple tarte tatin with calvados creme fraiche (£6.50). I didn’t care for it much, I’m afraid. The whole affair was soggy and had, in my opinion, been made too far in advance. I didn’t like the combination of calvados with creme fraiche and the sharp tang of the cream didn’t help cut through the slightly sickly sweetness of the apples as I’d expected it to.

So desserts were the let down of a meal that had otherwise satisfied. And satisfied well enough that we’ll still likely go back.

After coffee (and tea for me), it didn’t take long to settle our bill and saunter across to Leicester Square Theatre for an evening of giggles and singing with Bill Bailey.

The only other slight niggle was that, as other customers came in after us, I noticed they were ordering from a set menu that clearly offered more choice and also included half a bottle of wine per person. I didn’t think much of it until the couple at the table next to us had some particularly delicious desserts arrive, though I’d also been impressed by the look of a generous fritto misto main. Whilst one took a trip to the facilities, I asked her dining partner about the menu they had chosen from to learn that the restaurant is currently offering a special 2010 menu on Sunday and Monday evenings, priced at £20.10 for three courses and wine. This is the menu that all three of the tables that arrived after us were given. It offered a greater choice of dishes for all three courses and included the same steak frites main we’d both enjoyed. As we left, I asked whether this 2010 menu was only available to customers who had booked it advance, the answer was no, so I was a little disappointed we had not been offered it ourselves, when asking about set menus on arrival. Especially as the desserts appealed a lot more! I asked how much longer it would be available, and the response was a non-committal shrug, so it may be worth asking specifically about it if you visit on a Sunday or Monday evening.

Please leave a comment - I love hearing from you!5 Comments to "Forging On: Pre-Theatre Dinner in the West End"