Cecil, a 3.5 kilo beast of a Red King crab certainly lived up to the name of Fancy Crab, a new restaurant in London’s West End, a stone’s throw north of Bond Street station. He was named by the first customer of the day, as is the newly-opened restaurant’s tradition. Red King crabs can grow up to three metres from leg tip to tip, and weigh up to ten kilos. Cecil, huge as he seemed to us, was a mere youngster, caught in the cold waters of the Barents Sea. 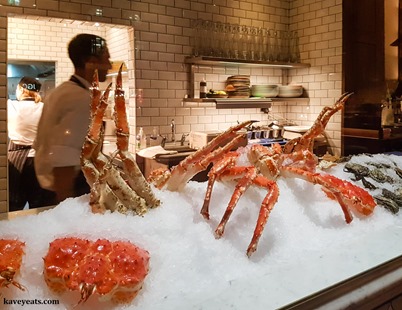 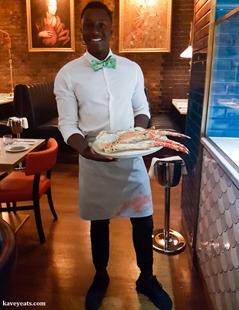 Specialising in fresh crab and oysters, the menu offers both served in a few different ways, plus a handful of other seafood items and sides to cover the bases. 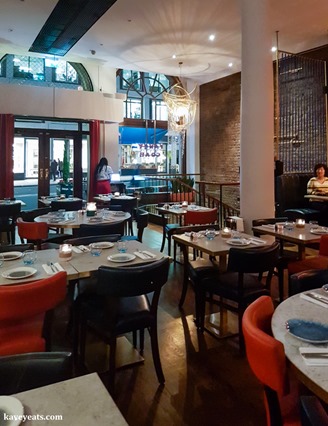 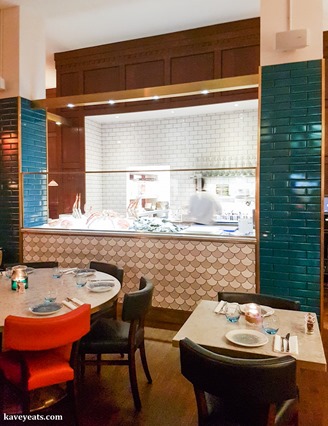 The space is huge, modern and casual in styling with exposed brickwork, booths along the two sides and a wide block of regular tables between. I’d specify a booth in your reservation if possible. 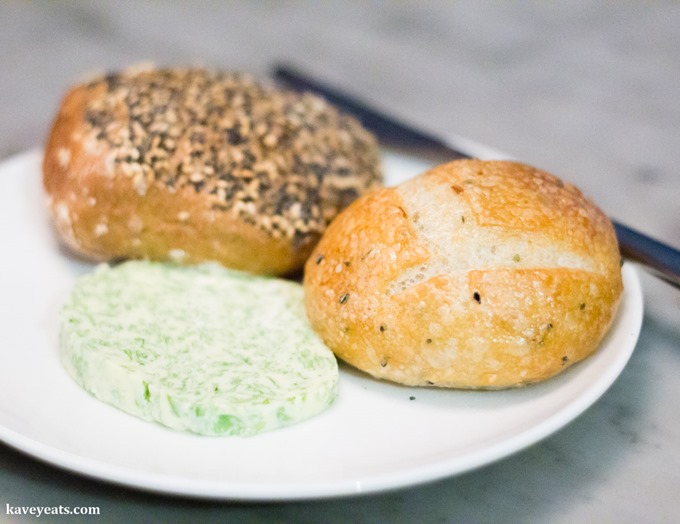 Decent bread to start, though I’d have preferred each diner to be offered a choice rather than two different rolls being served to share. 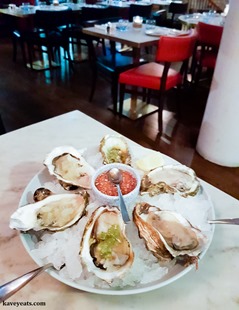 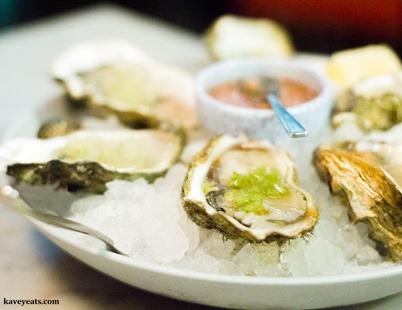 We started with a selection of oysters, a few Pacifics (£2.50 each) served without garnish, and one each with a Mojito granita and a Japanese dressing (£3.50 each). The oysters were superbly fresh and sweet, and I usually like them plain with little more than a tiny dash of vinegared shallots, but I confess that the mojito combination was an absolute stunner, the mint and lime perfectly enhancing the sweet salty oyster. The Japanese dressing was also delicious, but a little too punchy to let the oyster shine through. 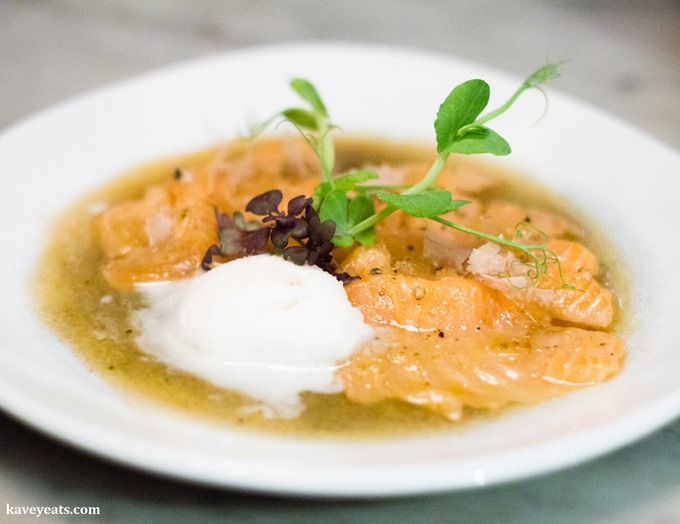 Also from the starters section, sashimi of salmon with bonito sorbet. A beautiful quality cut of salmon, it paired fantastically with the sorbet, of which I’d have loved just a little more. 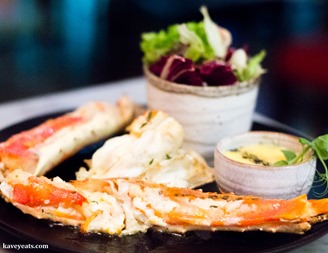 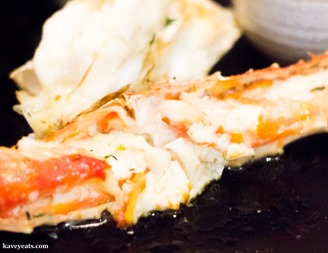 For our mains, we shared two crab dishes.

First, a grilled whole leg and shoulder of red king crab served with chips, Hollandaise sauce and a leaf salad (£36). The crab meat was served in the shell but helpfully detached from it, making it very easy to eat. And it was good, despite a heavy-handed salting that it didn’t need; the sweetness of the crab meat came through. The chips and sauce were both excellent too. 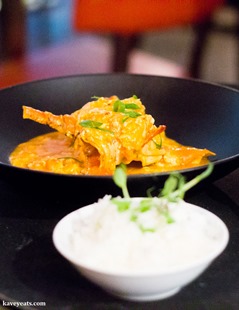 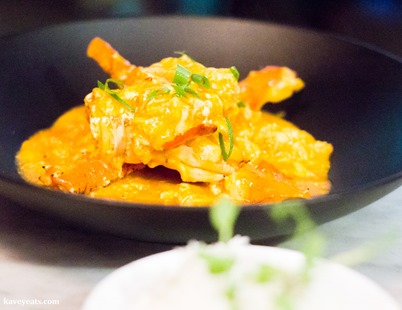 Second, the restaurant’s self-proclaimed signature dish, Singapore Chilli Crab (£23.50) which was delicious if rather lacking in chilli, though this is, I’m told, very much in keeping with the Singapore style. The sauce is a mild curry one into which a generous portion of crab has been mixed. Served with plain rice, it’s a comfort food kind of dish. 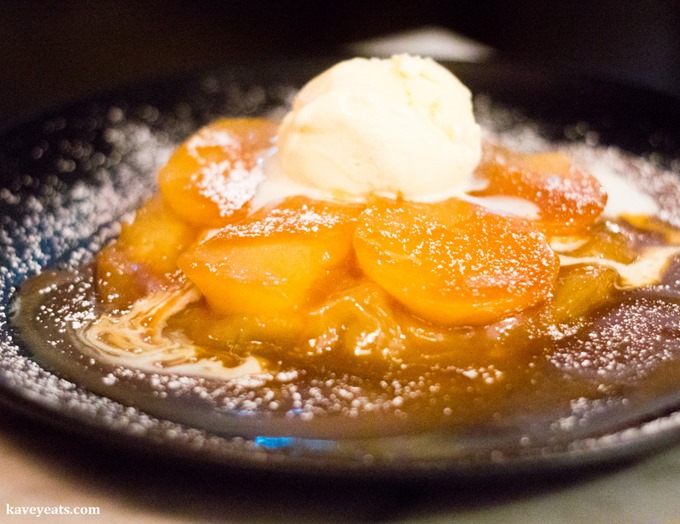 For dessert, we enjoyed a delicious pear tarte tatin with butterscotch sauce and vanilla ice cream, only available for two to share (£11). Well executed, it was a rich and indulgent end point to the meal.

Any hang ups? A few little service issues to overcome, but it’s a new opening so I have hope that this will improve. Our waiter Emanuel was absolutely excellent, not only knowing the menu inside out, but keen to help us order the right dishes, and very attentive. The rest of the staff were inattentive and hard to flag down, even when Emanuel was busy serving other tables. Bar service in particular was excessively slow and had to be chased multiple times. 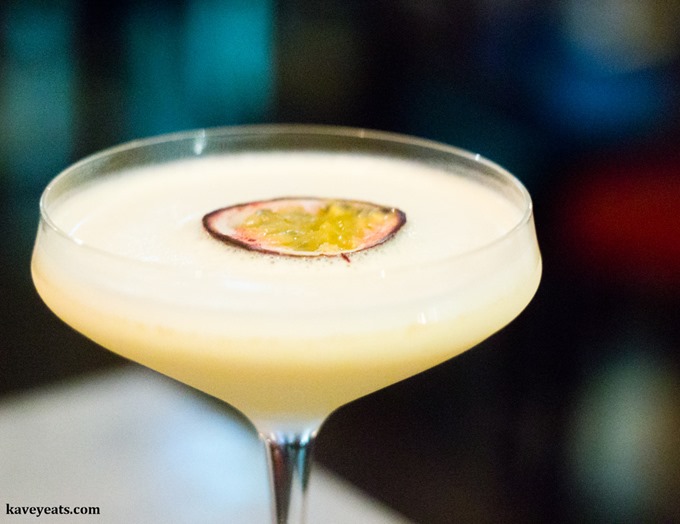 The passion fruit colada (£11) when it finally came was decent, thank goodness!

Overall, we enjoyed the meal, especially the quality and flavour of the crab for which the restaurant is named. Pricy, for sure, though that’s not unexpected given the high rent location. It’s a welcome addition to London’s limited seafood restaurant scene and it’s certainly a nice change to see crab, rather than lobster or oysters, made the star of the show.

Kavey Eats dined as a guest of Fancy Crab.

Please leave a comment - I love hearing from you!21 Comments to "Fancy Crab | Red King Crab in the West End"