Grind is one of London’s hospitality trade success stories of this decade. Since 2011 – when the first Grind coffee shop opened in Shoreditch – founders David Abrahamovitch and Kaz James have launched several more locations, with the latest located in Clerkenwell’s Exmouth Market neighbourhood. The brand has expanded what it offers too, now providing not only great places to enjoy coffee but cocktail bars, restaurants, a late-night club, a recording studio and their own coffee roastery.

Exmouth Market Grind is open all day so you can pop in for coffee, breakfast, brunch, lunch, an afternoon break, drinks and dinner… followed by more drinks! 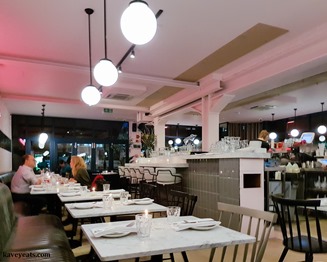 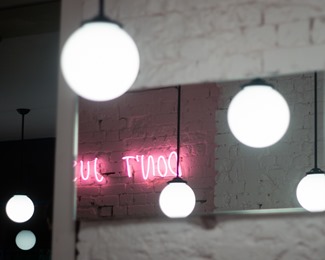 The restaurant seats 90 but the tables are wrapped around a central bar and staff counter so the space doesn’t seem too cavernous; in fact it has a cosy feel to it. Exposed brickwork is whitewashed, reflecting back plenty of light from the windows during the day, and the low-slung orb lights during the darker hours. I’m particularly taken by the pink neon sign that reads ‘Don’t just stare at it, eat it’ – a fair message given that the food looks fabulous, making it impossible not to snatch a few shots for one’s Instagram before diving in. 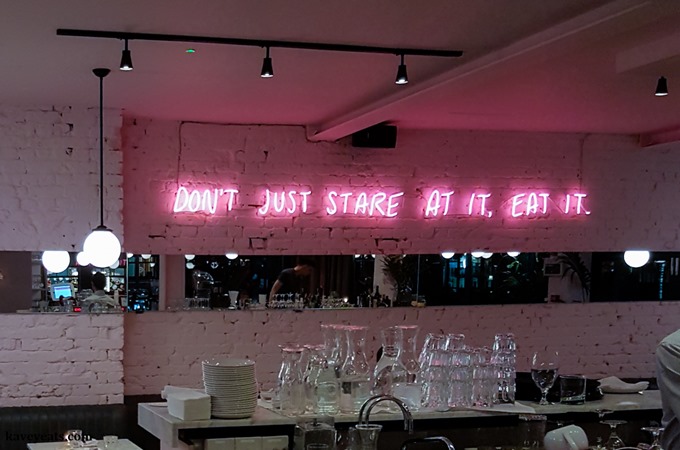 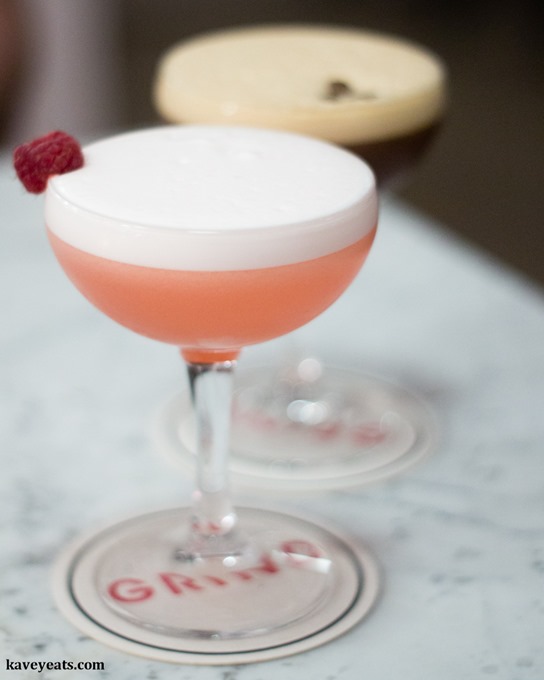 This menu pairs wonderfully well with the cocktail list.

The house special Grind Espresso Martini (£8.50) was a good one – this is a favourite cocktail for both of us – and if you want it a touch sweeter than the norm, the bar are happy to adjust to your tastes. I absolutely adored the Clover Club cocktail (£8.50), a far-too-drinkable mix of gin, raspberry, sugar and egg white. 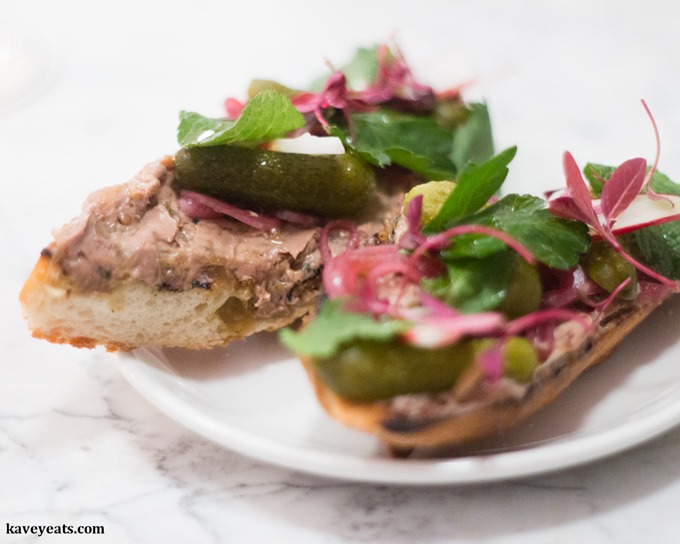 Our waiter advised us to order three to four small and two large between the two of us, though I’d say that the two mains we picked were only marginally larger than the small ones, so you could just as well do seven or eight small plates instead and that would be an equally satisfying dinner.

Our first small plate was the Chicken liver pâté, chutney, radish and pickles (£6), a fantastically well-balanced combination of smooth and rich pate with slivers of sweet red pickled onion, whole cornichons, thinly sliced radishes, parsley leaves and a red micro-herb that I think is amaranth. The ciabatta it was thickly smeared onto was toasted to char, adding great texture along with a little smokiness. Perfect! 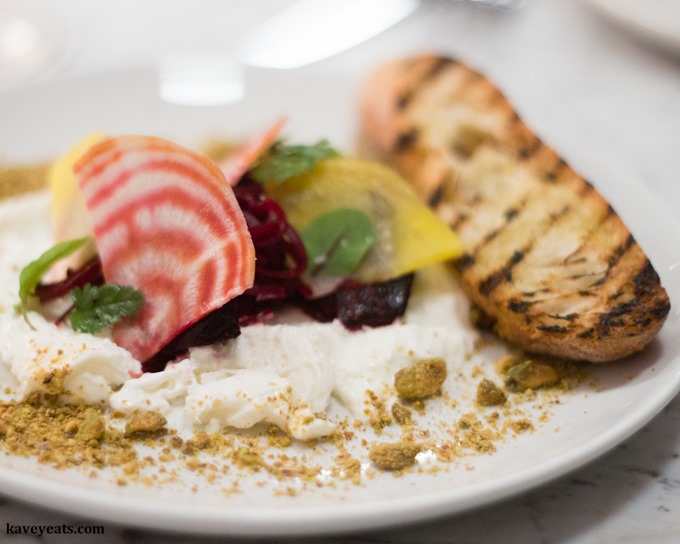 Next came Heritage beetroot, burrata, pistachio, ciabatta (£7). The burrata wasn’t as creamy liquidy as I expected, though it was decent enough. I liked the chunks of red beetroot and the spaghetti-like strands but the thin slices of yellow and striped pink beetroot were a touch dried out. Charred toasted ciabatta was once again an excellent foil to the rest, and the pistachios, which I thought would be superfluous, added both flavour and a welcome textural contrast. 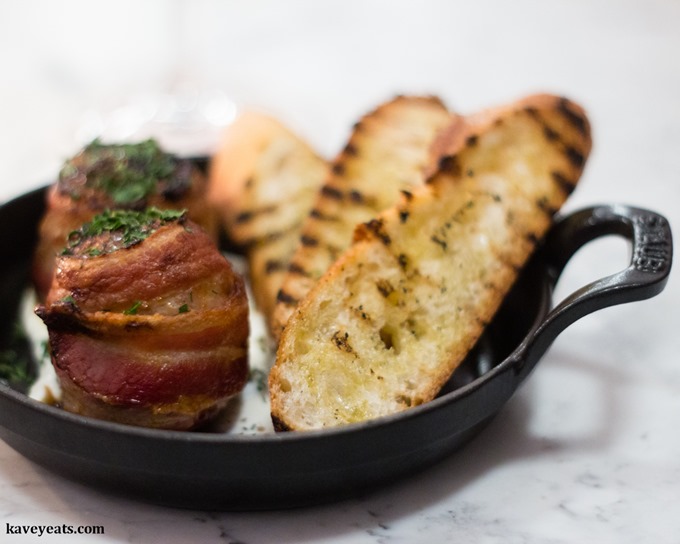 You must order the Chorizo-stuffed dates, pancetta, yoghurt (£6)… MUST ORDER! I am sure you can already imagine how good the combination of spicy chorizo, sweet dried dates and salty savoury bacon were together? Yep, that good! Underneath was a slick of creamy yoghurt, and more of those ciabatta toasts (which I didn’t get bored of, by the way, because they were so good), both a nice addition to the main meat-fruit. 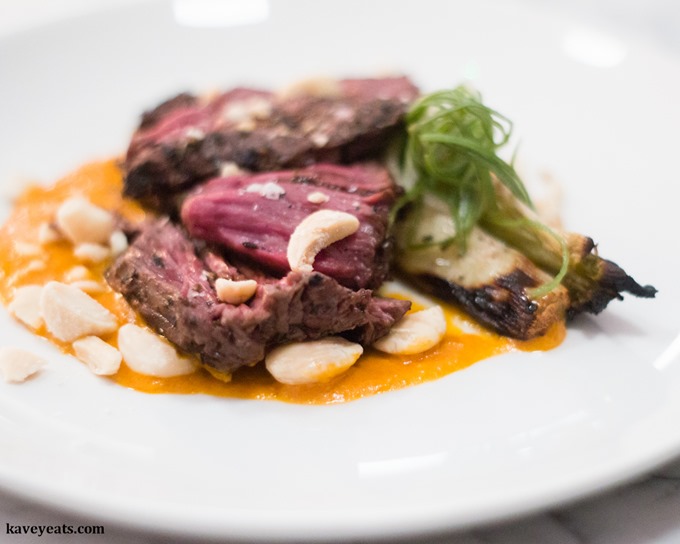 Both of us felt the Butchers steak, red pepper, almonds (£8) would be better without the almonds, or least a lot less of them; I’m sure they were added to provide a crunchy texture against the deftly-cooked steak, delightfully soft charred spring onion (or was it a tiny leek?) and slick of tasty red pepper sauce. No big deal though we just ate around them, and mopped up some of that sauce with ciabatta stolen from the chorizo-stuffed dates! Very tasty. 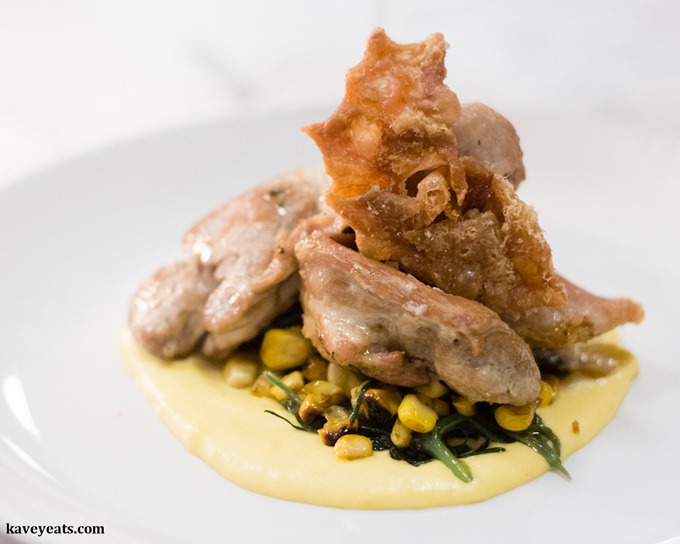 Chicken thighs, monksbeard, corn, lemon (£11) was one of our favourite plates of the evening. The thighs were propped up over a slick of pureed corn sauce that was utterly, blissfully smooth, between them a pile of corn kernels and wilted monksbeard – sweet, salty and lemony goodness. The crown on this king of dishes was the curling shard of chicken skin crackling, all the better for being mine all mine, since Pete’s not a fan. I am still dreaming about this dish. 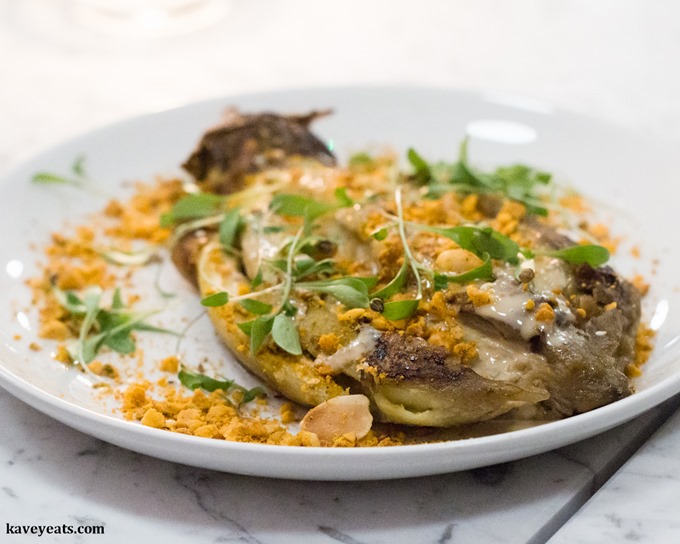 Our second large plate was Burnt aubergine, tahini, nuts, seeds (£9). The aubergine was beautifully soft, just as it should be and pretty too with it’s coat of little green leaves and bright yellow peanuts. But there wasn’t enough of the tahini sauce to give it much flavour, and we found it an altogether too bland dish. It was not helped by comparison to one of our favourite Japanese dishes nasu dengaku in which the charred silky softness of aubergine is paired with a richly sweet and savoury miso glaze, giving it a punch of flavour. While we didn’t hate this, we didn’t bother to eat more than a couple of forkfuls each before abandoning it. 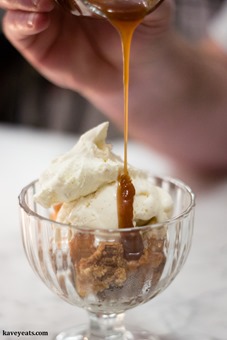 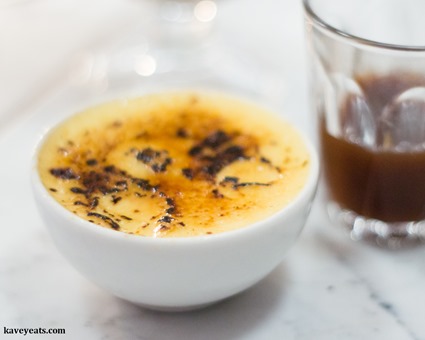 A little full for desserts but we had to try, didn’t we?

First up,  a decadent (and filling) Hot apple crumble sundae (£6) – basically an upside down apple crumble with stodge (as I think of crumble) and cinnamon-laden apples at the bottom, then ice cream and cream over the top. Hot caramel sauce was served in a little glass alongside – Pete did the pour-over honours and I scraped the glass clean with my spoon, only barely resisting the urge to wipe the rest out with my fingers. Good stuff. The rest of the pudding also tasted great, but with the crumble and apple hidden in the depths of the glass bowl, it was not the easiest to eat without deep diving to get to the apple and crumble.

Second, Burnt vanilla cream (£3.50), a perfectly-sized small pot of rich and silky vanilla cream with a admirably restrained brulée topping; I’m not a fan of thick discs of solid sugar that need a pick axe to break through! I love the inclusion of smaller desserts like this, for those meals when you just fancy a few spoonfuls of sweet but are too full for something more substantial. Grind has three such options on the menu.

Our meal, with the eight dishes above and two cocktails each, came to £90.50 before service though we could happily have dropped the aubergine and apple crumble and still been very satiated, which would have dropped the bill to £75. Reasonable prices for delicious cooking – I love this kind of shared small plate eating as it lets me taste lots of flavours in one meal, my favourite way to eat.

If Grind are looking for their next location, I am sure I could suggest a few deserving properties up in Finchley… oh, do I live in the area you ask, well, ahem, that’s purely a coincidence!

Please leave a comment - I love hearing from you!31 Comments to "Small Plate Dining at Exmouth Market Grind"