Elizabeth 1 granted the Governor and Company of Merchants of London Trading into the East Indies an English Royal Charter on 31 December 1600, making it the oldest amongst several similarly formed European East India Companies, the largest of which was the Dutch East India Company.

As the various names imply, it was a company formed for pursuing trade with the East Indies, a term used to refer to South East Asia. Instead, the company ended up trading mainly with the Indian subcontinent and China, trading mainly in cotton, silk, indigo dye, saltpetre and, of course, tea and opium.

On merging with a rival English company in 1708, it became more commonly referred to as the Honourable East India Company, colloquially called John Company or Company Bahadur (meaning brave or authority).

It all sounds jolly exciting doesn’t it?

Certainly, we might think about romantic notions of adventure and exploring and innovation and discovery… and perhaps, in it’s earlier days, that’s what it was like, its officers travelling far and wide to find exotic goods to bring home for sale.

At first, the Company was simply given rights by local rulers to establish factories and trading posts in coastal positions. However, over time, the company came to rule large areas of India, exercising military power, assuming administrative functions and moving away from its original commercial pursuits. It’s dominion over the Indian subcontinent is variously referred to have begun in 1757, when it won the Battle of Plassey and the Nawab of Bengal surrendered to the Company, in 1765, when the Company was granted the diwani, or the right to collect revenue in Bengal and Bihar, or in 1772, when the company established a capital in Calcutta, appointed its first Governor-General and became directly involved in governance.

At its peak, it employed about a third of the British workforce and accounted for an enormous share of world trade. It had a 24,000-man army and even issued its own currency coin.

Officially, Company rule lasted until 1858 when, after the Indian Rebellion of 1857, the British government passed the Act for the Better Government of India and the Crown assumed direct administration of India; the new British Raj. EIC’s armed forces were incorporated into the British Army.

However, in reality, Pitt’s India Act of 1784 had already brought the administration of the East India Company under the control of the British Government who were keen to address wide spread concern about corruption and poor governance by the Company, which had so badly mismanaged its affairs as to be forced to turn to the British Government for financial aid. This, despite the fact that individual Company officers returned home with immense personal fortunes. The act set up a system that allowed the government to supervise and regulate the Company, rather than take full direct control for itself, as occurred 74 years later.

Although the company was effectively dissolved in 1858, it was formally dissolved only in 1874, by an act of parliament.

There were many reasons for the Indian Rebellion.

The old aristocracy had slowly seen their powers erode, as the Company annexed states and took over administration. They were also indignant about the lack of courtesy shown to them and the theft of their treasures such as precious jewels. The nobility were angered by the Company’s interference in traditional systems of inheritance.

Rural landlords in modern Uttar Pradesh lost many of their landed estates to peasant farmers as a result of land reforms. Many were also vexed by heavy-handed revenue collection which resulted in huge debts or loss of their lands.

Many sectors of society were upset about the social reforms introduced by the Company including the abolition of sati (where widows were immolated on their husbands’ funeral pyres), the legalisation of widow remarriage and the lack of adherence to the caste system when employing and promoting Indians. European schools were said to be replacing Indian religious instruction with other subjects and exposing girls to morally unacceptable teachings. There was strong suspicion that the British wanted to supplant Indian religious traditions with British ones.

The justice system was considered to be very much stacked against Indians who tried to bring cases against Company officers. Brutality and crime on the part of the officers often went unpunished.

In addition, the sepoys (Indian soldiers in the service of European military forces) were grieved by a wide array of issues, not least unfavourable changes to their terms of service and the short-lived introduction of tallow-greased cartridges. As the soldiers had to bite the cartridges open to release the powder before loading their rifles, this would mean they would ingest some of the animal-derived tallow. For high-caste sepoys, this would strip them of their caste and was therefore hugely offensive.

The original company itself dissolved in 1874. What Mr Mehta purchased, back in 2005, was the registration of the name, previously owned by UK private investors (1).

Mehta has been quoted expressing a great feeling of redemption in buying back the company that once owned India (1)(4). He has also dismissed any concerns about reopening the old wounds of colonialism, saying that many thousands of Indians have contacted him from all around the world, expressing support and joy that an Indian now owned EIC (2).

Instead of focusing on the oppressive side of the East India Company, Mehta chooses instead to remind people about the positive influences on India such as the English language, ports and cities, the railway network, the civil system of government and more (3).

Of course, as an experienced importer and businessman, Mehta also knows the enormous value of a 400 year old, internationally recognised brand; the world’s first multinational organisation. It would be impossible to create a new brand of this magnitude, even in a lifetime (4). Associated with bringing all manner of exotic goods from East to West, the East India Company is also indelibly associated with the history of the British Empire and Mehta plans to bring the romance of that era to modern day shoppers (3). In fact, Mehta made many international trips to talk to museum curators and historians about EIC’s history, to ensure that he fully understood its heritage, explaining that he feels his role as custodian of the brand is a great responsibility (4).

Mehta, who himself moved to the UK over 20 years ago, has started by launching a store in London as well as an online shop, currently selling food and drink items. The plan is to open further stores, and to expand internationally, including into India, one of the world’s fastest expanding economies, with a growing appetite for luxury goods.

I was invited to review the new East India Company products and suggested an item from 3 or 4 from their various categories, which include tea, coffee, chocolate, wine, condiments, biscuits and cordials.

On the website, you’ll find much flowery language describing the history of the company and its impact on the world’s tastes and opinions, rules of commerce, communities and countries. It tells how the employees were explorers, traders and innovators who took risks, broke new ground and sometimes got it wrong (this is as much of a nod to the darker sides of the Company as you’ll find).

Whilst I’m fascinated by this attempt to pull the best bits from a historical institution into the present, the proof is, as they say, in the pudding.

Unfortunately, as you’ll see below, two out of four products are just not good enough to justify their price tags nor to live up to the promise of the brand. 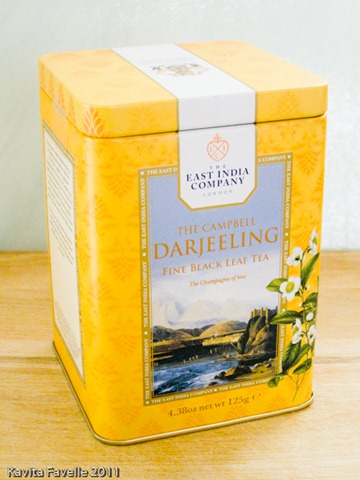 Tea was the one thing I had hoped the new East India Company would get right, being so strongly associated with the original Company. Sadly, I was hugely disappointed with the Campbell Darjeeling which was bland and dusty and lacking any complexity of flavour. Good Darjeeling tea has a wonderful hint of citrus fruit and is really light and refreshing. This tea had none of those qualities. It’s actually so poor I’m not going to finish it, which is saying a lot for me. 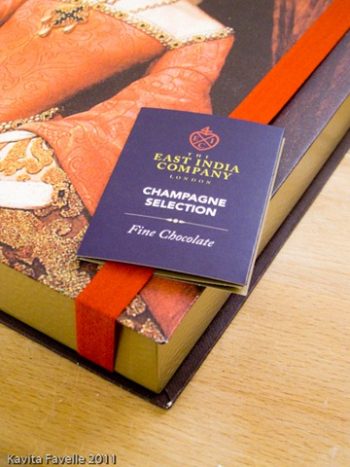 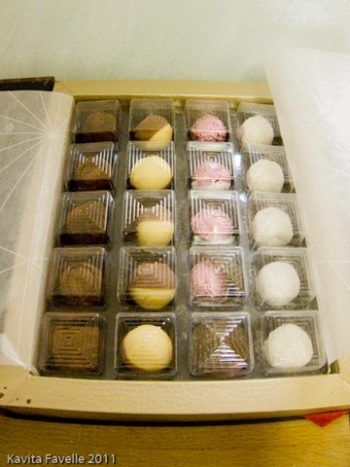 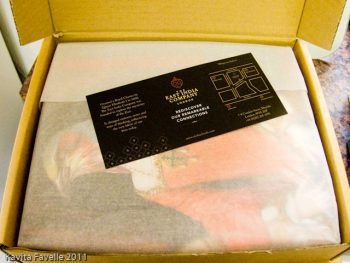 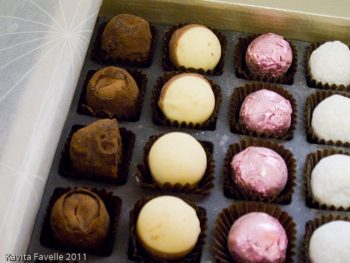 I really like the box designs, most of which feature unusual, colourful art work such as my “Scarlett Princess” with the head of what looks like a lilac breasted roller on the body of a princess. Sadly, the champagne truffle contents disappoint, being far too sweet and sickly. I know I’m fussy about my chocolates, but these reminded me of cheap fiver-a-box chocolates and they simply don’t justify the £25 price tag. 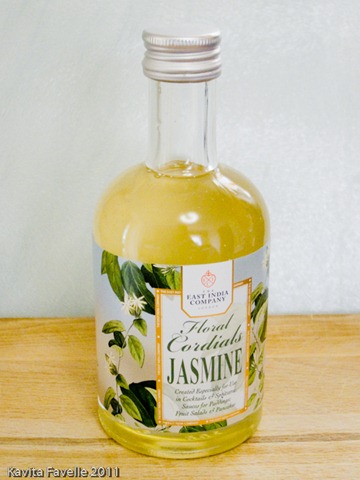 I like the range of cordials on offer, though I notice that this jasmine flower cordial is no longer listed in the online shop. £7.95 is not an unreasonable price either. And the good news is that I like the product. Thus far I’ve only used it, diluted, as a drink, but am keen to experiment with using it in cooking. 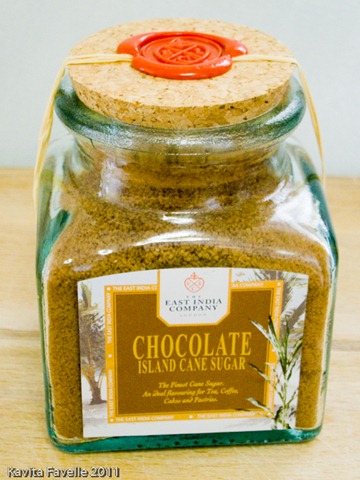 As with the jasmine cordial, the chocolate sugar is no longer listed in the online shop, though you can still buy Demerara, Guadeloupe and vanilla sugars. £10 is expensive for the size of the jar, but it’s an attractively packaged gift and I’d consider buying it as such, though probably not for myself.

I wasn’t able to review any of the range of salts, but do find them appealing, sold in the same cork-lidded jars as the sugar, and at the same price. There’s a Pacific smoked salt from the USA, a Persian blue salt from Iran, a pale green Bamboo salt, an inky dark Hawaiian black salt produced in natural lava pans and a Hawaiian red salt that gets its colour from local clays. These are all quite intriguing and would probably be a welcome gift for a cook who likes the unusual.

As you can see, I didn’t think too highly of the products I reviewed. They simply didn’t live up to the promise in terms of quality, especially given the pricing. Even during a recession, there is growing interest in really good produce from perfectionist producers; the East India Company needs to up its game.

Revising my history for this post puts me in mind of my favourite professor at university; this post is dedicated to professor J J Scarisbrick.

Please leave a comment - I love hearing from you!4 Comments to "The East India Company: Then & Now"