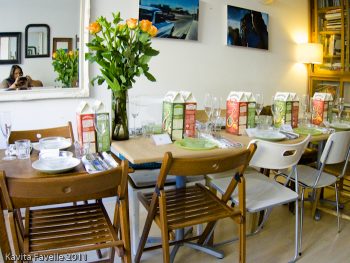 One fine and sunny Saturday morning, earlier this month, I made my way to London Fields to enjoy a very fine brunch organised by Jordans Cereals and laid on by the lovely Uyen of the Fernandez & Leluu supper club.

The brunch was to introduce a group of us to the latest product from Jordans Cereals, their Creations Range. As well as trying the two new cereals, we were also treated to a huge selection of goodies from the most incredible lobster salad (with a genius passion fruit, lime and honey dressing) to home-made bacon and cheese pastry whirls, quiches and muffins and more, not to mention the tea, coffee, juices and prosecco – yes, prosecco in the morning! Oh and some fabulous panna cotta to finish… 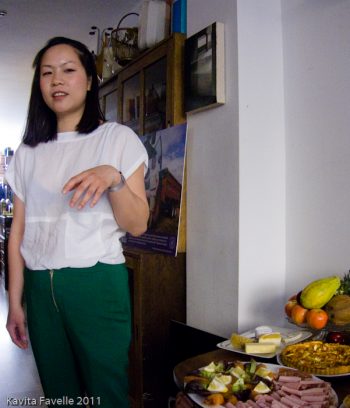 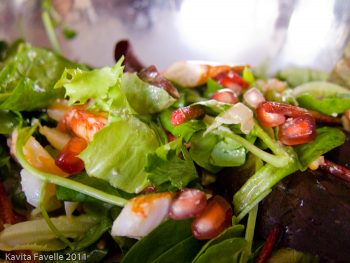 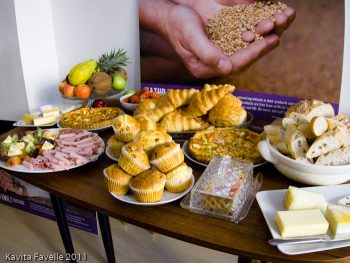 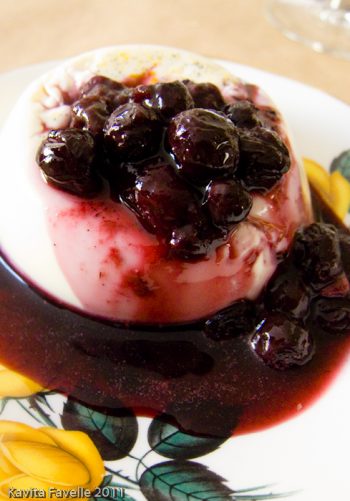 16 months ago I met some of the Jordans Cereal team, including one of the founders, Bill Jordan. 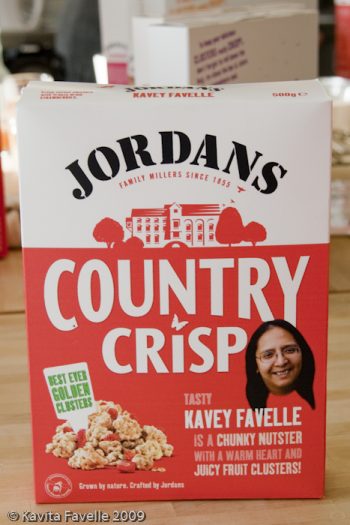 I had lots and lots of fun using some of their Country Crisp cereal in a cake recipe, learning about how the product was developed and making up my own perfect combination of ingredients to take home in a box with my face on it!

I was particularly happy to learn, from Bill, that all the cereal used in Jordans Cereals is grown to Conservation Grade (by more than 50 farmers around Britain). What this means is that the farmers are paid a premium for their produce in return for creating nature-friendly habitats on 10% of their farmed land, thereby encouraging biodiversity – they plant wildflowers, clover and other plants to provide pollen, nectar and food for insects and birds, provide grassland habitat that will shelter spiders, beetles and small mammals and support wildlife by retaining hedges, ditches, old barns, ponds and woodland. As a very keen wildlife enthusiast and amateur wildlife photographer, wildlife and habitat conservation is a cause I’m passionate about, so this initiative is something that makes me very happy indeed. You can learn more at the Conservation Grade website.

Like their other products, the Creation range is made from Conservation Grade oats and all the other ingredients used also adhere to high environmental standards, with no artificial colours, flavours, preservatives or GMOs.

Whereas the original granola range is super crunchy (which I really love) and the Country Crisp range gives a much lighter, puffier crunch (which I like, but not as much as the original granola), the new Creations cereals are soft and chewy. The oats are toasted lightly, sweetened a little with honey, combined with a little oil (to soften and preserve without the aid of artificial preserving agents) and then just a small number of ingredients such as cranberries, apples, cinnamon are added.

Ruth Fergyson, Head of New Product Development, explained that some of their potential customers find some of their cereals, those with lots of added fruits and nuts, often have an ingredient they don’t like and which puts them off. With the simpler combinations in Creations, Jordans are offering something to those consumers. The range is also designed to appeal to those who want a softer cereal than the typical hard granolas.

The two flavours in the range so far are Juicy Cranberry & Golden Honey and Baked Apple & a Hint of Cinnamon. Of the two, I prefer the cranberry one, which surprises me as I am not usually a cranberry fan, but these are soft and sweet with just a hint of sharp that contrasts with the honey.

Between the cereal and Uyen’s enormous feast, Rachel Kerr, Jordans’ Head of Brand Communications, invited us to try our hand at coming up with the next Creations flavour combinations using lots of ingredients provided in bowls along the table as inspiration to kick start our imaginations. 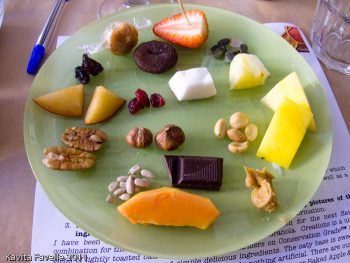 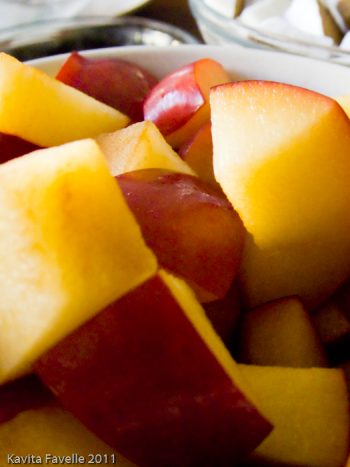 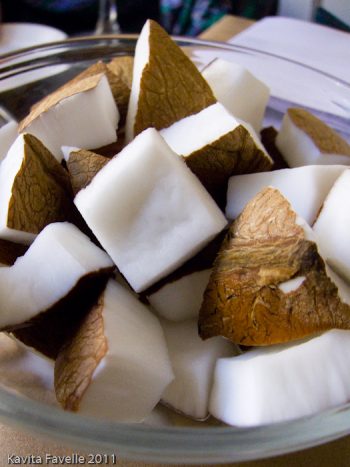 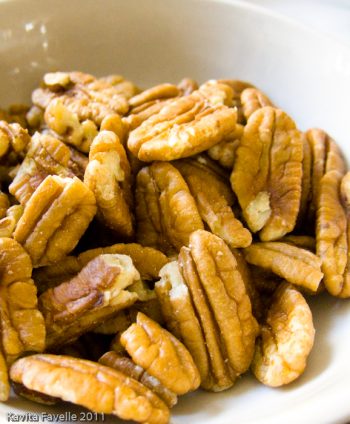 With a beautiful green KitchenAid Artisan stand mixer offered as a prize for the winner, I quickly got my thinking cap on to see if I might be the one to suggest that perfect combination of textures and flavours for the next Creations… something that would appeal to the development team at Jordans and, most importantly, to their consumers.

I came up with a few ideas… my first one was figs with vanilla (plus the honey mixed in with the oats), a combination I think would be particularly nice to eat with natural yoghurt… I then wondered whether one could combine natural yoghurt into the cereal itself, much like those yoghurt covered nuts and dried fruit one can buy from health shops.

The next combination that jumped out at me was sticky dates with chewy toffee, a duo which works so well in sticky toffee puddings…

Ever sweet toothed, I also wondered whether a mocha combination would be pounced on by breakfast cereal eaters, or left on the shelf as being too indulgent for the morning… it would depend if they were coffee and pain au chocolat kind of people! As a big fan of mocha drinks and of coffee chocolate, I know I’d enjoy it!

But in the end, I chose to think about the adage that “what grows together goes together” and tested my favourite suggestion for a new Creations flavour:

What Grows Together Goes Together
Kavey’s Apricot & Pistachio Creation

Pistachios are what are referred to as “culinary nuts” – not actually nuts, botanically speaking, but classified as such by our culinary usage. They likely originated in Western Asia/ the Middle East, and the region remains the main producer of pistachios today, with Iran growing more than any other nation. Their shells remind me of cupped hands, clasping the nut in a tight grasp. Cracking them open one after the other, to reveal their pretty purple-red skins and the pale green flesh inside, is part of what makes eating them so enjoyable. Pistachios taste a little like almonds, but with a softer texture and more subtle yet distinct flavour. 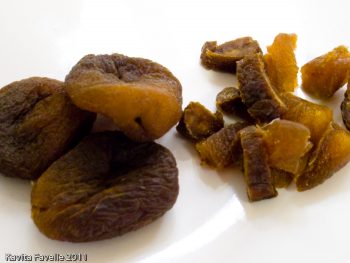 Apricots are also thought to have originated in Western Asia, most likely in Armenia, though they’ve been cultivated so long, this is not altogether certain. These days, the largest producers are Turkey, Iran and Italy. Part of the prunus genus, which also includes plums, cherries, peaches and almonds, the soft amber-coloured fruits are a lovely balance of sweet and tart. Surprisingly, for a lover of fresh fruit, I adore dried apricots even more than fresh ones, particularly the meltingly soft, dark brown ones with their subtle caramel flavour and sweetness.

Interestingly, apricot kernels are widely used too – often so sweet they are substituted for almonds, and forming a key ingredient in amaretto liqueurs. Perhaps, edible apricot kernels might also be mixed into the cereal as well, for a little added crunch?

Trying out my combination

Of course, I couldn’t propose my creation without testing it first, so I improvised. Using the cereal from my box of Juicy Cranberry & Golden Honey Creations, I discarded the cranberries (to be eaten later!) and mixed it with the Turkish apricots and Iranian pistachios I purchased especially. 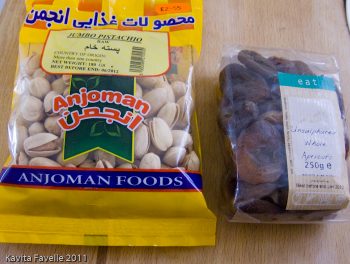 I thought the combination worked wonderfully well, both visually and in terms of taste and texture.

A lovely thought to leave you with:

The Turkish have an idiom “bundan iyisi Şam’da kayısı” the meaning of which is “it doesn’t get any better than this“. The literal translation, “the only thing better than this is an apricot in Damascus” tells you all you need to know – for something that is the very best it can be is a delicious apricot from Damascus!

Please leave a comment - I love hearing from you!6 Comments to "Creative Combinations: Kavey’s Apricot & Pistachio"