Cinnamon and Salt: Cicchetti in Venice: Small Bites From the Lagoon City by Emiko Davies is a cookbook reader’s book, a title for those who are as eager to read about the culture, history and stories of a cuisine as they are to make the recipes. 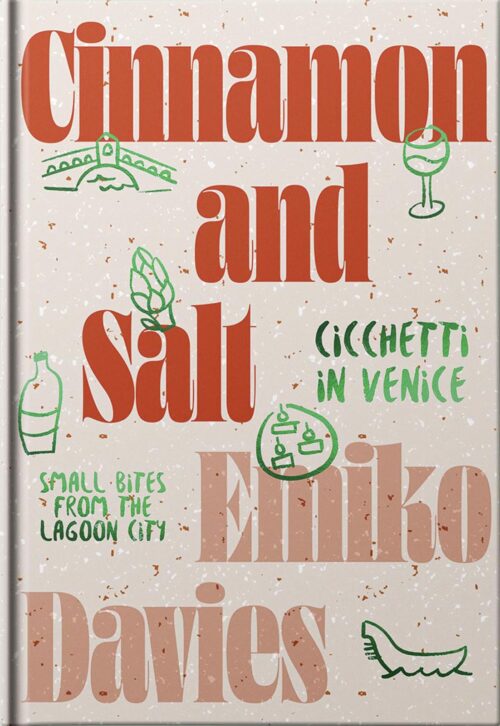 Cicchetti (pronounced chi-ke-tee) are small morsels of food served alongside drinks in the bacari (bars) of Venice. They are sometimes described as canapes or starters, but these wholly Venetian nibbles are not so much the start to a multi-course meal but a small bite enjoyed with a glass of wine, or an aperitivo. Venetians do sometimes make a light meal of several cicchetti, but often they are simply a snack to have with a drink during the day, or before or after a meal.

Bacari serving cicchetti can be found throughout Venice, with a concentration in the areas where the four sestiere (districts) of San Polo, Cannaregio, Castello and San Marco come together (near the Rialto bridge). On our last trip to Venice, we particularly enjoyed some of the bacari along Fondamenta della Misericordia in Cannaregio. 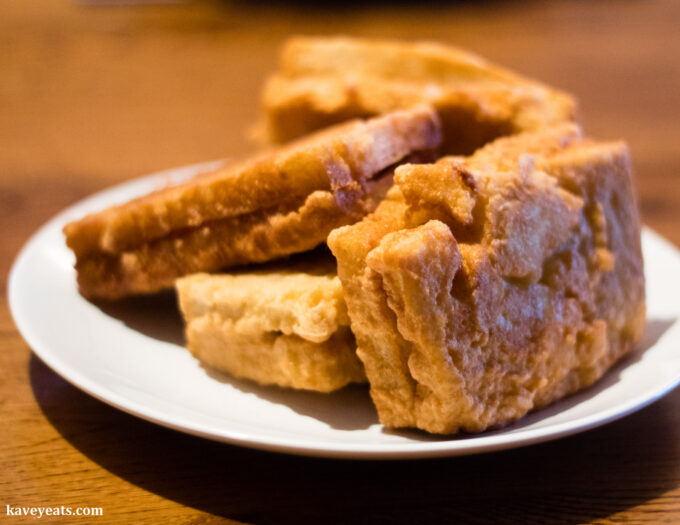 In Cinnamon and Salt, Italy-based food writer and photographer Emiko Davies explores the tales and background of Venetian cicchetti by way of more than sixty recipes covering classic savoury and sweet dishes, and a selection of drinks.

In the Preface Davies (who lives in Italy) shares the story of her personal love affair with Venice, a city she’s adored for many years. Having grown up in Australia, Japan and China, Davies moved to Florence in 2005 to study art restoration and photography, following the completion of her Fine Arts degree (and has also lived in Tuscany and in the province of Pisa, in the years since). She spent four weeks as an intern restoring water-logged prints and manuscripts from the Island of San Lazzaro’s Armenian monastery (between the main islands of Venice and the Lido), a great opportunity to get to know more about the life and culture of Venice. Her trips to Venice most commonly revolve around the Biennale and indeed she’s missed only one since 2005.

Davies has previously published four Italian cookbooks: Acquacotta: Recipes and Stories from Tuscany’s Secret Silver Coast; Florentine: The True Cuisine of Florence; Tortellini at Midnight (a collection of heirloom recipes from the length and breadth of the country); and Torta della Nonna: A Collection of the Best Homemade Italian Sweets.

The idea for Cinnamon and Salt came from her friend Rosa Salzburg, a Renaissance historian from Melbourne who divides her time between Venice, England and Trento (and who provides the book’s foreword). It’s lovely to read how the plan for the book came together over shared visits to Venice, fleshed out on napkins while their children played nearby. A prescient email from Davies’ publisher, Jane Wilson, started the process of transforming those joyous napkin-scribbles into this treasure of a book.

The Introductory chapter provides context for the food of Venice today. Davies references the origins of the city’s modern-day food in both the immense affluence of the Venetian Republic with it’s opulent Renaissance banquets featuring the latest multicultural ingredients and influences brought back from around the world, and the necessary frugality of the local population who cooked and ate ingredients grown and fished locally, generating a thriving street food trade. This duality of origins explains the dichotomy that still exists in Venetian cuisine between local ingredients and those from further afield, and between simple street food and more elegant restaurant dining. It also accounts for why Venetian food is so distinct from the cuisines of the rest of Italy.

Venice’s wealth, during the latter centuries of the Middle ages, was in large part thanks to the success of the republic’s salt and spice trade, and the monopoly enjoyed in trading spices from the East into Europe. The Rialto Market of Marco Polo’s era was one of the world’s most important wholesale markets. Migrants from around the world, attracted to Venice by the city’s vibrancy or the opportunities for global trade, brought with them a myriad of influences to the food – from ingredients, to cooking techniques to specific dishes.

To read Cinnamon and Salt is to take a trip to Venice. Beautiful images throughout the book share tantalising glimpses down one calle or another, architectural details of fine Venetian palaces and humble small businesses, wide open squares populated by people and pigeons, locals reading the paper at a local café, gondolas bobbing on the waters of a quiet side canal, speed boats and vaporetti making their way along the wide open Grand canal.

Recipes are illustrated not only with the usual appealing photograph of the finished dish (along with the occasional process picture where helpful), but are also interspersed with images of the many bacari Davies references in her descriptions of the dishes’ origins and stories; a store front, a table and chair, a hand-written menu, a counter full of cicchetti, and throughout we see the beautiful fresh food of Venice on sale in the Rialto market.

Davies is a professional photographer, and all of the pictures in the book – those of Venice and of the recipes – are her own; the only exception is the portrait of her on the back cover, taken by a friend. I always love when this is the case as it brings a singular focus to the content; words and images inextricably tied together by Davies’ personal vision.

Once you’ve read about the history and context of Venetian cuisine, the book sidesteps into a more practical vein with advice on measurements, cooking times, and servings followed by notes on key ingredients such as olive oil, flour, polenta, eggs, sugar, and salt.

Additional resources can be found at the end of the book, where Davies’ shares a list of favourite places to eat and drink in Venice, a useful map and a list of recommended suppliers in Venice, Australia, the US, and the UK.

In some cookbooks, I yearn for more of an introduction to each recipe; too often the barest of details are provided and sometime nothing at all. In Cinnamon and Salt, Davies provides both scholarly background and personal anecdotes to properly place each dish or a core ingredient into context. For some ingredients (stockfish, baby artichokes, polenta, snails, local wine, soft-shelled lagoon crabs, Prosecco) and some recipes (Sweet-and-sour fried sardines, Fried meatballs, Rose petal jam, Fritole) the Introduction runs to one or two full pages of text before we come to the recipe! Such essays also examine aspects of Venetian art, the wonders of the Rialto market and locally grown produce.

I love this kind of detail and revel in reading the entire book cover to cover the moment my copy arrives.

It’s no doubt evident that I cherish this book for the historical insights of its narrative passages and adore the evocative images of Venice, but the recipes are also a treasure; those we’ve tried thus far have vividly transported us back to our three visits to Venice.

Venetian-style liver (made with lamb’s liver rather than calves’) nails the vinegar-heavy flavour profile I had hoped for and incontrovertibly distinguishes the dish from British liver and onions. 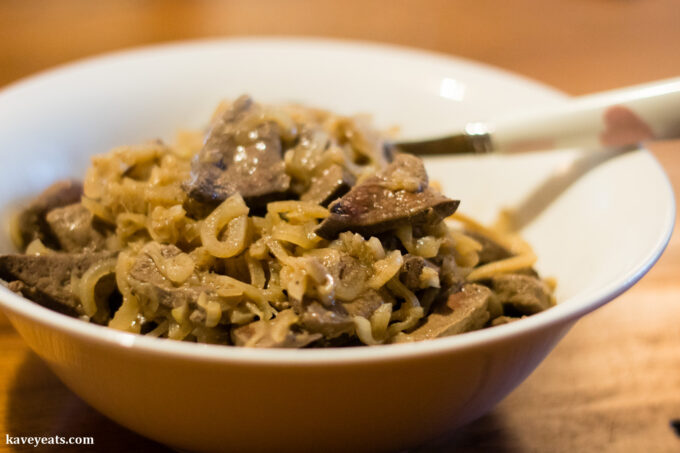 Potatoes in the Venetian style are equally delicious but we didn’t manage to retain distinct pieces of potato, and ended up instead with a delicious hash of soft potato and sweet onion. 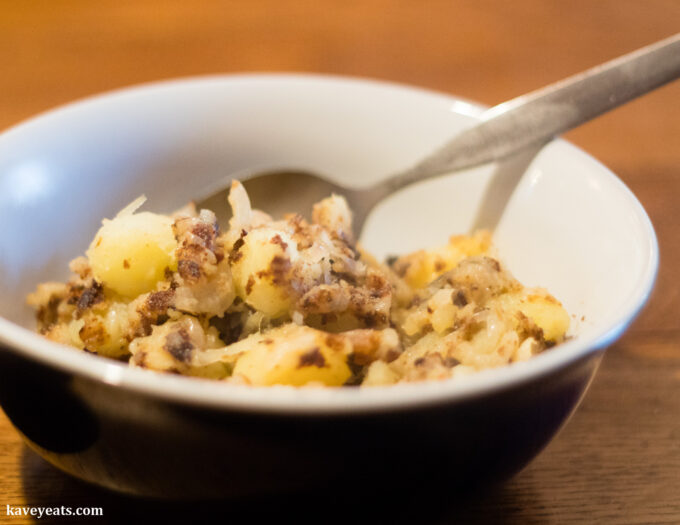 Mozzarella in carrozza – bread, ham and mozzarella encased in a thick, heavy batter – is just like those made by many a good bacaro. This is another transportive dish! 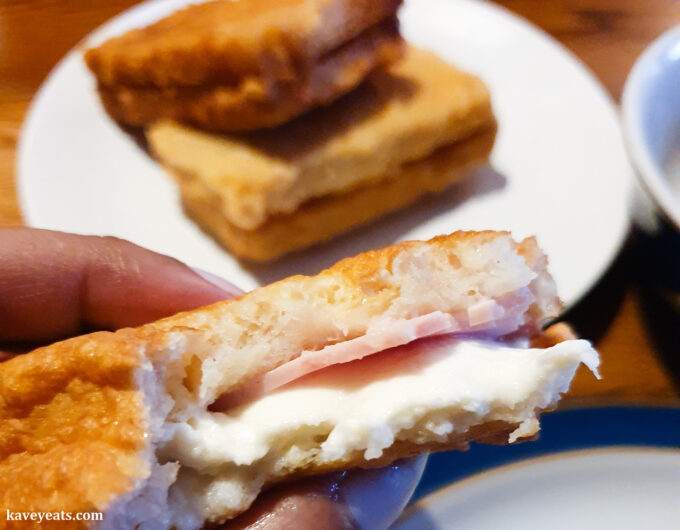 Like the best location-specific cookbooks, Cinnamon and Salt is a siren call for those who already love Venice to return as soon as they can, and an invitation to those who’ve yet to experience her pleasures to make their first visit. In the meantime, Davies helps you bring Venice’s cicchetti culture into your own home.

Recipes From Cinnamon and Salt

We are delighted to share these three recipes from the book, with permission from publisher Hardie Grant [first recipe posting tomorrow].

If you decide to buy this book after reading our content, please consider clicking through our affiliate link, located below.

Please leave a comment - I love hearing from you!17 Comments to "Cinnamon and Salt: Cicchetti in Venice by Emiko Davies"