I’ve been following her cooking and eating exploits on the web for many years, first on the now-defunct BBC food discussion boards and since 2008 on her well-known blog, Hollowlegs. If she isn’t eating she may well be cooking, if she isn’t cooking she might be shopping for ingredients, and if she isn’t doing either of those things, there’s a good chance she’s pondering on what to eat or cook next!

When I learned that she had secured a book deal I was not surprised in the slightest as her delicious personal twists on classic British, European, Chinese and other South East Asian dishes have long made many readers salivate, myself included. In Chinatown Kitchen she draws upon her amazing heritage; Lizzie is Anglo-Chinese, born in Hong Kong where she spent her formative years growing up not only on Chinese food but also exposed to the many cuisines of South East Asia. At 13 she was transplanted to England, where she has been ever since – albeit with some judicious globetrotting to feed those hollow legs!

To describe the book as simply another tome on South East Asian cooking is to put it into a box that it doesn’t neatly fit into. It’s much more than Chinese – or even South East Asian – food made easy; rather it’s a very personal collection of recipes that represent Lizzie’s personal food story. There are classic Chinese and South East Asian dishes, sure, but there are also a fair few of Lizzie’s own inventions including some excellent mashups such as this Chinese Spag Bol recipe and an Udon Carbonara.

Most recipes are illustrated with colourful and appealing photographs, styled but not overly fussy and with the focus firmly on the food.

At the heart of the book is the idea of seeking out ingredients in the food shops of your nearest Chinatown – or indeed any oriental supermarkets or groceries you can find – and putting them to delicious use. To that end, the book is not just a set of recipes but also a shopping and ingredient guide. Add to that an introduction to key equipment and techniques and you are all set to get cooking.

So far, we’ve made two recipes, Chinese Spag Bol and Roast Rice-Stuffed Chicken. We’ve loved both and will certainly be working out way through the rest of my “short” list over coming weeks and months. 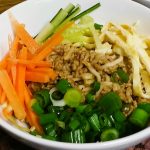 As Lizzie explains, this recipe has little in common with the bastardised ragu we call Spag Bol in Britain – there are no tomatoes, nor red wine for a start – but it is made by simmering minced meat in a sauce and dressing noodles with the results. The predominant flavour comes from yellow bean sauce, with additional notes from soy sauce, hoisin and Shaoxing wine. Lizzie servies it with fresh vegetables and finely sliced omelette. The Roast Rice-Stuffed Chicken is a slightly more involved dish requiring the chicken to be marinated overnight (in a marinade that includes red fermented tofu and oyster sauce, amongst other ingredients) and the sticky rice filling to be made ahead ready to stuff inside the chicken before roasting. I made the wrong call to substitute a black sticky rice I had in my larder for the white sticky rice Lizzie’s recipe stipulates, and I’m sure that was the reason my mandarin peel and Chinese sausage-studded rice wasn’t sufficiently cooked through, but I do want try again with the right rice, as the flavours were fabulous. What’s more, the marinade on its own was super easy and amazingly delicious; even if we don’t have time to do the rice stuffing every time, I know the marinade will be used again and again.