A week before Christmas, London was covered in a blanket of snow. 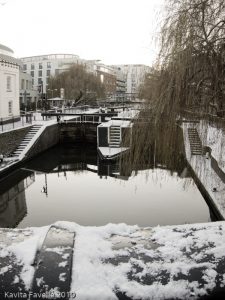 It seemed the ideal time for… ice-cream!

My friends, Edd, Simon and I decided that’s just what we fancied and met at Camden Town tube station to make our way to the chin chin laboratorists, near the lock. 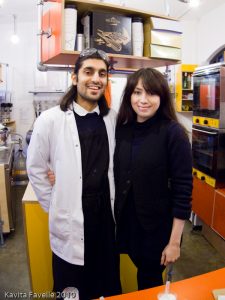 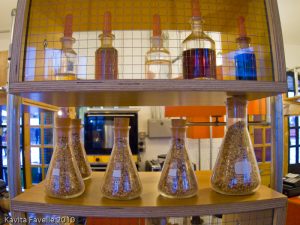 So, what is liquid nitro ice-cream?

Usually ice-cream is made by churning a custard or cream base, together with one’s chosen flavouring ingredients, in a very cold bowl for at least 30 minutes, often longer. Whether you use a cheap bowl-in-freezer machine or an expensive one with integrated freezer unit, it takes time. (Cheaper still is using a freezer and repeated mashing with a fork but I don’t much care for the texture of the result, nor the long-winded effort!)

The liquid nitrogen technique is much faster, not to mention somewhat more dramatic! Pour your custard or cream base into a (metal) mixer bowl, switch the mixer on and then pour in liquid nitrogen. Because it’s so very, very cold (-196°C) the liquid nitrogen freezes the base really quickly.

The reason liquid nitrogen forms those impressive clouds, by the way, is that it boils at -77°C (at normal room temperature and pressure) so as soon as it comes out of the cryo tanks, it vaporises to its gaseous state immediately.

But it’s not all about the impressive show – because liquid nitrogen freezes the ice-cream so fast, there is less formation of larger ice crystals that can make ice-cream feel a little grainy. So, the resulting ice-cream feels much smoother.

All three of us chose nutcracker (hazelnut, baileys and a splash of vodka) and settled back to watch Ahrash make our ice-creams. There are usually three flavours to choose from – vanilla and chocolate, plus a special of the day. 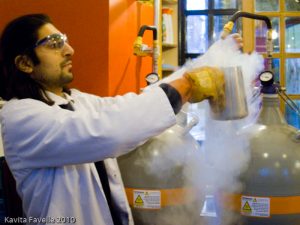 Clearly, Ahrash has a bit of the showman mixed in with his science geek side as he seemed to genuinely enjoy our gleeful reactions, even though he’s done this an awful lot of times, since they opened their doors just a few months ago.

First he poured a liquid ice-cream base into one of the waiting white Kitchen Aid mixers (which look just like my Intergalactic Unicorn). Next, he poured a jug of liquid nitrogen from the 180-litre tanks, dressed in protective gloves and goggles to guard against the effects of the super, super cold chemical. With the liquid nitrogen billowing out of the jug, he poured it into the churning ice-cream mix and let it do its work. 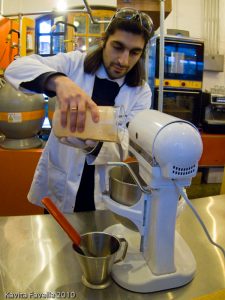 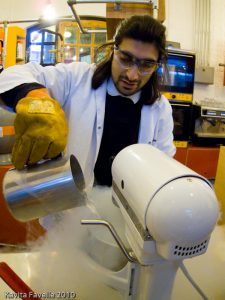 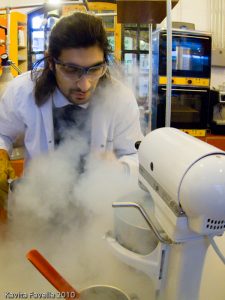 The liquid nitrogen froze the ice-cream mix super fast and within moments, it was ready. 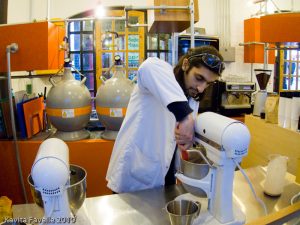 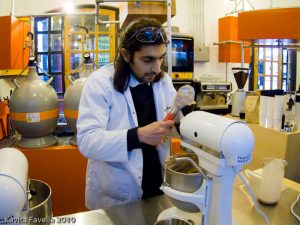 Ahrash scooped it out into a waiting cup, sculpting it carefully to make a well on one side, for the sauce and topping.

Cup and customer were then passed along to Nyisha. 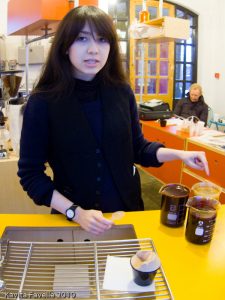 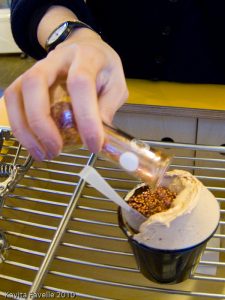 Sauce choices of the day were salted caramel, blueberry or chocolate and the range of toppings included shards of boiled sugar candy, chunks of honeycomb, almonds, hazelnuts, marshmallows…

I went for the rich chocolate sauce with a topping of metallic popping candy rocks! Edd and Simon went for the same ice-cream but opted for salted caramel sauce instead of chocolate. 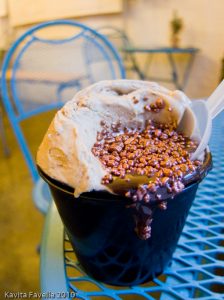 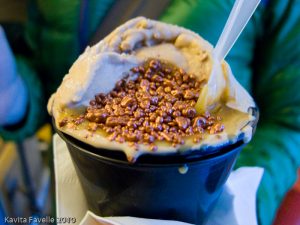 We all agreed the ice-cream was worth the wait. And it was definitely very, very smooth and creamy and full of flavour, even though it’s significantly lower in fat and sugar than many ice-creams.

I really liked the hazelnut flavour and the rich chocolate sauce and metallic popping candy complimented it beautifully.

And as if this wasn’t treat enough, we could not resist trying the Valrhona hot chocolate which we all agreed was superbly smooth, creamy, rich and indulgent. Very good indeed, actually. 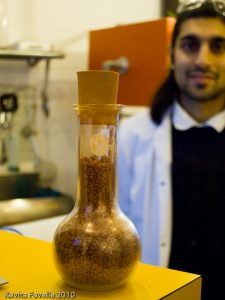 Liquid nitrogen cuisine is not just for the likes of Blumenthal and Adrià and nor is using liquid nitrogen to create ice-cream all about the drama. We thought the resulting extra-smooth ice-cream excellent.

At £3.95 a tub (including sauce and topping), it may seem a little expensive, but I found it rich enough to be a very satisfying portion and struggled to finish mine.

Don’t wait for summer either! There’s something wonderfully rebellious and hedonistic about making one’s way, gingerly, across snowy pavements in search of a snow-cold scoop of the good stuff!

You can find Chin Chin Labs at 49 Camden Lock Place (at ground level, outside and on the railway bridge side).

I’ve been asked whether it’s dangerous to eat liquid nitrogen ice-cream – firstly, virtually all of the liquid nitrogen will have vaporised to gas and dispersed very quickly, leaving very little, if any, in the ice-cream and secondly, nitrogen is not toxic any way. It would be dangerous to drink it in it’s liquid form (or try and eat a solid block of it) only because of the nasty damage the extremely low temperatures would do.

You might want to try this at home. Although it’s not difficult to get your hands on liquid nitrogen, please take proper safety precautions when using it. It can cause serious injury if you don’t.