Recipes (my own and from reviewed recipe books), reviews of cookery books and cookery classes, food and kitchen equipment product reviews – if it’s about cooking or eating at home, it’s here! 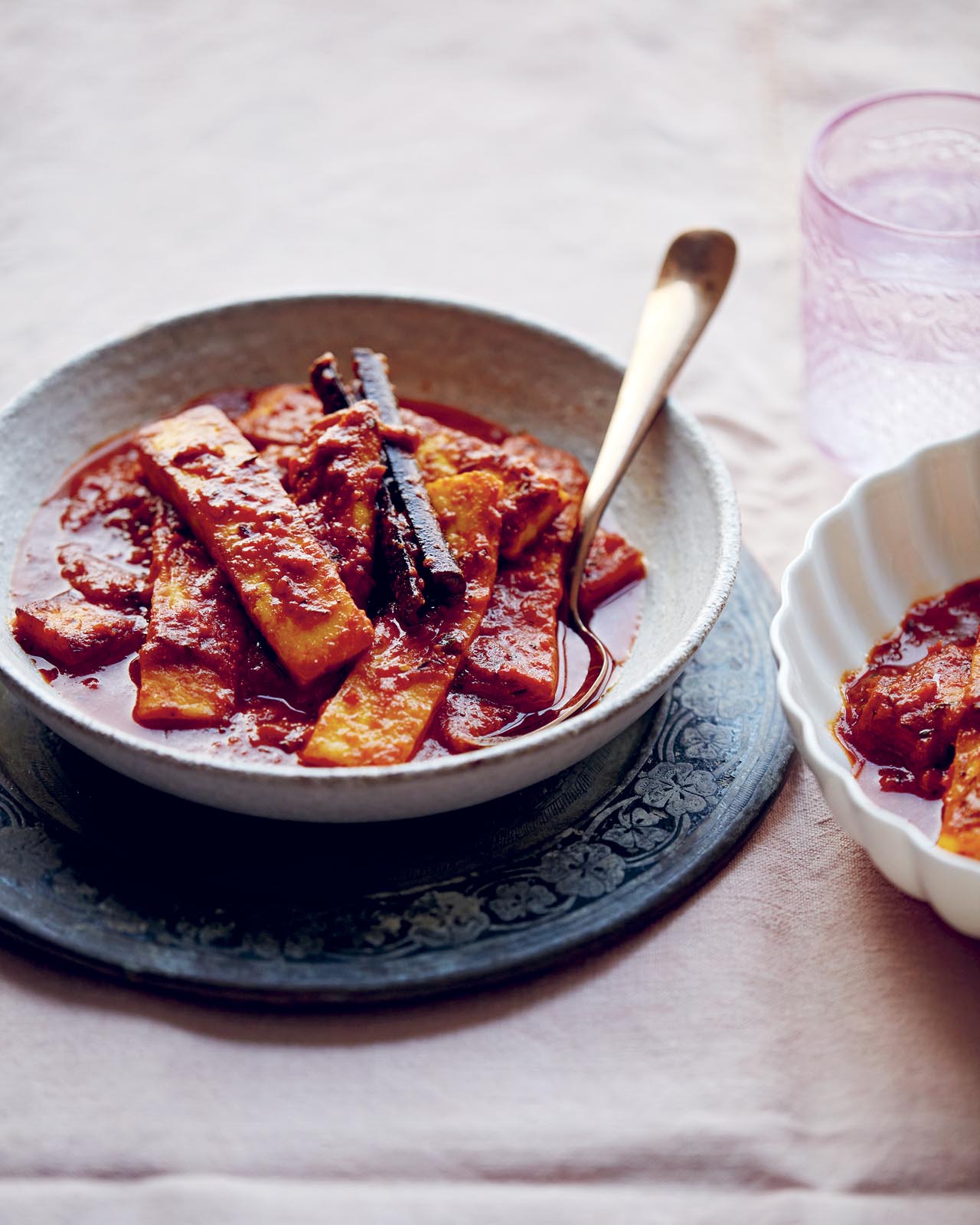 This Himalayan recipe for a simple paneer in tomato curry is a revelation. Slicing the paneer into thin strips rather than cubes (as is more typical in the Indian cooking I’m familiar with) means more surface area to be fried. It really changes the textural mouthfeel of the paneer! The recipe is from Romy Gill’s ... Read more » 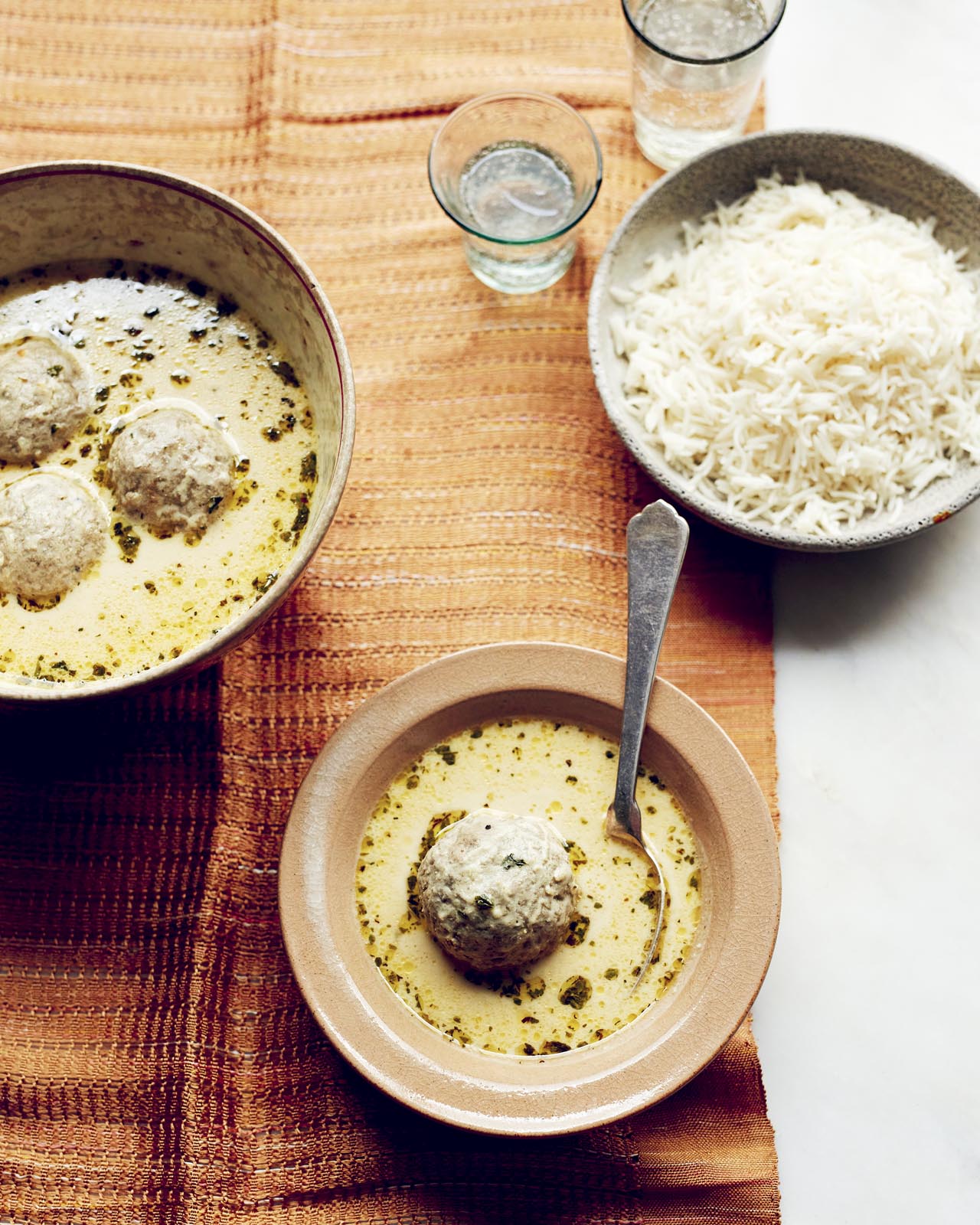 This is a very simple but satisfying dish where the flavour of the mutton is able to sing. It’s from Romy Gill’s ‘On The Himalayan Trail’ cookbook and reflects the simple, wholesome and delicious cooking of the region. The mutton and other meatball ingredients are pounded together into a smooth paste before being shaped into ... Read more » 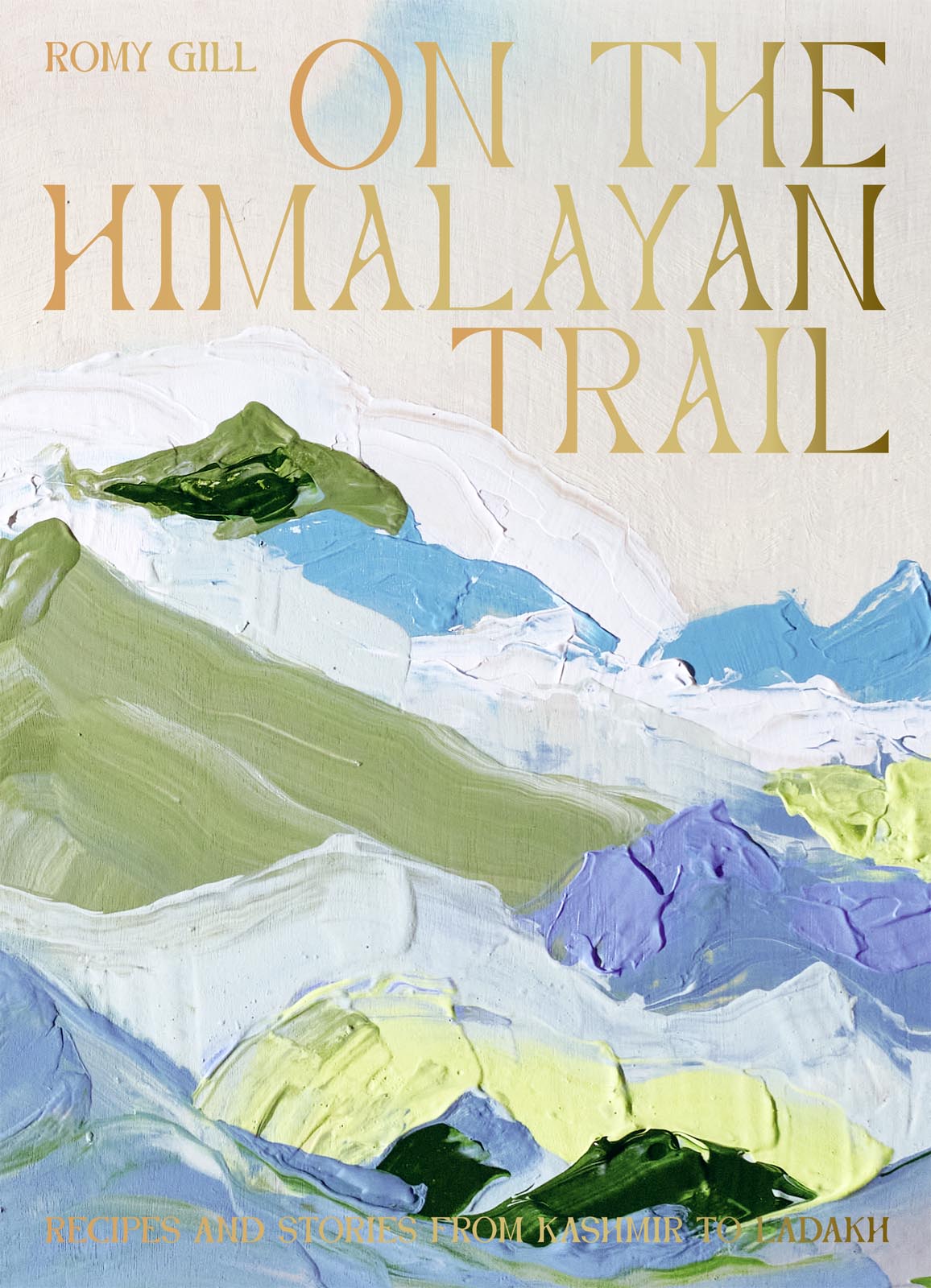 I’m a little behind the curve getting my hands on this beautiful cookbook. On the Himalayan Trail: Recipes and Stories from Kashmir to Ladakh by Romy Gill was published by Hardie Grant in April since when it’s received great feedback from keen cooks. Gill, who was awarded an MBE in 2016, is a British-Indian chef, food ... Read more » 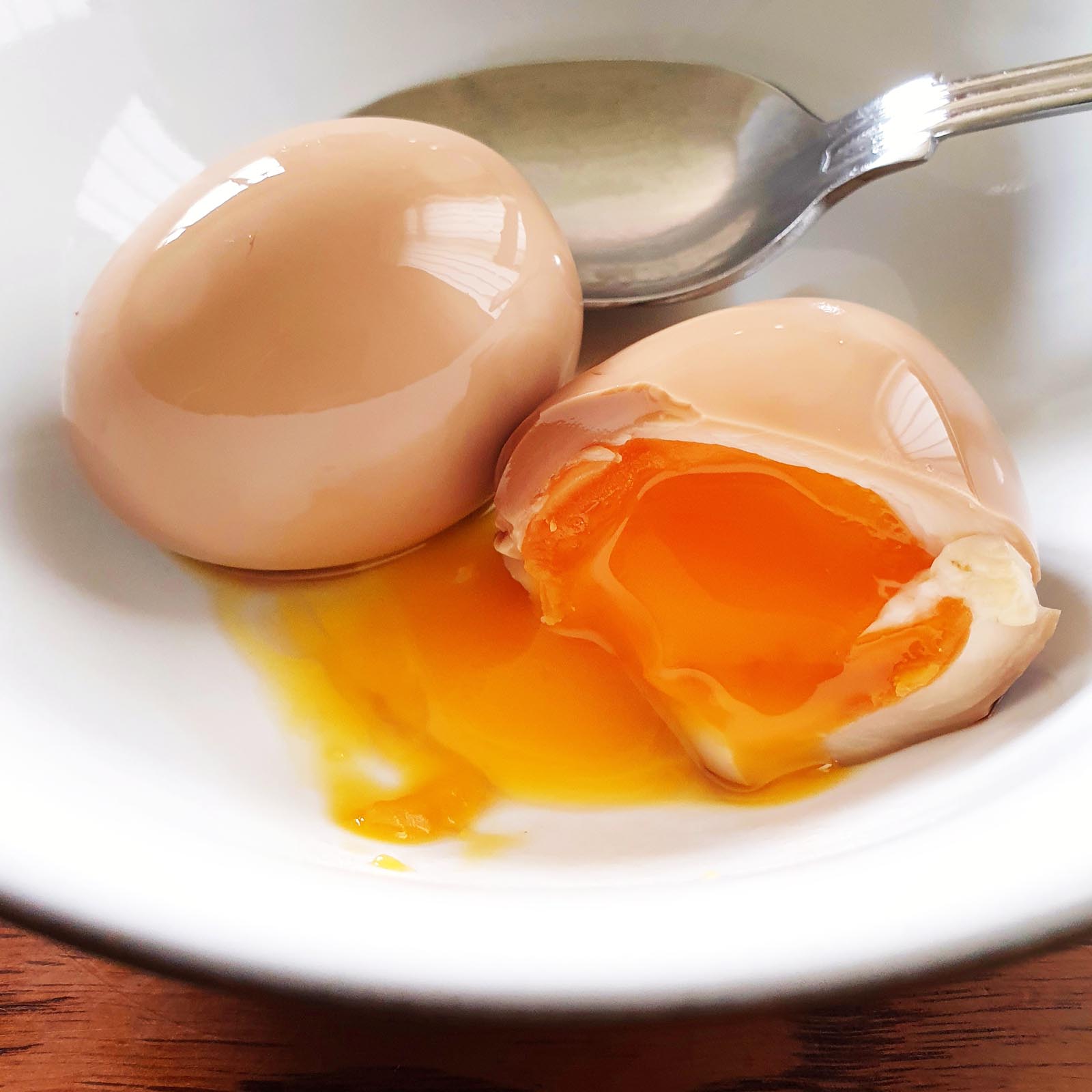 Known in Japan as ajitsuke tamago – often abbreviated to ajitama – ramen eggs are an integral element of a good bowl of ramen and Pete and I adore them! Soft-boiled eggs are chilled (to stop them cooking further) before being marinated in a soy sauce, mirin and sake marinade until the egg whites take ... Read more » 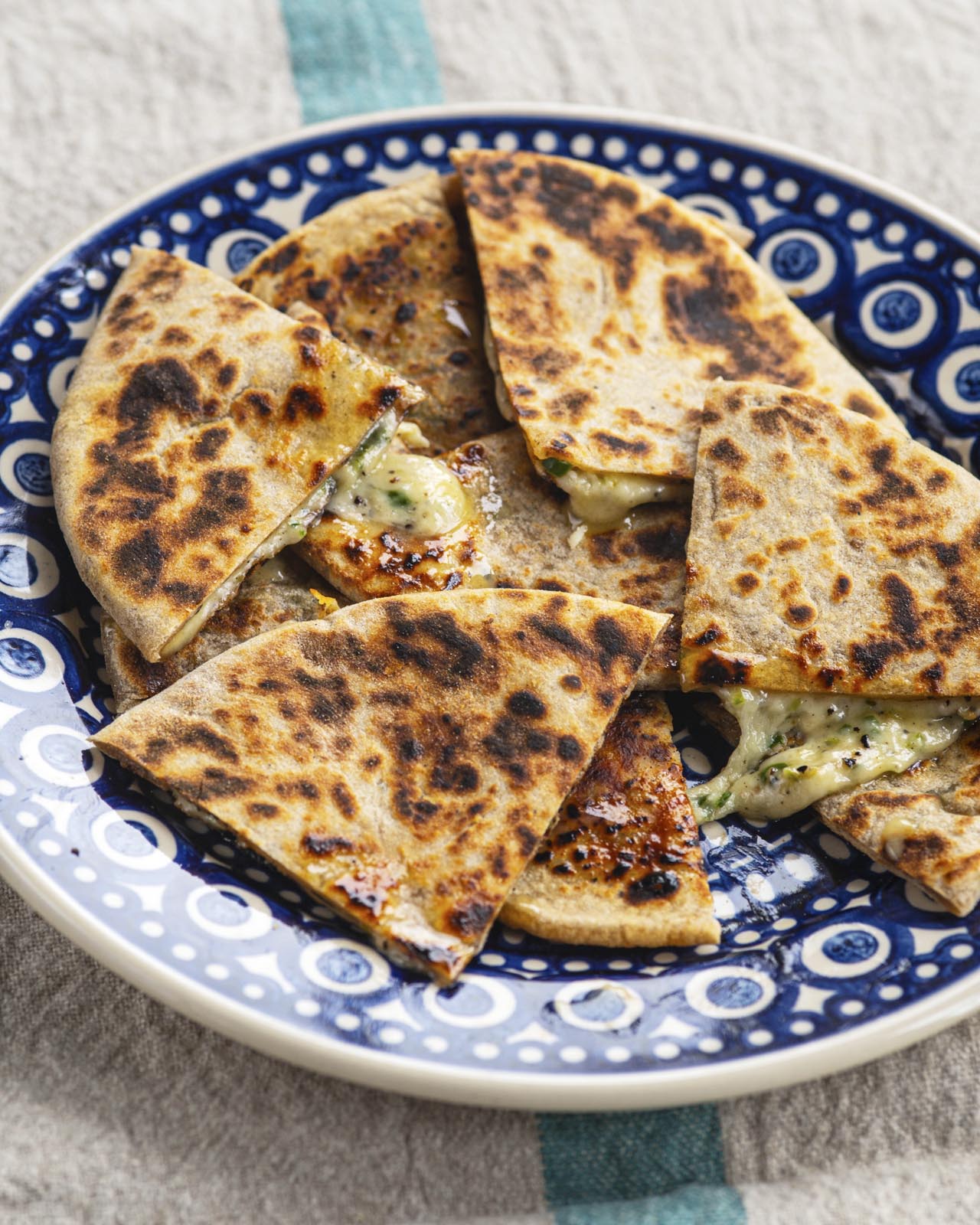 This quick and straightforward stuffed parotha recipe is from Urvashi Roe’s Biting Biting, a book full of delicious veggie and vegan Gujerati-style snacks and quick meals. The recipe hails from a friend’s mum, who Urvashi describes as a cooking legend. The dough and filling recipes are straightforward and quick, as is filling and rolling out ... Read more » 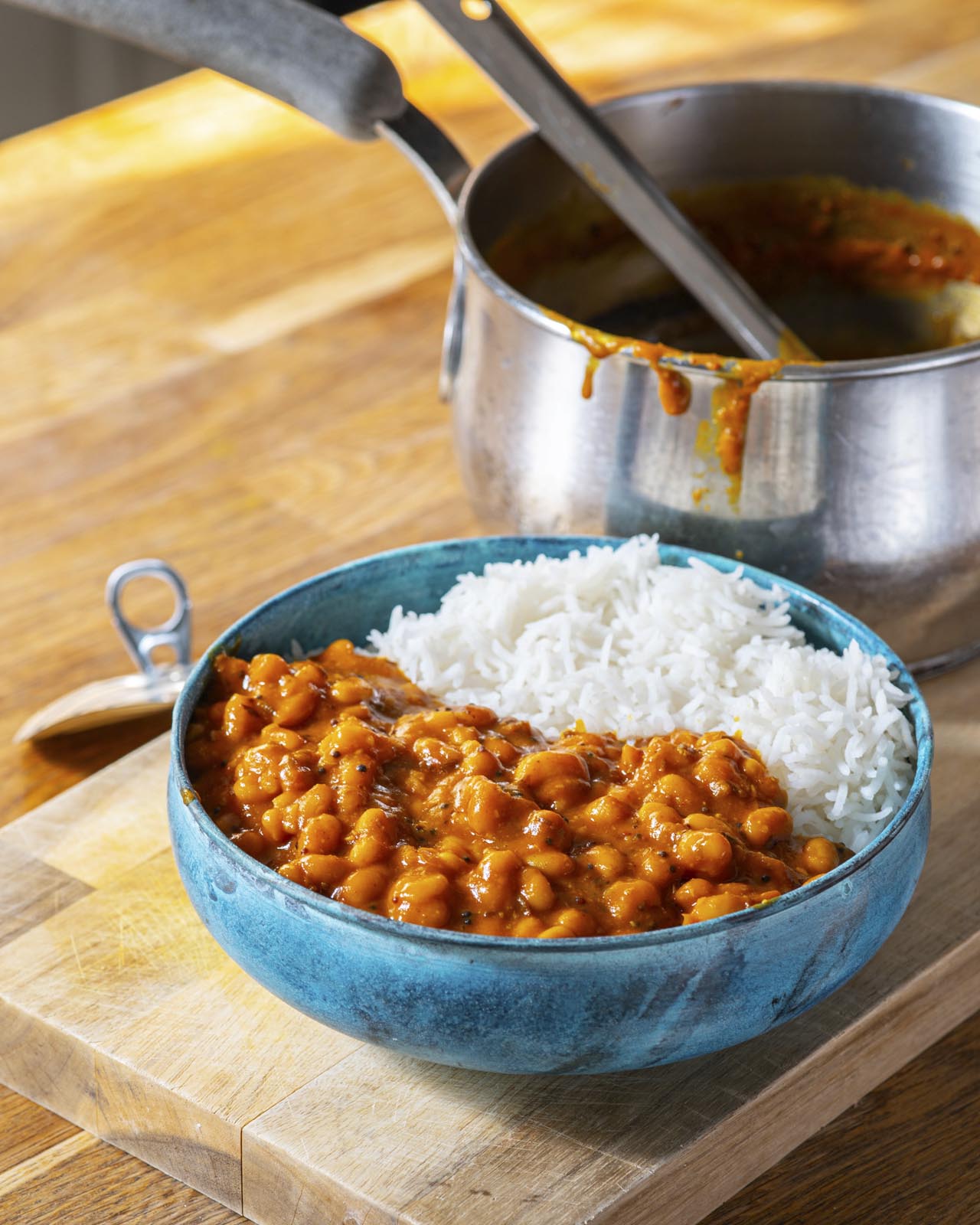 Baked Beans Shaak is a genius recipe from Urvashi Roe’s Biting Biting that turns a tin of cloyingly-sweet baked beans into a fabulously punchy, savoury curry that takes minutes to make. Enjoy the curry with rice, Indian breads or on a slice of toast. Check out our full review of Biting Biting by Urvashi Roe. ... Read more » 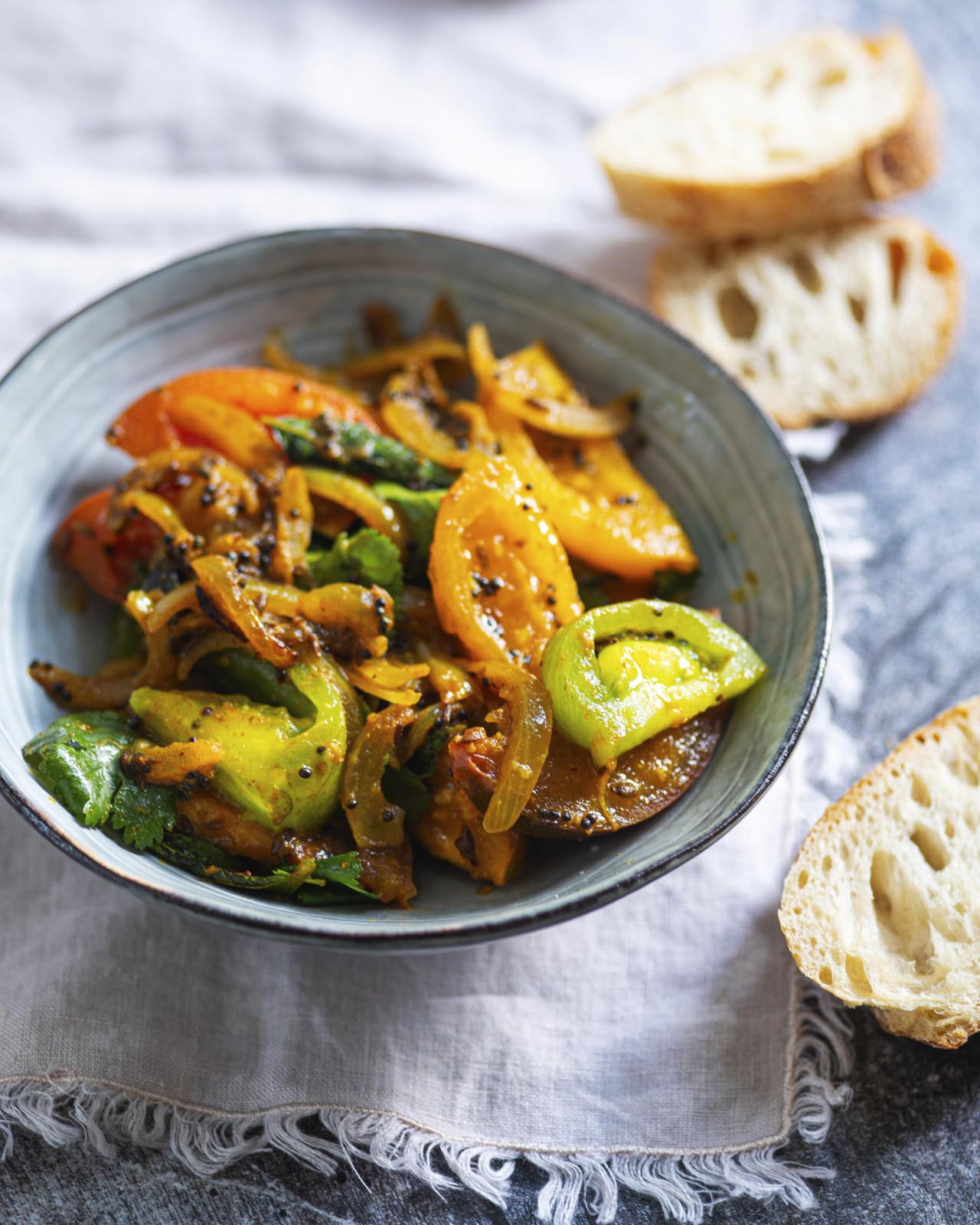 This Tomato and Onion Curry is not like other Indian curries I’ve made; I’m used to recipes where tomatoes are integral to the curry’s base, cooked down to melt into a rich, thick gravy redolent with onion, ginger and spices. But in this wonderfully quick and easy recipe from Urvashi Roe’s Biting Biting, the tomatoes ... Read more » 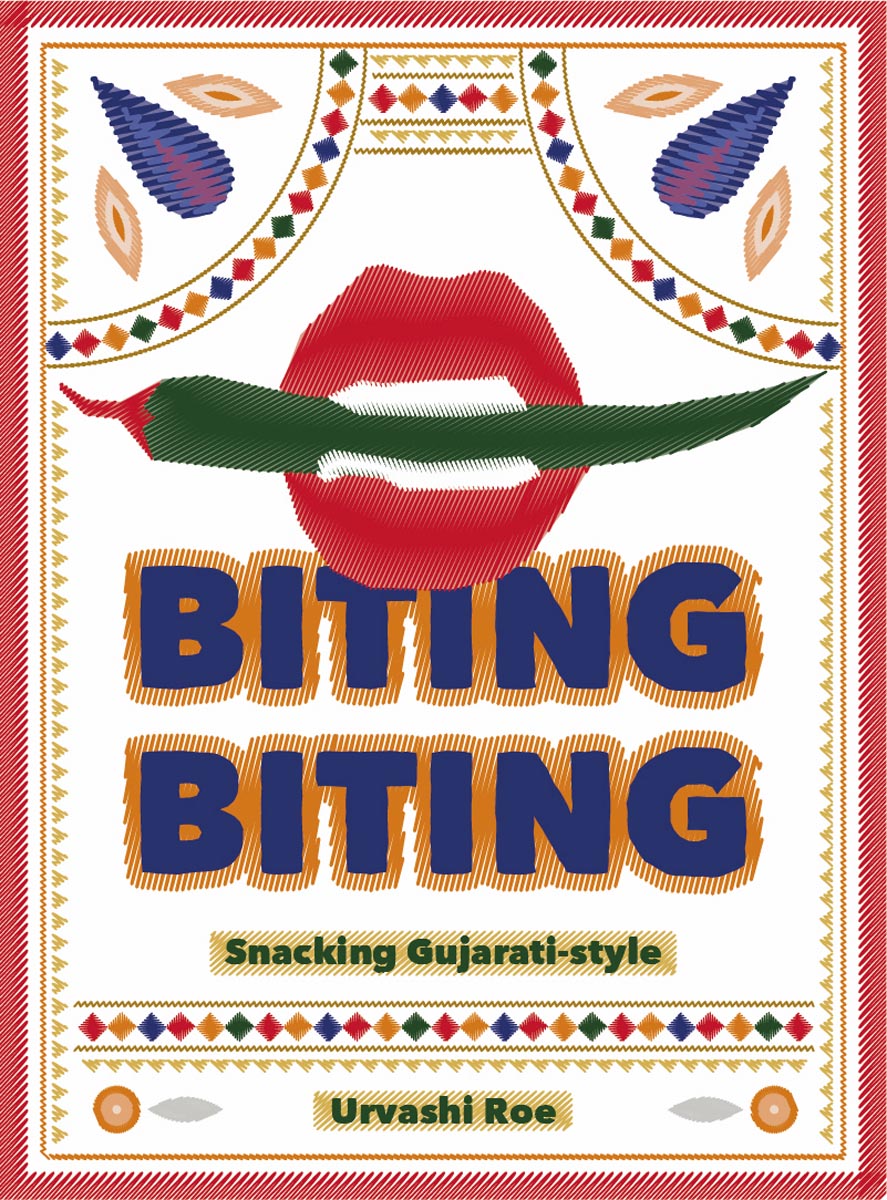 Biting Biting: Snacking Gujarati-Style is the cookbook Urvashi Roe was born to write. She’s written about food for several years at Botanical Kitchen, was a contestant on the Great British Bake Off 2011, hosted Gujarati cooking classes at Demuth’s Cookery School, and ran a successful cafe in Enfield Library for a few years before returning ... Read more » 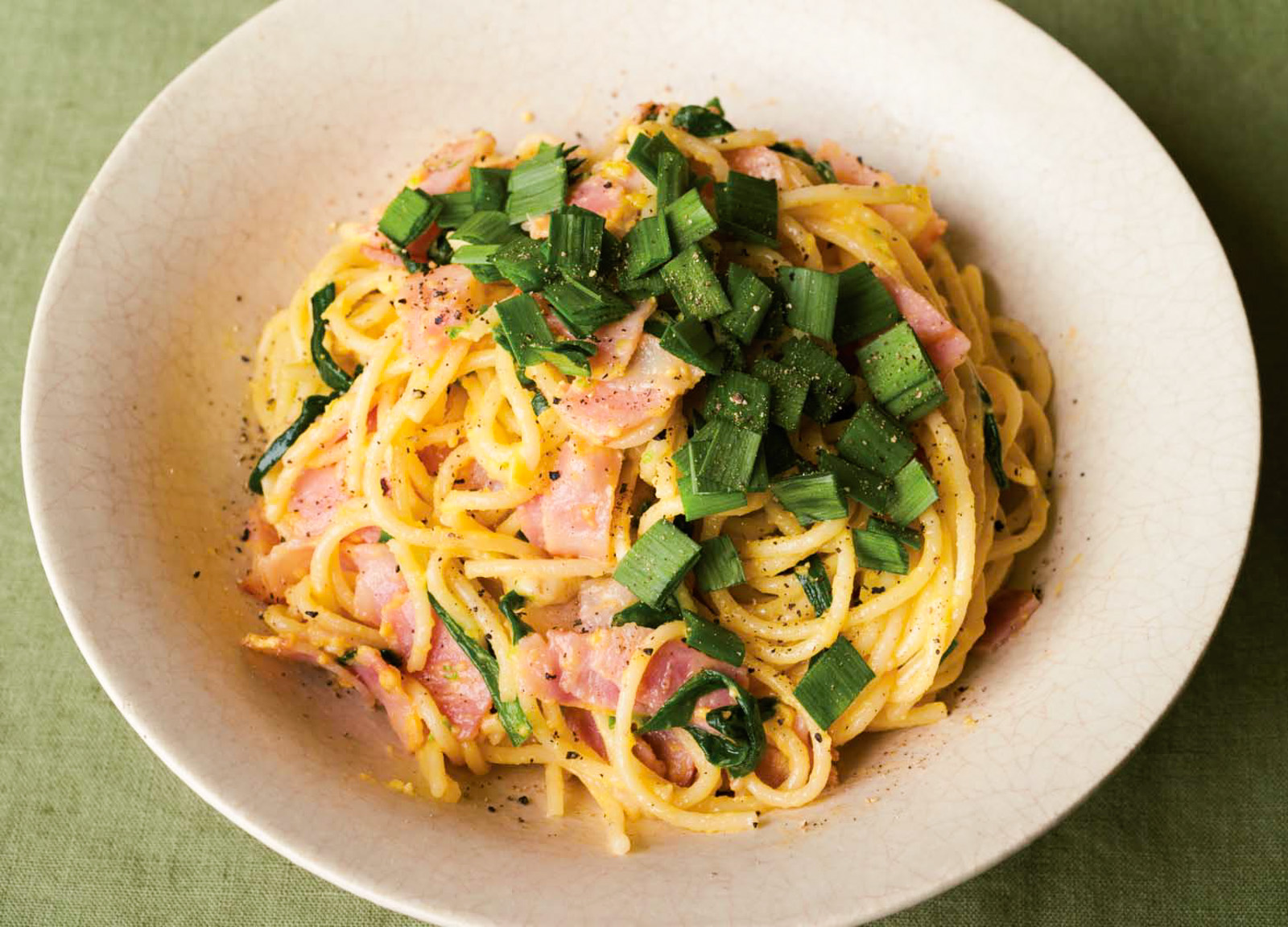 As in the UK, it’s common in Japan to incorporate ideas and ingredients from around the world into your home cooking. Masahiro Kasahara has based this simple pasta dish on niratama, a classic stir-fry of garlic chives and softly scrambled eggs. The combination of bacon and garlic chives creates a quick, simple and tasty meal. ... Read more » 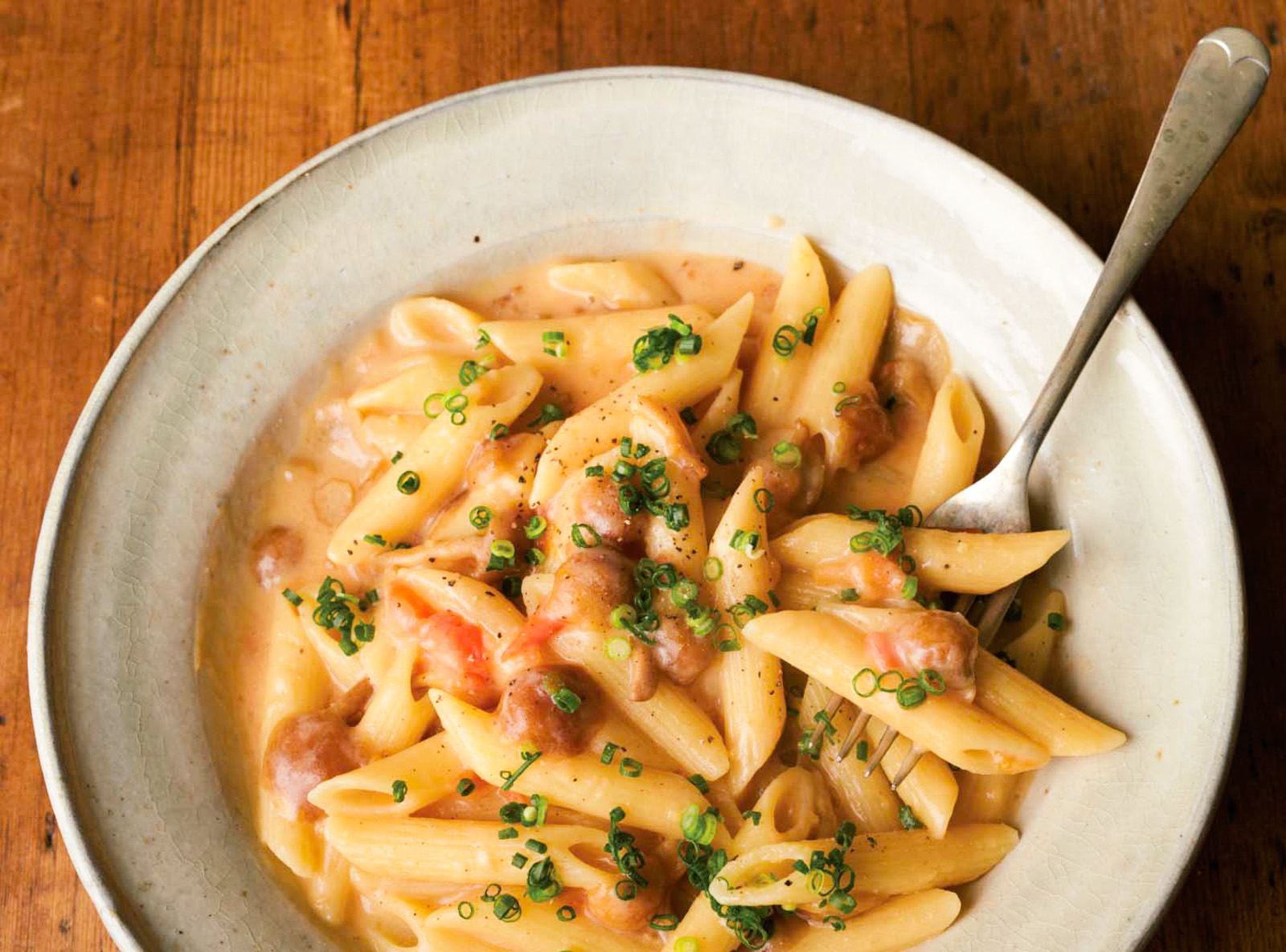 Tomatoes and mushrooms are naturally high in umami flavours, as is miso paste. The combination creates a deliciously savoury and simple pasta dish, perfect for quick meals. The recipe is from The Ultimate Japanese Noodles Cookbook by Masahiro Kasahara. You can switch the nameko mushrooms out for other varieties if you can’t find nameko. Tomatoes ... Read more »