It’s not often you arrive to a cookery class to an entire pig’s head laid out on the counter accompanied by a bowl of trotters, a liver and a bag of pig’s blood. But Catalan Pig Day is not your typical class. 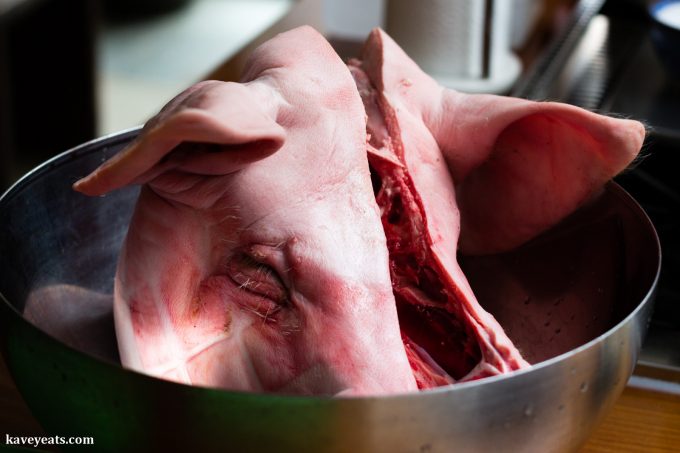 This unusual lesson is run by Rachel McCormack, an accidental expert in Catalan cuisine, and Anna Colquhoun, a teacher, food consultant and writer. Both Anna and Rachel like to share more with their students than recipes alone; Anna tells me she’s “as interested in the stories surrounding food as [she is] excited about cooking and eating it. Food is a fantastic route into understanding a place’s peoples, history, culture and politics.” 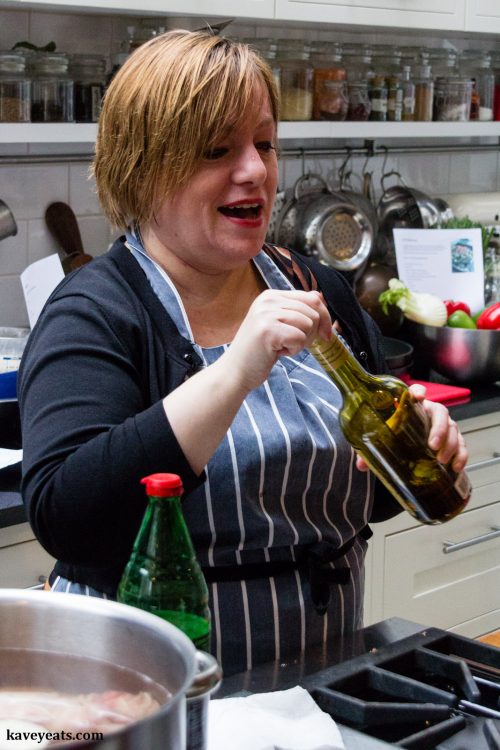 A ‘wee weegie’ (diminutive Glaswegian) as Rachel’s been known to describe herself, may not be the obvious figure to teach Spanish cooking, but Rachel lived in Spain for several years during which time she soaked up knowledge like a sponge. On arrival in Barcelona, she discovered that everyone was obsessed with food and politics, so she “decided to learn about the food as it was a lot easier than the politics!” The cooking fire lit, she talked the ears off friends, market traders, restaurateurs and anyone else who could expand her knowledge of Spanish and particularly Catalan cooking.

Back in the UK, she started teaching Catalan cooking when a chef friend invited Rachel to use her London café kitchen for classes on weekday evenings. Since then she’s given up her office job to focus on teaching fellow Brits about real Spanish food. Today, Rachel also shares her know-how on radio, a regular panellist on Radio 4’s The Kitchen Cabinet. Above all, she wants “people to know more about Spanish food beyond tapas and to make dishes for their friends and family to enjoy“. 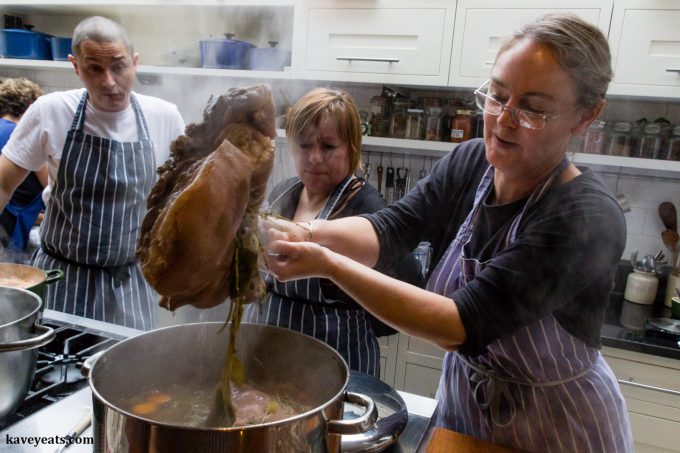 Like Rachel, Anna didn’t originally plan on a career in food. After working in international development for a decade, Anna made the decision to retrain as a chef and study food anthropology. After cooking and teaching with a number of organisations, she set up a small cooking school run out of her home in North London, where she also hosts regular Secret Kitchen supper clubs.

Anna offers a range of courses including baking bread, making pasta and preserving, favouring small class sizes and an informal style, where students cook together in companiable banter before taking a seat at the large dining table to enjoy a meal of what they have created. 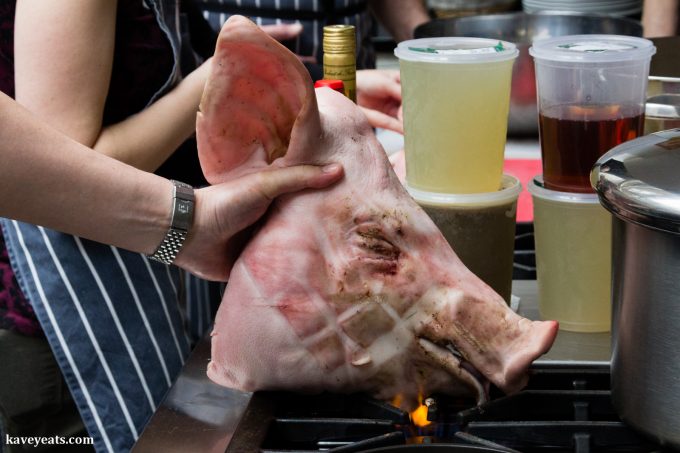 The menu for today’s class covers six recipes, the pig’s head cooked in a long and slow confit (the meat then pulled off the bone, chopped into chunks and served with vegetables and a little liquid from the cooking pot); a rich roasted rice casserole with boiled pig trotter meat stirred into it; fuet – cured pork sausages which we mix, stuff into skins and string up ready for hanging; morcilla – Spanish blood sausage where the filler is rice rather than bread or cereal grains; a Mallorcan fry of vegetables and pig’s liver and lastly filloas de sangre – crêpe-style pancakes with pig’s blood added to the batter. 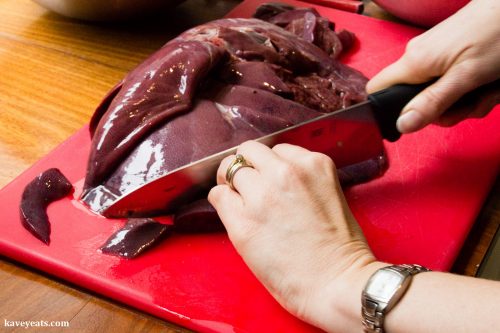 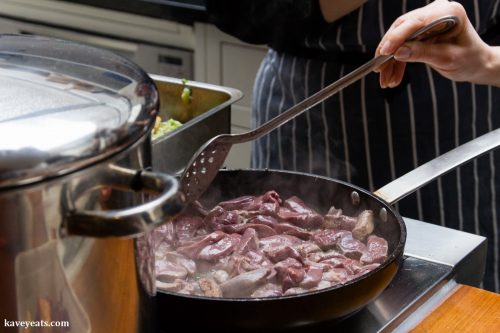 As you’d imagine, this isn’t a course that the squeamish tend to sign up for, but there is no pressure on everyone to try absolutely everything – as each dish is a collaborative effort, no one is pushed beyond their comfort zone. With tricky tasks – such as feeding sausage mix into skins without either bursting the skin or leaving air pockets – all of us have the opportunity to be hands on. 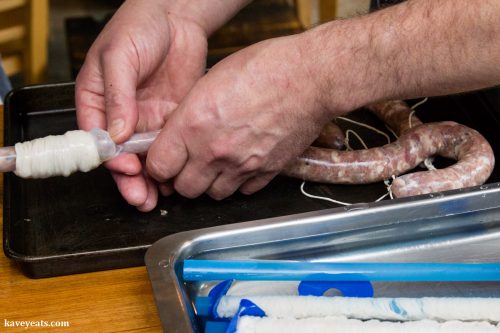 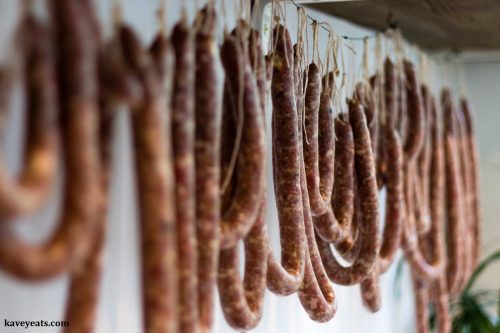 Rachel recognises that people attend classes not only to learn but to ‘have a good time and enjoy themselves’ and she’s not expecting most of us to start cooking pig’s head at home. A core principle of the day is the recognition that ‘when we eat meat we are eating a thing that was living’, and we should therefore use it well. She hopes we also gain an insight into Catalan cuisine. What about it inspires her so much? She explains, “it has such a strong culinary culture that is so tied to the land and its history; you can see both the landscape and the history in almost any dish you eat.” 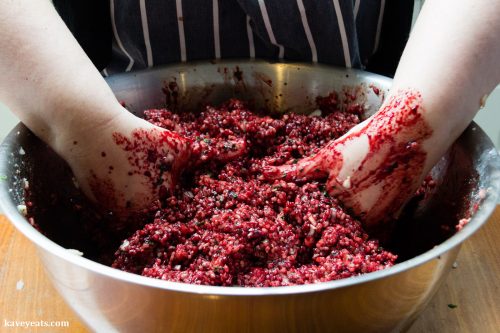 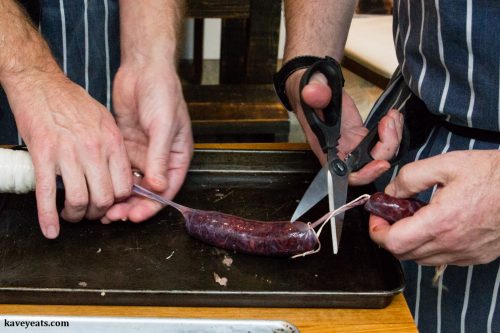 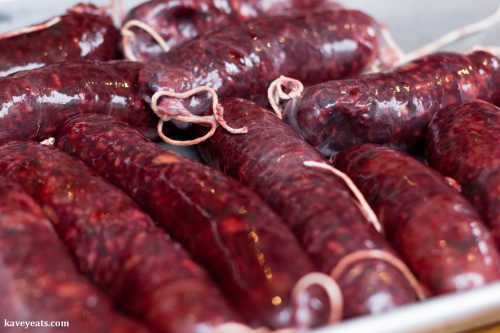 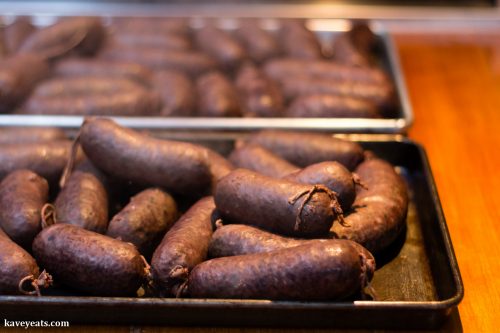 Anna agrees, keen for students to have fun, find the food delicious and be inspired about cooking at home; whether they take away whole recipes, a ‘nifty way to dice an onion’ or, as in my case, the confidence to stuff a sausage. 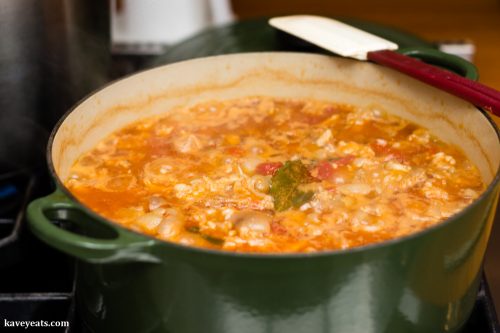 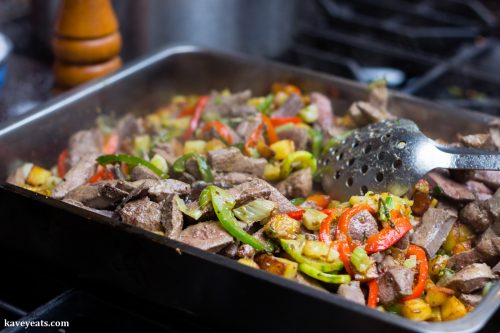 Kavey Eats attended this class as a guest of Catalan Cooking and Culinary Anthropoligist.