Looking for dinner as close to Waterloo station as possible, Canteen at Royal Festival Hall popped into mind. This self-declared “casual all day dining” establishment offers simple, classic British cuisine in a modern, informal setting – just what we needed.

Having reserved a booth, I was surprised at how tight these are for anyone but the skinniest of skinny minnies. Larger booths were reserved for groups of 5 or 6 minimum. We’d have switched to a regular table if these came with chairs rather than stools – perching on a stool for anything more than a very quick drink or bite is a pet hate of mine. So we remained wedged into our booth banquettes.

The lads ordered pints of one of the beers on draft, I forget which. They took an age being served, but went down well. 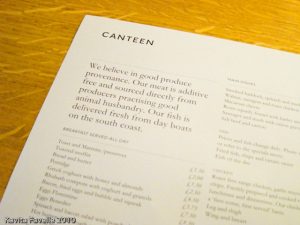 The menu is divided into Breakfast And All Day, Starters/ Small Dishes, Main Dishes, Sides and Desserts and is full of comforting classics such as sausage and roast onion sandwich (£ 5.75), fish finger sandwich (£ 5.75), spinach and Lancashire cheese tart (£ 6.75), macaroni cheese (£ 8.50), daily pies, roasts and stews (priced individually on the daily specials menu) and steak and chips (£16.75). 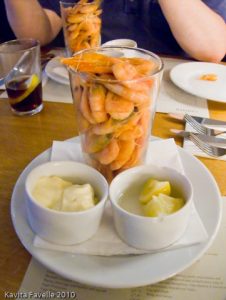 Two of us each ordered a pint of prawns with mayonnaise (£ 7.00). I really enjoyed these – fresh, sweet and succulent and wonderful with the mayonnaise. Every one in my pint glass had a generous volume of vivid orange roe slung beneath, which I greedily slurped before shelling and popping the prawns themselves. My friend would have appreciated the option of a half pint serving but I happily devoured my way through a whole pint without spoiling my appetite for the next course! 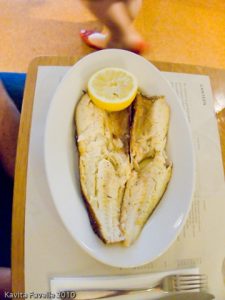 Pete ordered the hot buttered Arbroath smokie (£ 8.50). This is something he’d never have chosen only a few months ago, so the resolution to eat more fish is holding, thanks in no small part to the Billingsgate course we attended several weeks ago. The serving was generous, enough for a main course, with the addition of a side or two. And delicious! 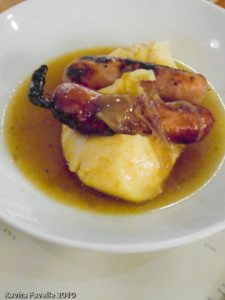 For his main, Pete chose sausages and mash with onion gravy (£ 9.50), a perfectly decent dish, though I wouldn’t rate it as excellent. 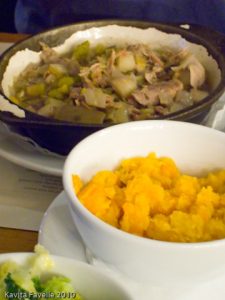 Our friend had one of the daily specials, a stew with duck and pearl barley. It wasn’t the most appetising dish to look at (even as stews go) and it wasn’t to my taste either, but he seemed happy enough with it. 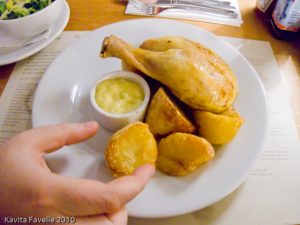 I chose roast free range chicken, garlic mayonnaise and chips (£ 9.50 for leg and thigh, £ 12.50 for wing and breast). I asked to swap the chips for duck fat roasted potatoes and our waitress kindly brought out some gravy, on request. In retrospect, I should probably have stuck to the chips – the roasties were OK but had become a little tough, perhaps sitting under a heat lamp for too long after coming out of the oven? As for the meat, it was only OK – the skin was flaccid rather than crisp and the meat wasn’t as tender as I’d hoped, or as flavoursome. 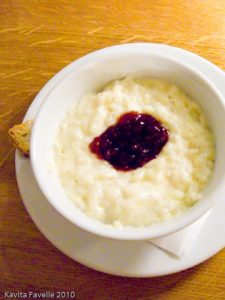 For dessert I chose the rice pudding with jam (£ 5.25). Hot, thick, rich, creamy – this pudding took me on a saunter straight down memory lane. Particularly nice was that the rice pudding itself was not too sweet, with the rich raspberry jam providing most of the sugar hit. It was served with a crunchy biscotti, which gave a nice texture contrast, though I could have done with a second one, ideally! Very nice indeed. 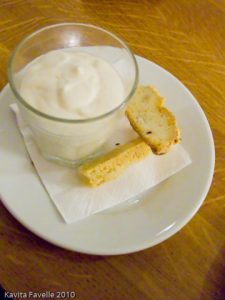 Both the lads chose cider brandy syllabub (£ 5.75) and enjoyed it immensely. Soft, pillowy smoothness with a decent cider brandy hit and good with the buttery biscuits that came alongside.

Service was genuinely friendly and helpful, though it often proved difficult to get a staff member’s attention when we wanted it. It didn’t help that one or two staff were so rigid about which tables were and weren’t theirs that they did a sterling job of avoiding eye contact and gestures. But our main waitress was all smiles, happy to answer menu questions, give advice on choices and deal with any minor issues. For example, I wasn’t too keen on coffees being served significantly before desserts but a (polite) explanation and request saw mine taken back and a fresh one brought out to me after my dessert had been eaten; the boys decide to hang on to theirs when they came.

So, can Canteen deliver or can’t it?

On this showing, and a previous brunch visit, I’d say it can, so long as your expectations are realistic. This isn’t the place to visit if you’re looking for break-the-mould innovation or a truly sublime eating experience. What it does, and does very well, is deliver simple familiar comfort food competently executed, reasonably priced and delivered with a (slightly rushed but genuine) smile.

Addendum: a couple of weeks after this visit, I went again. The smoked mackerel and potato salad ( £7.50) was decent, as was the pint of prawns I had again. My friend and I also shared a macaroni cheese (£8.50) and a fish finger sandwich (£5.75), both of which we enjoyed. It took a while to get a table, longer than we’d been told when we arrived, but once seated, service was good.

Addendum: sadly, I had a really poor experience during a visit in early 2011. Wrong drinks and dishes served, a very long wait for them to be corrected, despite being nearly empty, items on the plate being very stale and generally poor service. We did have some items removed from the bill (though not service, until we requested).

I can no longer recommend Canteen, based on my last visit.

Please leave a comment - I love hearing from you!9 Comments to "Can Canteen Deliver?"