When I read, in Richard Vines’ food news round up, that Raymond Blanc was opening a branch of his Brasserie Blanc chain in London, and that there was a 50% soft opening discount being offered, I thought it would be a good chance to reassess the chain after my previous visit to the Bristol branch.

I was joined by my husband, Pete, fellow food blogger, The Ginger Gourmand, my food loving friend, Foxie and a London-based twitterer, Sue, who’d seen my tweets about booking a table and expressed interest.

The first challenge each of us faced was finding the restaurant – its address is 60 Threadneedle Street, in the heart of the city. But when one arrives at number 60, one is faced with a huge, modern office building with no restaurant in sight. In fact, the entrance is tucked down a side street at the side of the block; not very obvious at all. I wonder how long it will take before the staff at the building’s main reception get sick of giving directions and insist on a sign being erected! 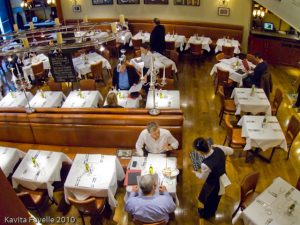 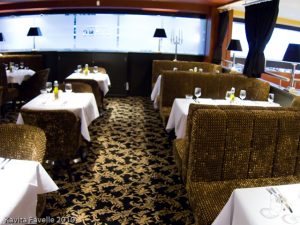 So, given it’s location in such a modern glass and steel building, how is the restaurant styled? Unlike the Bristol location in a former Georgian Quaker meeting house, this is not a beautiful historical building in which the designers could get creative whilst incorporating both a touch of traditional bistro comfort and a dose of steel and shine. The design team clearly aimed for a similar blend of modern and traditional, and certainly they created a comfortable and attractive space, but not one that works as well as the Bristol space. The main floor has a pleasant, open feel, due to the very high ceilings. We were seated in the cosier mezzanine floor, which overlooks the main dining area. There is also a bar area on the ground floor.

Once we were all assembled, one of the waiting team looking after us handed out menus and we were quickly absorbed in the choosing process.

Whilst ordering, my evidently pregnant friend politely asked the waiter if it would be possible to have the cod and mussels main dish without the mussels, because of her pregnancy. She quickly added that should this be difficult, she would be happy to choose something else. The waiter assured her that this would absolutely not be a problem and, orders placed, we relaxed in our booth until the starters arrived. 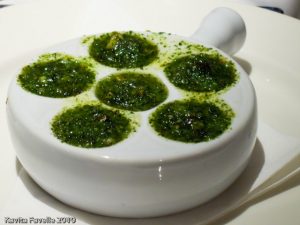 Foxie expressed surprise that the Burgundian snails in garlic herb butter were so herby – when she’s had snails in France, they’ve been more about the garlicky oil and less about the parsley, though I’ve had them in France served in very much this way, so perhaps it’s a regional variation? She judged the dish good but not remarkable, and the snails well cooked, rather than rubbery. 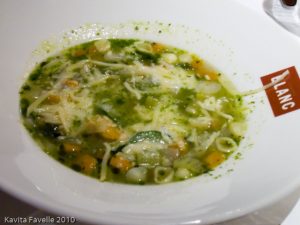 Pete’s basil and parmesan soup was laden with the wonders of a spring garden, light and well flavoured with generous chunks of vegetables and pasta shapes. 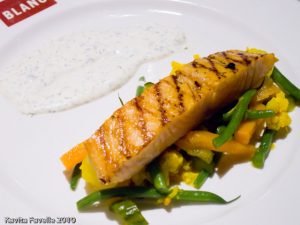 Unfortunately, the entire centre of the hot oak smoked Loch Duart salmon with vegetable piccalilli was raw and un-smoked, and therefore inedible. The parts which were cooked were pronounced good. The pickles were nice – not too acidic but sharp enough to balance the richness of the salmon. 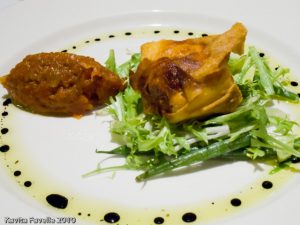 The crispy goat’s cheese parcel with tomato chutney was pleasant. A case of “what it says on the tin” rather than anything particularly special, but that’s probably what one’s looking for from a brasserie. 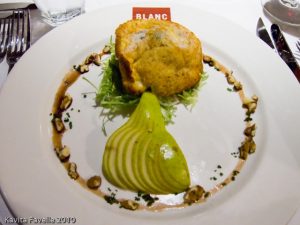 My bleu des Causses cheese soufflé with pear and walnut was probably the best starter, I think. Turned out of the dish it was cooked in, the presentation of a somewhat collapsed pile of soufflé wasn’t the most attractive, but the crispy exterior and soft interior textures and the gentle blue cheese flavour made up for that. The pear and walnuts were a simple, classic accompaniment.

I don’t have a photo of the cod fillet, samphire, mussel and saffron sauce minus the mussels. Because, despite our waiter’s assurance that this request absolutely wouldn’t be a problem, when the mains were served (by a different member of staff) the dish came with mussels. By the time a replacement dish arrived, the rest of us were at least half way into our main dishes – if we’d waited they’d have been stone cold!

The cod was well cooked, but under seasoned. The saffron sauce was gritty and tasted earthy (and not in a good way). Especially after the mix up and wait, the dish was very disappointing. 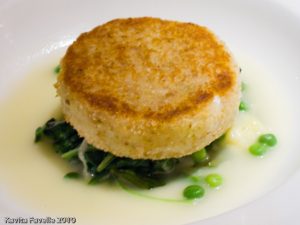 Raymond’s smoked haddock, leek and Gruyère fish cake was deemed “quite nice”. It was a generous patty with a reasonable fish to potato ratio and a nice flavour. Pete would probably have been more positive about it had he not found a large, sharp fish bone in it! 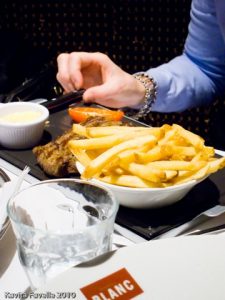 The steak and chips were decent, nothing earth shattering. 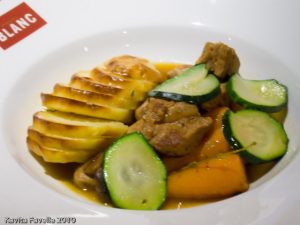 The slow cooked veal, castle potatoes was tender, with nice flavours and a simple selection of vegetables.

N.B. I found the English translation of pommes château a bit forced, I think it would have made more sense to leave it in the original French, myself. 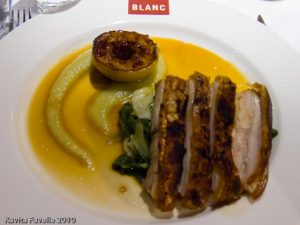 I ordered a pork belly special that came with apple and cabbage. Whilst the pork meat was ok, and fairly tender, the crackling was oddly blackened just on the surface, as though it’d been blowtorched just before serving – the burnt bits did not taste good! The cabbage, apple and gravy were all tasty.

Only three of us had space for dessert! 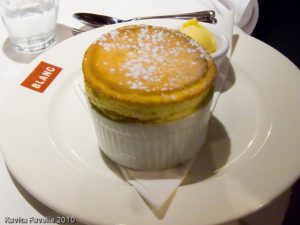 The passion fruit soufflé had risen nicely, and was described as gorgeous! Light, airy, not soggy and with a nice flavour. It came with an ice-cream, also passion fruit, I think, which was also good. 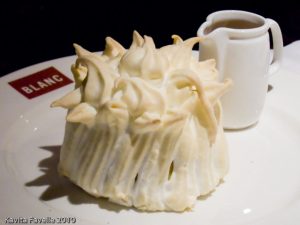 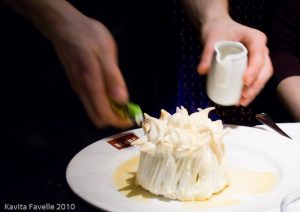 The flaming baked Alaska (for 2) was quite a show. Alcohol was poured over and lit at the table before we waited for the flames to die out and tucked in. A historical classic well worth reviving!

So, what’s the low down? Service was friendly but variable in efficiency – it didn’t help that, despite the restaurant being so quiet, our table of five was shared by two members of staff who didn’t seem to communicate much. I’d put some of this down to teething problems – it was a soft opening after all – but our waiter did mention that he’d been transferred from another branch of the chain so there was some experience of the operation and menu. As you can see from the review above, the food varied from poor through acceptable to a few pretty good dishes but in the most part it was rather ordinary, even a little mundane.

I have to remind myself that much of the clientele will be men in suits from nearby offices, men in suits more interested in the business talk at the table than what they are eating. In such an environment, surprising though it might be for central London, the food really doesn’t have to be fabulous for the restaurant to succeed. But I can’t see it becoming a destination for food lovers any time soon.

Please leave a comment - I love hearing from you!8 Comments to "Blankety Blanc: Raymond Fails To Fill In The Blanks"