Blacklock City is the perfect date night restaurant for steak lovers. OK, fine, it’s pretty great for eating out with friends and workmates too; as long as everyone is a fan of red meat, everything’s shiny! But my visit was a date night with Mr Pete Drinks. And it was lovely.

Two years after the original Blacklock Soho opened in a former basement brothel, we now have a sister restaurant in the heart of the City. Just like it’s older sibling, Blacklock City is located in a basement; the ground floor entrance gives immediate access to stairs down into the restaurant. Note that, like the original, there is no lift so it’s not wheelchair accessible. That said if you can manage stairs with assistance, just ask – I phoned on my arrival to the entrance and a helpful member of staff raced up to carry my bulky laptop bag down and offer support if needed as I made my slow descent. 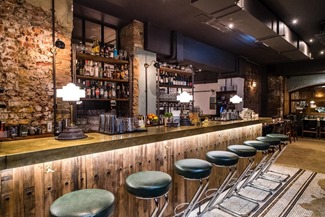 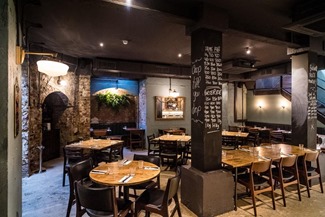 Images of interior courtesy of restaurant

The space has much in common with Blacklock Soho – the basement brick walls have been left exposed and the high ceilings are painted in dark grey, yet the space doesn’t feel at all dark or claustrophobic. Seating is (to my mind) better – less of the large sharing tables and high tables with stools (both pet hates) and more regular 2-4 person tables and chairs, some with a leather banquette to one side. There’s a bar with row of padded stools where a handful of salary men firmly install themselves for the duration of our visit.

The menu is much the same, with a few new extras. Like Blacklock Soho, Blacklock City offers skinny chops and larger cuts, with blackboards used to list available weights for the various cuts. The bargainous ‘All In’ skinny chop set price deal (which I reviewed previously) is the same – £20 per person for 2 people or more covers 3 ‘pre chop bites’ each, a plate of mixed skinny chops (4 per person). one side dish per person and a generous portion of dessert.

The new menu has added a couple of starters and an extra dessert but in the main part, offers what has already proven popular at the original. As I reviewed the skinny chop extravaganza last time, we focused on the new starters before moving on to mains. 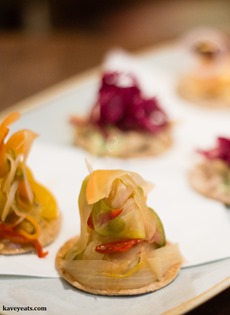 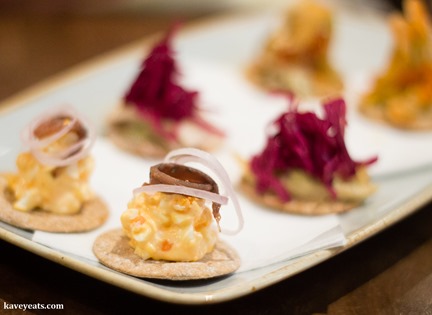 Pre chop bites are still £3 for a plate of 3. If you’re waiting for a late arrival, or are just really hungry, order some to enjoy while you read the menu.

The three little crackers are currently topped with cheese and pickle, chicken and horseradish and egg and anchovy. 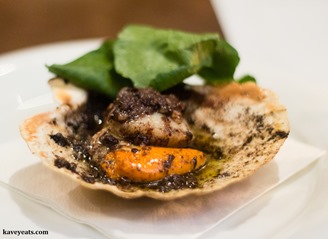 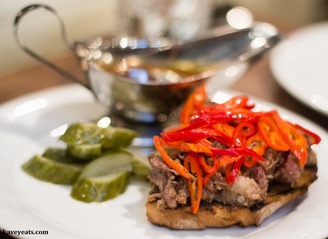 Blacklock Soho has no starters beyond those (gorgeous) little bites but Blacklock City has three to choose from.

We tried the coal roast scallops and black pudding (£5), which proved to be just one generous scallop, (still with the roe attached, I’m happy to say). It was good, no doubt, but the black pudding was broken up and oddly difficult to scrape off out of the scallop shell. I liked the flavour combination but the format didn’t quite work for me…

The clear winner was pig’s head on toast with gravy (£5), a generous serving of fatty meat from the pig’s head, beautifully soft and meaty, piled onto a charred slice of toast and topped (rather incongruously we thought) with sliced red chilli. The pickles on the side worked far better than the chilli to cut through the oiliness of the meat. Star of the show was the gravy, one of the best I’ve tasted, we could both have happily drunk it straight from the jug. 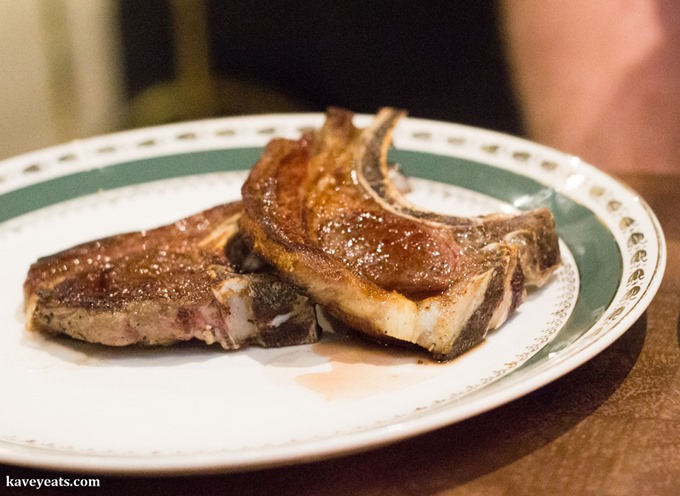 Although I’d planned to order from the larger cuts listed on the boards, most were simply too large for our appetite, especially since I was already settled on having three sides between us.

Two lamb cutlets from the Skinny Chops list (£4 each) fit the bill and were generously sized, perfectly cooked and with a really fabulous lamb flavour. I loved these! 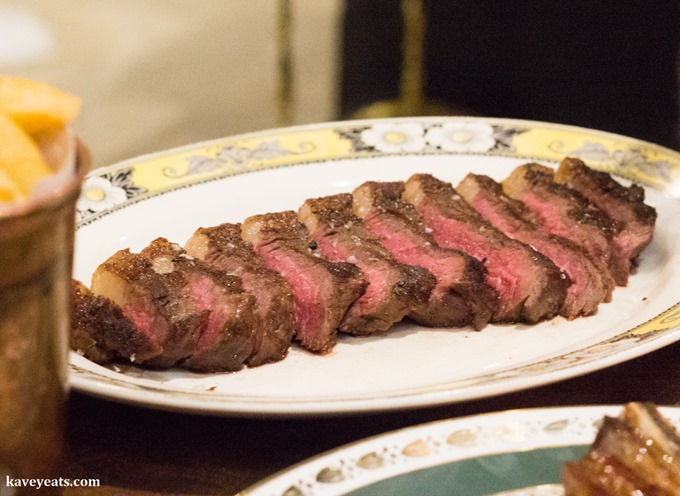 We also shared this off the bone rump cap (£15) which was a beautiful piece of beef, cooked well and served simply. Very good; even when we were starting to get full, we couldn’t leave a single slice uneaten!

With it (and the lamb) we had two sauces, both of which were perfect; a gravy jug of thick, perfect béarnaise (£2) was superb with the beef and the little pot of green sauce (£2) cut beautifully through the lamb fat, and worked nicely with the beef too. 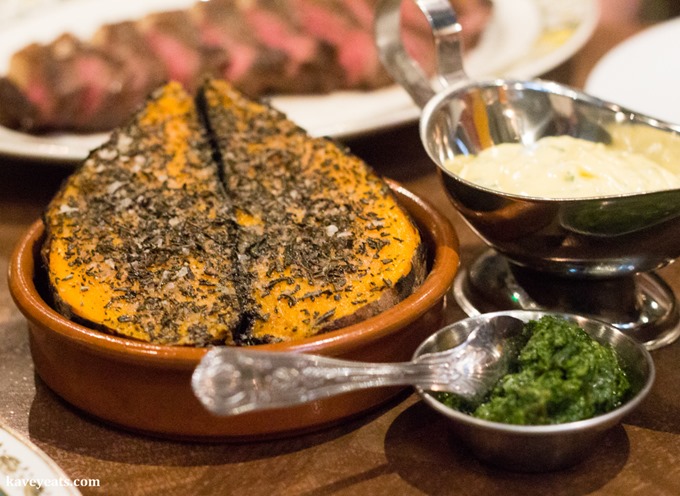 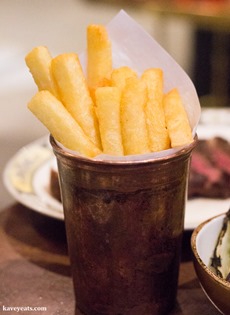 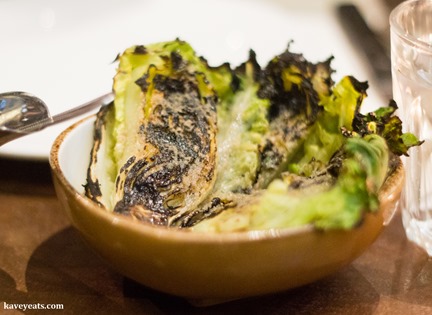 Pete loved the 10 hour ash roasted sweet potato (£4) as much as I did on my first tasting, it’s fantastically good, soft and deeply flavoured and fabulously comforting. Beef dripping chips (£4) were just as one would expect, crisp and fluffy and delicious. I loved the charred smokiness of the barbecued baby gems with anchovy dripping (£4) and that lovely combination of wilted areas against crunchy ones. 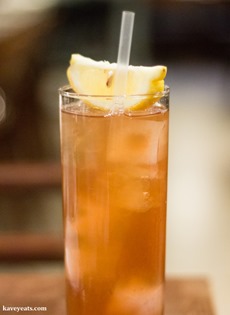 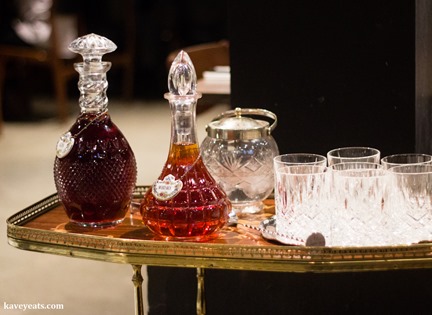 Drinks are rather a great deal at Blacklock, not least the short list of cocktails for a fiver. Yes, a fiver! I had a refreshing glass of grandma’s spiked lemonade (£5, madeira, sloe gin, lemon, earl grey) while Pete stuck to a couple of bottled beers, both from Siren brewery, and also £5 each.

We didn’t get round to ordering from the wonderfully retro negroni cocktail trolley, negronis to your specification are also £5 each. 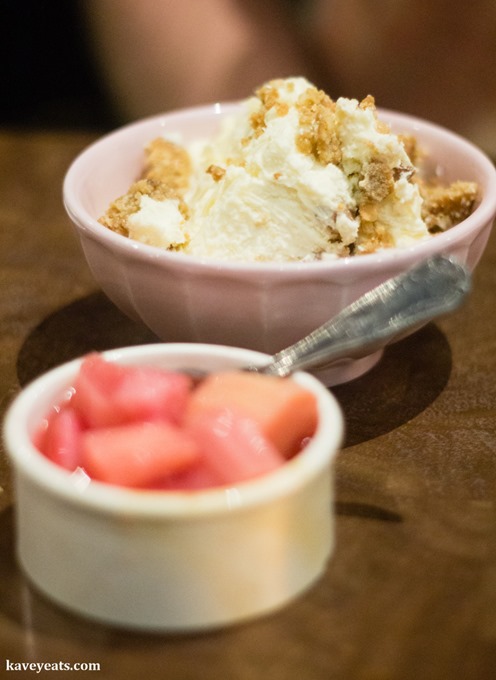 I was happy to see that the signature dessert at Blacklock Soho is available here too, along with a second choice of bread and butter pudding (both £5). And it’s served the same way – our waitress arrived with a huge family-style dish of white chocolate cheesecake and dolloped spoonfuls into the bowl on the table – it was a game of chicken, she kept serving until we said stop though I presume if we’d allowed the bowl to reach Tower of Pisa proportions, she’d have blinked first! The menu describes it as being served with ‘seasonal berries’ so I was surprised that what came out was rhubarb, seasonal sure but definitely not berries.

Not only are food and service both excellent here, what I also like is the very reasonable pricing, especially on the cocktails, starters, sides and dessert. This makes it easy to enjoy a fabulous feast for £30-40 a head, pretty reasonable for London these days.

Please leave a comment - I love hearing from you!31 Comments to "Blacklock City | All The Meat II"