We received a review copy of this book from Kitchen Press.

Biting Biting: Snacking Gujarati-Style is the cookbook Urvashi Roe was born to write. She’s written about food for several years at Botanical Kitchen, was a contestant on the Great British Bake Off 2011, hosted Gujarati cooking classes at Demuth’s Cookery School, and ran a successful cafe in Enfield Library for a few years before returning to the world of corporate marketing. 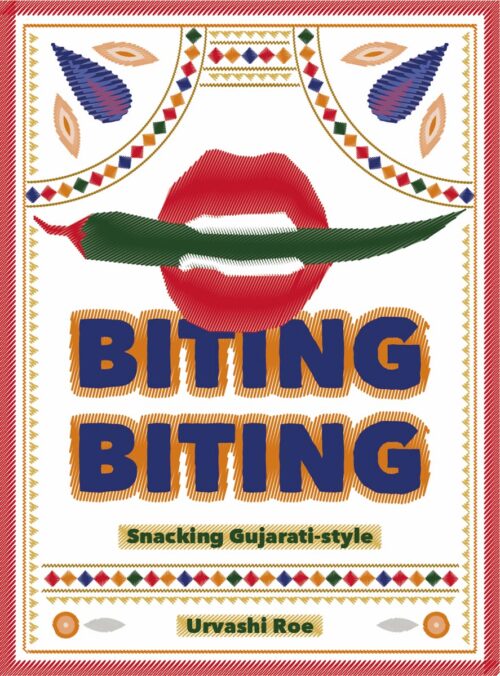 Urvashi and I first met in person during a press trip to Cornwall ten years ago and have been good friends ever since, along with our respective husbands and her two fabulous girls. As well as our love of food and travel, we share an obsession with Japan, its culture, and its food. Read more about that in my interview with Urvashi from eight years ago.

Urvashi was born in Dodoma, Tanzania to parents whose families emigrated there from Gujarat, India in the 1930s and ’40s. Urvashi tells their stories to lead into her own at the start of Biting Biting, explaining that the family enjoyed a good life in Tanzania, with extended family always around to care for younger members. In 1972, when she was still a toddler, her family moved back to India – a reaction to the political unrest taking hold in Kenya, Tanzania and Zambia following Idi Amin’s military coup in Uganda the previous year. A few short years later, Urvashi remembers flying to England with her parents and two sisters, moving in with a family member in Tooting, before renting their own home in Southall, and soon after, Hanwell. The family made friends quickly, via work and the local community – a melting pot of immigrants from the Punjab, Sri Lanka, the Caribbean – and food was one of the languages of these new friendships. Eventually, her parents were able to buy their own home in Perivale, where they moved as Urvashi started secondary school, an area close to relatives in nearby Wembley. Memories here involve lots of food making, from papads dried in the sunny garden to Diwali preparation of fafra, sev and chevro, to hot rotli with jaggery as a popular snack. There were always friends and family around, a bustle Urvashi missed when she moved away to university. There, she learned to make food other than Indian, from British and Italian uni mates. As part of her degree, she spent a year in Germany and one in France, both further opening her culinary eyes. After a chance suggestion from an Uncle to come to Japan (where he worked), she signed up to a TESOL course (on Teaching English to Speakers of Other Languages) before heading to Japan in 1993, where she stayed for around 3 years. Slowly but surely she came to know and love Japanese cuisine, and still does to this day. It was during her TESOL course that Urvashi met her beloved Tone, who headed out to Japan a few months later (after his original placement in Italy fell through) and he quickly became her partner in food, life and travel. They got married in 1997 and, along with their two girls Amber and Amy, have forged a wonderful life. Gujarati food is very much part of what Urvashi describes as the “cultural mishmash” the family eat at home, which also incorporates a wide range of food from Britain and around the world. They travel regularly as a family, with food often a key focus of their trips (as it is for me and Pete). 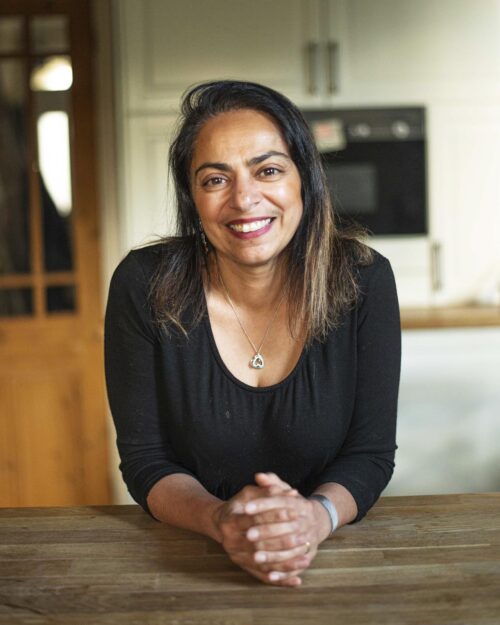 Now on to the premise of the book: Urvashi explains that in Gujarati (and indeed wider Indian) culture, it’s customary to offer refreshments when someone visits your home, not to mention that you take and gift food when you visit others in their homes. Although you might serve visitors a full-scale meal, most often it’s katak batak, slang for small bites, snacks, a little something something. In her family, they have translated katak batak to biting biting, hence the name of the book.

Not all the recipes in the book are dishes you might classify as snacks, there are also simple shaak (curries) that are great choices for quick, snacky meals as well as ideas for turning leftovers into another delicious treat. There are sweet bites and drinks too. All the recipes are vegetarian or vegan, and the majority are broadly Gujarati, with a few fun fusion dishes that are family favourites.

Before launching into the recipes, Urvashi shares the contents of her masala dablo (spice tin) as well as her recommended store cupboard staples, a note on what she tends to keep in the fridge, and the items she has to hand in the freezer.

The recipe chapters are Beer Snacks, Bhajia (deep-fried snacks), Farsan (salty snacks), Shaak (curries), Rice, Breads, Chutneys & Pickles, Sweet Biting, and Drinks. At the back, a humourous section on how to cope if mum (or any other visitor) is on the way and arriving in 15, 30 or 45-60 minutes. Last, there’s a detailed Index that includes both ingredients and the names of dishes.

Time to talk about the visuals, and they are a real delight. The design of that vivid, in-your-face cover is echoed for each new chapter with occasional illustrations popping up on some of the other pages. There are photos from Urvashi’s family albums, of her as a child with her parents and extended family, and of her, Tone and the girls throughout the years. These are supplemented by some truly wonderful portraits by food photographer Matt Inwood (a very talented photographer who I also consider a friend); many are candid in nature, capturing genuine moments of love and laughter, and enjoyment of food. And of course, his beautiful photographs of the food bring the recipes to life. My only disappointment is that there aren’t photos against all the recipes, especially when the photography is this good!

Every recipe introduction shares a personal story or anecdote, or an interesting tidbit about the origins of the dish, a tradition it’s associated with, or a note about one or more ingredients. The more of the book you read, the more you are drawn into Urvashi’s personal space – a domain that’s warm, inviting and above all hospitable. 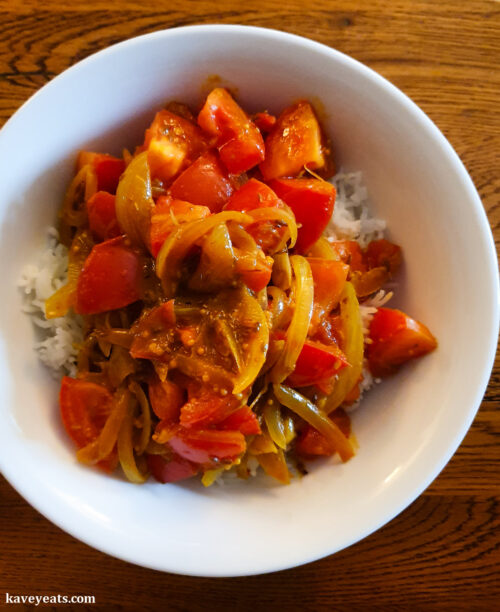 The first recipe we make is a quick and simple Tomato and Onion Curry, and we love it! I’m more familiar with using tomatoes as part of a curry sauce base, where they’re cooked down to melt into a rich, thick gravy, but here the tomatoes remain fresh and relatively intact, bringing a brightness of flavour and lightness of texture that sings of summer. Even better made with home-grown tomatoes, this dish is perfect for a quick, flavourful lunch or dinner. 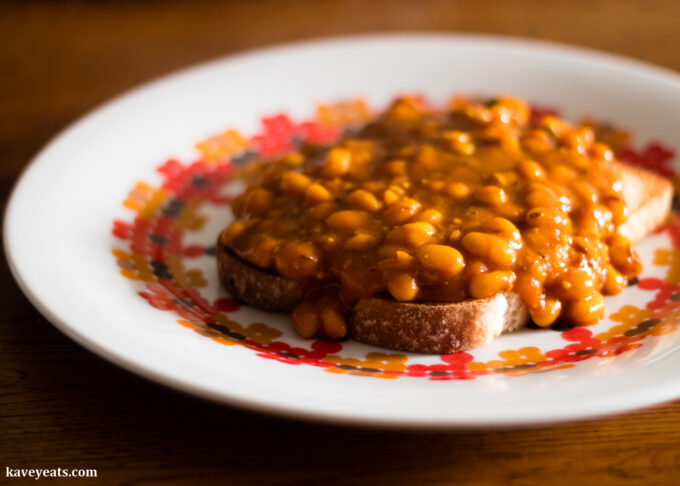 The Baked Beans Shaak is slightly hit and miss for us, though just a teaspoon of salt away from ding ding ding! The cloying sweetness of tinned baked beans is wholly subsumed by the punchy spicing which is great – such a clever way to transform sweet baked beans into a fabulously punchy, savoury curry that takes minutes to make. But the salting feels heavy-handed (to our tastes) – to the extent that I’m unable to eat my portion. However, we’ll definitely give this recipe another try (tweaking the salt levels down a peg), as it’s a winner anytime you need a quick snack or light meal. We had ours on toast, but it can be also be paired with rice or Indian breads. 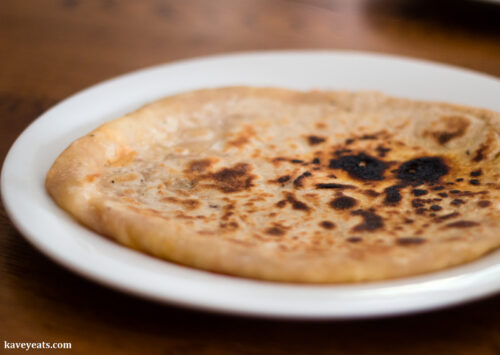 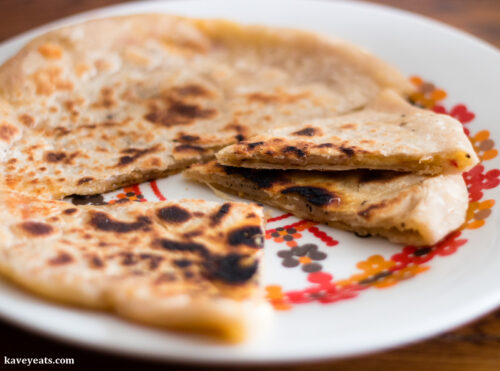 Next we make Herals Mum’s Cheese and Green Chilli Parotha for a weekend lunch treat and these are a joy. The dough and filling recipes are straightforward and quick, as is filling and rolling out the parothas, and cooking them! This is one of those recipes that punches above the weight of its very simple parts, and is perfect for any occasion – it works for breakfast, lunch, a snack or even a light evening meal! We’ll likely adapt this recipe by trying a whole range of other fillings too.

There are many other recipes that I’m drawn to including Chilli and Honey Roasted Peanuts, Cheddar Cheese and Spinach Bhajia, Rice Flour Dumplings (Kichee), Cheese and Chevro Sandwich (I only noticed my focus on cheese as I wrote those last three!), Peanut-Stuffed Baby Aubergines, Jaggery Fudge with Sesame, and Millionaire’s Burfi.

As well as an excellent insight into Gujarati food, Biting Biting is a warm and joyous insight into the Roe family kitchen, and Urvashi’s sense of sharing and hospitality. It’s also a delicious introduction into a world of snacks and quick meals that are so much more exciting and delicious than opening a pack of crisps or biscuits!

We have permission from Kitchen Press to share some recipes with you from the book [coming soon]: