I used to visit Paris a lot. My first visit was with my family when I was 11 and I had been learning French at school for a few months. My parents’ expectations of just how fast one can learn a new language were wildly unrealistic and I was woefully unable to translate menus or place orders in French, but I still loved the trip. Fast forward a few years and French was not only one of my favourite subjects, it was one I was pretty good at. By the time I did my sixth form college French language exchange I was able to confidently babble away in French, even though I knew there were still huge inaccuracies in my grammar. After spending a few months of my gap year working as an au pair in a teeny tiny village in France (during which I spent most weekends in Paris), I was finally pretty much fluent.

Paris quickly became a favourite city to visit and I went often – with various different friends, with my sister and with Pete, loving the role of showing them a city I loved, and being able to use my language skills as well. I lost count of the number of trips I spent exploring the streets of each Paris arrondissement, visiting the sights, jumping on and off the Paris metro, shopping at food markets and supermarkets, finding the coolest vintage clothes at the flea markets of St Ouen and eating gloriously cheap prix fixe menus in one of the plethora of classic bistros all around the city.

Paris was not only affordable, even on a student’s budget, it was a foreign city that was at the same time increasingly familiar. And of course, the food was a huge draw.

But somewhere along the line, my quest to see more of the world overtook the pull of the familiar and Paris fell from my thoughts. The last time I visited was when Pete and I took our niece Rosie to Paris when she was 13, and we delighted in sharing her discovery of the joys of travel. That was back in 2001!

Fast forward to earlier this year when I was invited to attend Paris Le Plus Grand Bistrot – an awards ceremony celebrating the best 100 bistros in Paris. As well as attending the awards themselves, hosted in the incredibly grand and lavish Marie (town hall) building, the itinerary also included visits to three Parisian bistros, a French cookery lesson, a food walking tour and a visit to Rungis International Food Market (more of which soon). 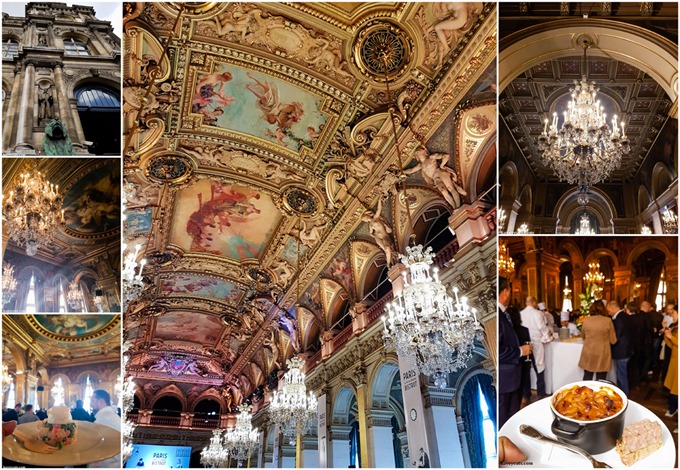 All 100 bistros recognised in Paris Le Plus Grand Bistrot showcased the following qualities in their bistros:

After the formal awards ceremony, we enjoyed a buffet with dishes created by many of the same chefs and their teams, sharing some of their signature dishes in miniature form.

Bistronomy – a portmanteau of bistro and gastronomy – represents the enjoyment of superbly cooked, high quality ingredients served in a friendly bistro environment. Classic French bistro fare has been revitalised, using some of the techniques and attention to detail of classic gastronomy, but it is served without all the pomp, circumstance and hefty price tags of the old school.

The word itself was coined back in the nineties by French journalist Sébastien Demorand in response to the intentions expressed by recognised founder of this culinary movement, chef Yves Camdeborde. The idea has been slowly but surely been gaining ground for 25 years, but it’s in the last few years that bistronomy has really come into its own, embraced wholeheartedly by the new generation of young French restaurateurs and chefs. Even the long-established doyens of the industry – who earned their reputations running high-end temples to traditional gastronomy – are now launching casual eateries where their food can enjoyed by a wider range of customers.

Of the 100 bistros awarded, many are the epitomy of modern dining – often tucked in to spaces that are too small for a classic restaurant, and with an altogether different vibe. Others have the more traditional trappings, but embody bistronomy by virtue of their menus – a step beyond the steak-frites of old. 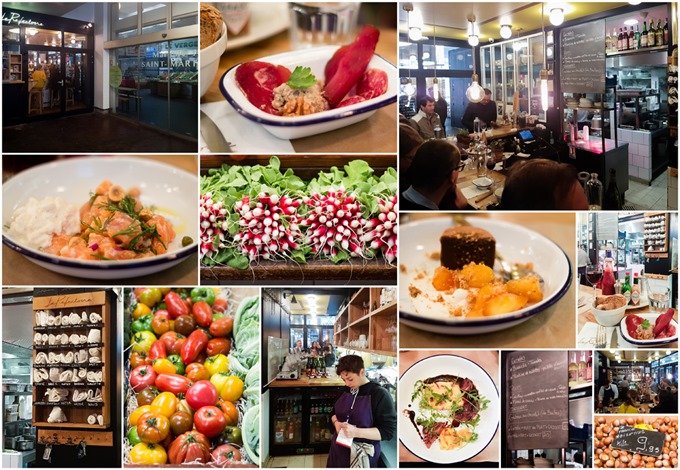 Le Réfectoire – though inexplicably not included in the 100 – is just such a place. It’s a cosy and casual restaurant bar squeezed into a small unit within the Marché Saint Martin, one of Paris’ many neighbourhood food markets. In 2012 chef Valentine Davase launched her business in a food truck, one of the first in Paris – another trend that’s exploded in recent years. The success of the truck also lead Davase to launch a catering business and it was this which resulted in her finding and taking on a preparation kitchen space within the market. With space to spare, she opened a counter-style restaurant within the unit in 2015.

Davase’s menu pays homage to the traditional recipes that her grandmother passed on to her, not to mention the respect for good quality produce which she instilled in her granddaughter at a young age. However Le Réfectoire’s menu also reflects a more modern creativity not to mention influences from Davase’s training at the Paris Ritz.

The menu is short and sweet with two choices each for starter and main and one dessert. For two courses, it’s 16 Euros, for the full three courses 20 Euros – quite a steal if you ask me!

Our lunch started with charcuterie and rillettes served with crusty brown bread. My starter of salmon tartar was the winning dish of the meal for me, served with a scattering of crunchy hazelnuts and the most surprising and delightful hazelnut foam. For my main I chose the duck breast, which came with polenta (I’d have preferred the potatoes listed on the board menu), mango, rocket and balsamic. Afterwards, a fondant chocolate cake.

Service (from the lovely Lilou) was charming and attentive without any of the haughtiness that I remember from many of the old-style bistros I visited in days gone by, and of course the food was delicious. 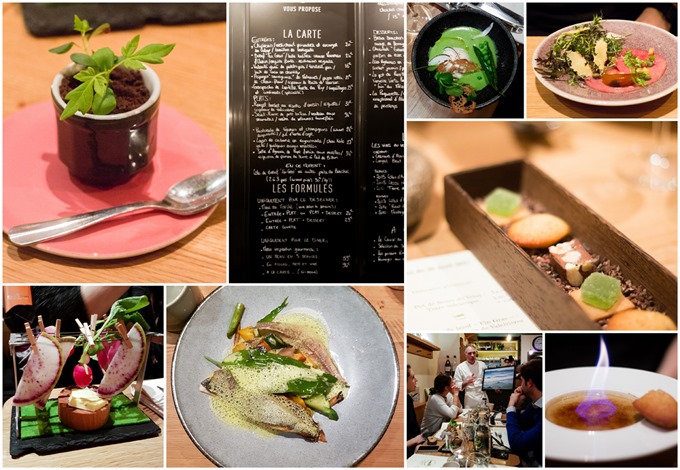 Another favourite from my visit was Anicia, the restaurant of François Gagnaire. Gagnaire ran a michelin-starred restaurant many years before deciding to open a different type of restaurant entirely, and in Paris this time. Here he shares his very novel take on cooking, drawing on both the produce and cuisine of his home region, the Haute-Loire. While the cooking is far more innovative and unusual than most Parisian bistros, the setting is very much bistro casual, without the starchy tablecloths and silver service of his

Our dishes here include slices of radish hung on a mini washing line and served with butter and salt. After that a little “Pot de Fleurs du Velay” plant of cocoa and mushroom “soil” over a Puy lentil base then a gorgeous beef tartare and salad. Next, my favourite – a main of perfectly cooked gilt-head bream (dorade in French) with wild garlic leaves, mushrooms and mixed vegetables, each element tasting intensely of itself in the most wonderful way. To end, a creme brulee featuring more of those Puy lentils, served with a perfect warm honey madeleine. And then a box of little sweet treats – financiers, chocolate nougat and pate de fruit over a bed of cacao nibs.

The prices at Anicia are quite a bit higher than Le Réfectoire – and reflect the space, the more elevated style of cooking and the reputation and training of the chef – but at 59 Euros for a five course menu (94 Euros with matching wines) they are still what I’d consider reasonable for cooking of this calibre and inventiveness.

Revisiting Paris after so many years feels like rediscovering an old friend, one that’s had a bit of a shake down as she moved into the new century – a new style, an altogether more grown up pleasure in eating out, and a new confidence! Definitely time to plan my next trip, and I won’t be leaving it 16 years this time!

Check out this 3 day Paris itinerary, these tips for a first visit to Paris, and these suggestions for some great day trips from Paris.

Kavey Eats visited Paris courtesy of the Paris Convention & Visitors Bureau and Atout France with the help of Travel Insight.

Please leave a comment - I love hearing from you!61 Comments to "Bistronomie | Paris Bistros in the Twenty Teens"