The Hotel du Vin chain is pretty well known now for their stylish and inviting hotels – they’re modern but not so achingly hip that us normal folk feel out of place! And their hotel restaurants, called Bistro du Vin, have proved popular not only with guests overnighting at the hotels, but with local diners too.

So it’s no surprise that they’ve decided to branch out by opening a standalone Bistro du Vin restaurant, the first of many to come. 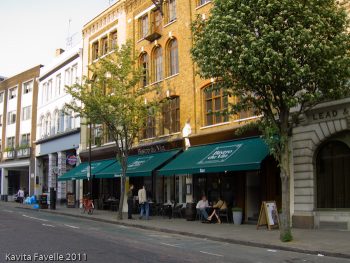 Situated in trendy Clerkenwell, a few doors down from St John Bar & Restaurant, the restaurant is half way between Farringdon and Barbican tube stations. Located in a handsome London yellow brick, with trees on the pavement and a few outdoor tables beneath the green awning, it looks very much the part of a classic French neighbourhood bistro. 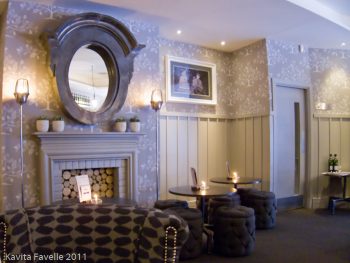 Inside, one first walks into a spacious bar area, decorated like a pretty living room with fireplaces, mirrors and framed prints on the panelled and papered walls. I rather like it, though it’s much darker than it looks in my photo, despite all the light spilling in from outside. 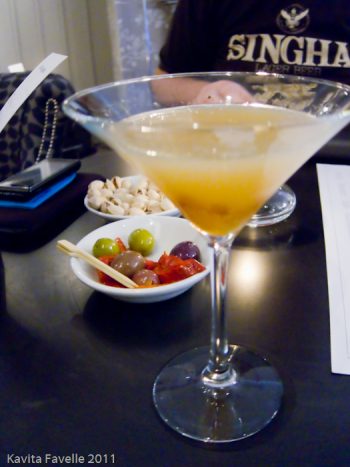 Quickly seated (and waiting for Pete), I check emails and twitter on my phone and discover a bistro du vin Wi-Fi in range. I connect and it takes me to a page that confirms it’s free but asks me to either log in with my full name and mobile telephone number or ask a member of staff for an access code. I ask; they tell me there isn’t such a thing. I refuse to provide my mobile number (which has carefully been kept off marketing lists these many long years) and enter a fictional one instead. Note to Bistro du Vin: I understand you might wish to restrict use to customers but please find a way to do so without insisting on provision of private telephone numbers.

I am pondering the drinks menu when a friendly barman suggests a cocktail featuring marmalade vodka as well as marmalade itself. I agree, and it’s delicious. Shortly afterwards Pete arrives, and has the same. I like the nibbles – pistachios and olives with red peppers – that are placed before us with the drinks. 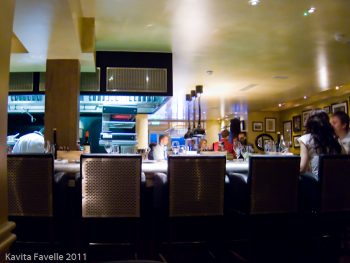 The bar leads through to the main dining area which offers a combination of booths and regular tables, plus a set of stools around the open kitchen. I rather like the kitchen gazing and wish I’d been given the option to have either an aperitif or our starters there, so we could watch the chefs at work, especially as I recognise John Woodward at the helm – group executive chef for the Malmaison and Hotel du Vin business.

At our table, again it’s a little darker than I’d prefer – I really like to be able to see what I’m eating in all its wonderful glory. But it’s a nice space, decorated to be traditional without being overbearingly so, and welcoming. 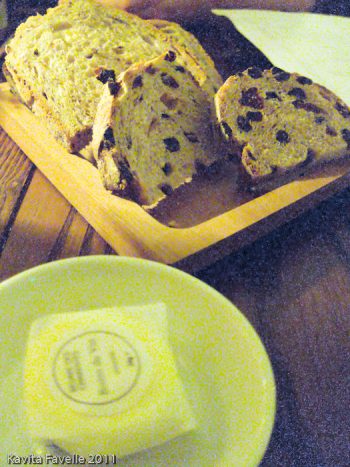 Orders made, bread arrives, with a pat of soft butter. The bread is soft and fresh and I particularly enjoy the generously fruited one. 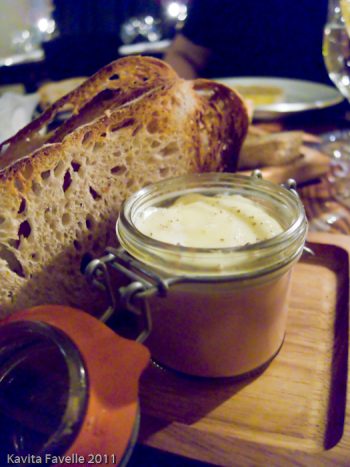 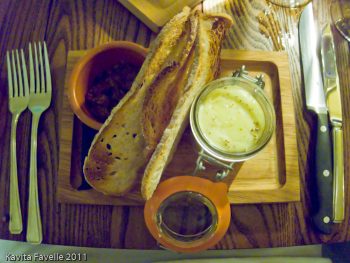 Pete orders the foie Gras & chicken liver parfait (£7.95) which is served in the ubiquitous kilner-style jar, with some thin toasts and a chutney. It’s an excellent parfait, though tastes much more of chicken liver than goose or duck foie gras. Tasty though, so no complaints!

We have asked our sommelier to suggest matching wines by the glass for Pete, and with the parfait, he recommends a chardonnay (the details of which he wrote down for me and which I’ve misplaced, annoyingly). Pete’s not usually much of a white wine drinker, but agrees that this choice cuts through the fatty parfait and compliments it well. 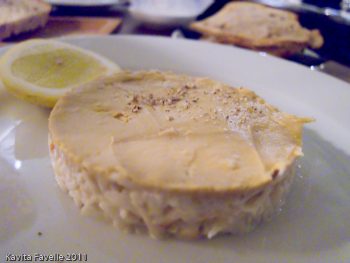 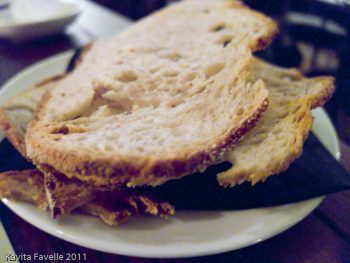 I opt for Cornish crab, toasted sourdough (£9.50) which is served in a dainty wide flat cylinder with white meat below and creamed brown meat on top. The sourdough toasts come on the side. The crab is just what it should be – deliciously fresh and sweet. I do find two small pieces of shell within it, which lets it down, but it’s not a big deal. 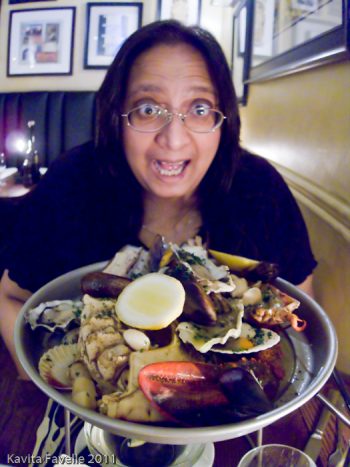 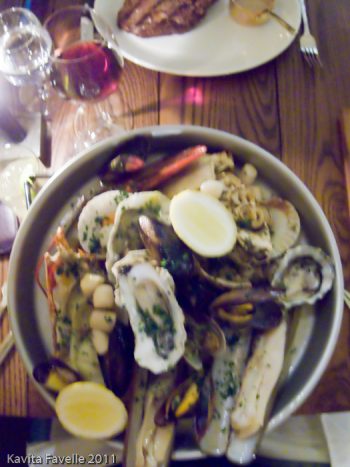 For my main, I stick with a seafood theme and order the Hot Roasted Shells (£28 for one or £55 for two). A huge platter of freshly grilled lobster, crayfish, razor clams, oysters, crab claws, mussels and small and medium scallops is balanced on a stand before me. I love this idea to serve a warm version of a fruits de mer platter, which I believe was inspired by Rick Stein’s Seafood Bar, where shellfish are served hot from the Josper Grill. Since this kitchen also has a Josper Grill, this dish works just as well here. It is a hugely generous portion, with a hefty lobster tail and claw (in the shell) and a large chunk of crab alongside the easier-to-eat bivalves. Fantastic! 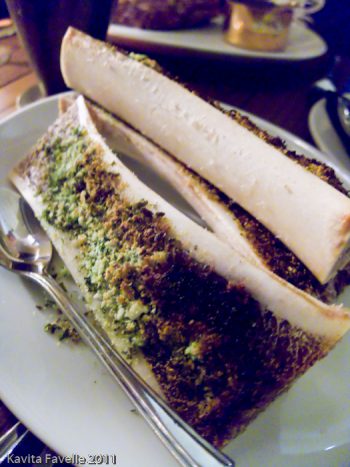 For my sins, I cannot resist also trying the side dish of roast bone marrow (£3), though when I see the size of my seafood platter, I regret it! The bones are cut in half vertically, and bread crumbed before being grilled. But they have been cooked too long or hot, and the burned edges are not edible. The bites of the unburned sections are tasty though and had I not been so overwhelmed with my main, I may have asked for a fresh portion. 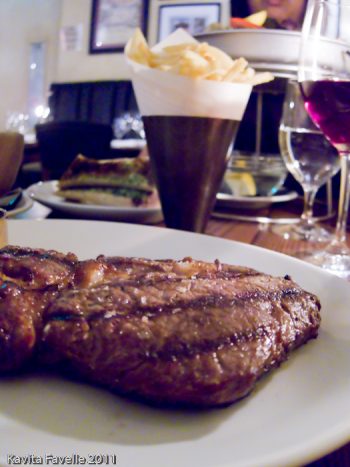 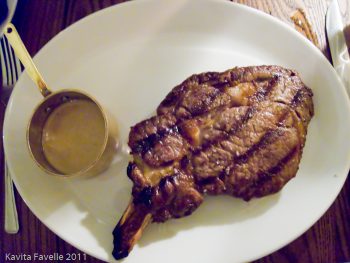 Just as I stick to seafood, Pete sticks to meat, and orders a steak (cote de boeuf, I think) with fries and a roquefort sauce. Cooked on that much-respected Josper, the meat is beautifully tender and flavoursome – very good indeed. That’s no surprise, since it comes from respected Aberdeenshire butcher Donald Russell.

And this may be a good time to let you know about the policy of buying home grown, seasonal food wherever possible. Many of the suppliers are named on the back of the menu; it’s abundantly clear that this is a genuinely applied ethos and not just a marketing gimmick. 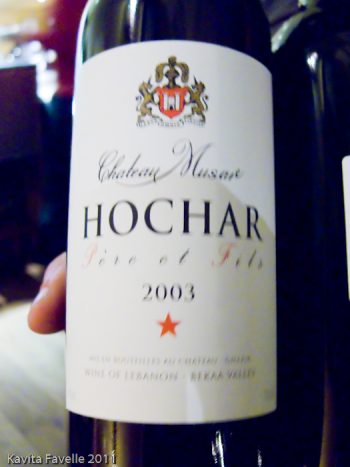 Again, our sommelier suggests a wine match for the steak, offering Pete a Lebanese red wine. We’re delighted, as our visit to that country is just a week away. Pete likes the Chateau Musar Hochar Pere et Fils 2003 very much and we ask our sommelier to show us the bottle, that we might have a better chance of recognising and purchasing it during our Lebanon trip. 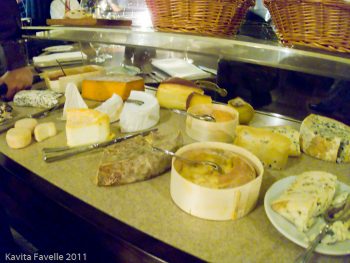 After our mains, full though we are, we insist on sharing some cheese, having ogled the cheese trolley on our way into the dining room. The cheeses are provided by Eric Charriaux (the co-founder of La Cave a Fromage), so my expectations are high. Rene brings over the trolley and starts to tell us about the cheeses; he is surprised I recognise and am excited by the aged St Nectaire, amongst others. Sensing an interested audience, he enthusiastically tells us about the rest of the cheeses, explaining, after we ask, that he’s new to cheeses but learning as much as he can. 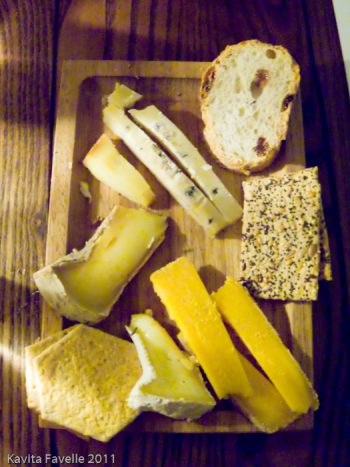 After a pleasant discussion, we choose a few and he cuts the pieces for us. But, oh, how disappointing. Although the flavours are delightful – clearly aged perfectly – every single one of the 5 cheeses we try is really, really dry, almost powdery.

Those of you who watched the BBC2 series Service, where Michel Roux and Fred Sirieux train eight youngsters into front of house roles, will recognise Danielle, who was awarded a sommelier scholarship at the Hotel Du Vin in Winchester. She’s now working at the Bistro du Vin in Clerkenwell and comes across to suggest a different pairing for the cheese course, a reisling. The sommelier who has been looking after us throughout our meal makes the same recommendation, and Pete finds himself having his second white wine of the evening, and agrees it is an excellent match, working well with all the cheeses except the blue, just as we were told. 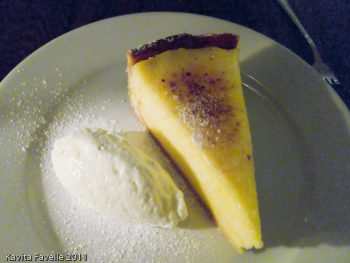 I don’t have room for dessert but Pete says his lemon tart is nice, though the texture isn’t as good as a number he’s had elsewhere. Good but not great is the verdict.

I have a glass of rich, Christmassy Pedro Ximinez instead.

It’s been a wonderful meal – the kind of food that makes good eating. And service has been good too.

This is just the kind of place I love for a relaxed dinner with friends, so I’m pleased to learn from John Woodward that a second branch is due to open in Soho very soon. (6 weeks after my visit to the Clerkenwell branch which was in April). As that’ll be much easier for me to get to, if the food, service and ambience match up to this branch, I’ll likely be a regular.

Please leave a comment - I love hearing from you!6 Comments to "Bistro du Vin, Clerkenwell"