We received a review copy of this book from publishers Pavilion.

Diversity in the world of cookery books is a good thing, a very good thing indeed.

For decades, the UK food publishing world has been dominated by white authors. Writers of different ethnic and cultural backgrounds have struggled to get a seat at the table, and when they do, they’re often pigeonholed into titles tied to their ethnicity and culture. In contrast, white authors have been given the freedom to write not only about British food, but about cuisines from all around the world. This state of affairs is certainly changing and improving–albeit slowly–with many publishers making concerted efforts to work with a more diverse range of authors; I’d still like to see the best ethnic minority food writers being given the same backing to write about different cuisines and topics as the best Caucasian food writers, but we are at least moving in the right direction.

On of the books I’ve most enjoyed this year is “Big Has Home: Recipes from North London to North Cyprus” by Hasan Semay. Hasan isn’t your typical food writer or TV presenter, and as a sweary chick who grew up in Luton I adore his cheeky chappy, slightly sweary, spliff-smoking vibe! It’s a breath of fresh air that I really connect to. 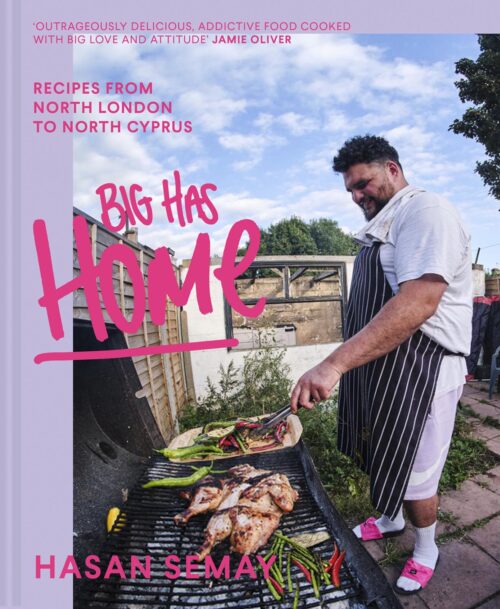 After falling for cooking shows on TV in his youth, Hasan dreamed of being a TV chef. That said, he wasn’t blind to the elitism of TV food shows in which mostly middle-class chefs cooked with expensive equipment in beautiful, big kitchens. Being practical and wanting to keep his dad happy, Hasan enrolled in a plumbing course but quickly realised it wasn’t for him; nor was the role of art gallery security guard that he did for the two years following. It was his mum who found out about Jamie Oliver’s Fifteen–a programme developed to train disadvantaged youths as professional chefs–and she helped him fill out the application form. He was twenty when he won a coveted place in the 2011 intake, embarking on 13 months intensive training.  After graduating in 2013, Hasan worked for a decade in professional kitchens, further honing his skills.

He started his own YouTube channel (Big Has Sunday Sessions) a year or so back and is currently running a pop up at Islington’s Sessions venue.

“Big Has Home” is Hasan’s first cookbook, and I hope it’s the first of many. Hasan’s cooking style takes it’s core influence from the Turkish-Cypriot cuisine of his father, but also incorporates much from his North Londoner mother, from the Caribbean community in Edmonton where he grew up, as well as Italian influences from some of the restaurant kitchens in which he worked. He’s big into BBQ–a love he’s inherited from his father–and loves to cook outdoors all year round.

In the book’s eight-page introduction, Welcome Home, what comes through loudest is the fierce love Hasan has for his parents and family, and the enduringly deep and loyal friendships from his childhood that are still at the core of who he is today. He paints a picture of his life growing up in North London, and the music, food and cultural influences from his Turkish-Cypriot dad and Londoner mum, from his closest friends, and from the Caribbean community, amongst others in his neighbourhood. We read about trips to Cyprus, cooking with his extended family, relaxed days cooking in the garden and smoking spliffs with his friends or going to football, the life-changing experience of getting into and graduating from Jamie Oliver’s Fifteen, and some of his key mentors in the cooking world.

Next, some practical guidance in A Note on Ingredients, in which he runs through key ingredients including salt, pul biber, aci biber salçasi, cheese,  lemons and herbs, produce such as potatoes, tomatoes, fish, eggs, and melons, pomegranate molasses, strained yoghurt, kadayif, baldo rice, pomace oil and Turkish ketchup. Some I know of, others are new to me and will be sought out next time I visit the Turkish shops in Cardiff.

Before the recipes, two pages on How to Light a BBQ explain the ‘counts’ method to measure the heat of a BBQ, which Hasan learned as a kid and continues to use today. This section is an endearing mix of instructional and biographical, sharing more of Hasan’s life stories including why he calls his dad Kamil, rather than dad.

Recipes are divided into chapters for Small Plates, Cypriot Dishes, The Grill, Italy and Something to Finish.

The recipe summaries are another opportunity for Hasan’s personality to shine through, providing not only an introduction to the dish, but many more personal memories and anecdotes. Food photography is bright, bold and very Hasan, with lots of shots taken outside, and many featuring Hasan with his friends and family. 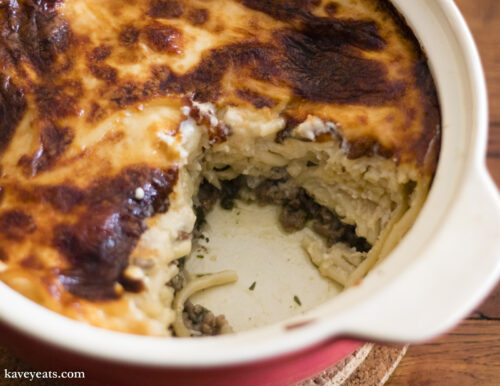 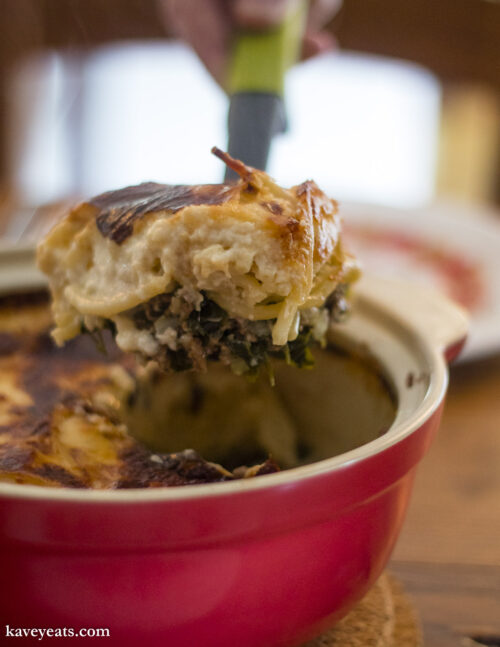 Cooking from Big Has Home has been a pleasure. The first recipe Firinda Makarna, from the Cypriot Dishes chapter, is somewhat similar to an Italian lasagne, in that it features minced beef, pasta and a cheesy sauce. However, in this dish, the beef is fried with onions, parsley and seasoning rather than made into a ragu, and the pasta is bucatini (long, thick tubes) rather than lasagne sheets. The cheesy sauce is a fairly classic béchamel using parmesan, helim and kasar peyniri (or any other stringy cheese–we used mozzarella). It’s quick and straightforward to make and absolutely delicious. 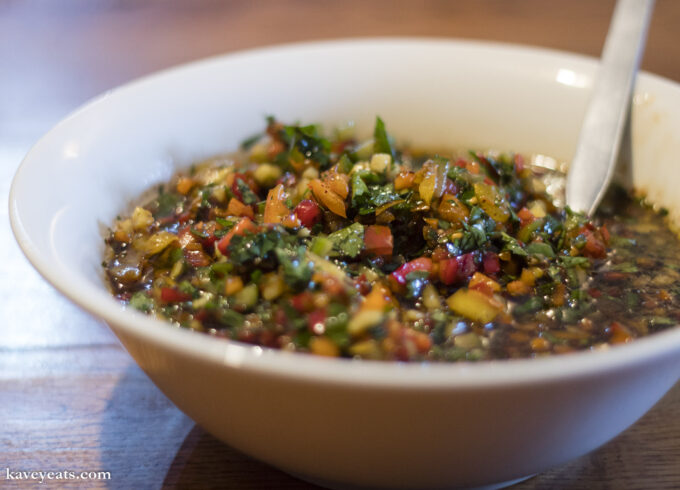 From Small Plates we make Ezme (a longtime favourite of mine) and Helim, Sausages, Pickled Shallots and Honey. For the Ezme, we love the copious dressing of pomegranate molasses, balsamic vinegar and olive oil mixed into peppers, cucumbers, tomatoes, onions, chillies and lifted with parsley, mint, paprika and sumac. It’s like the sophisticated sibling to the simpler ezme salads I’ve been enjoying in Turkish restaurants for so many years. 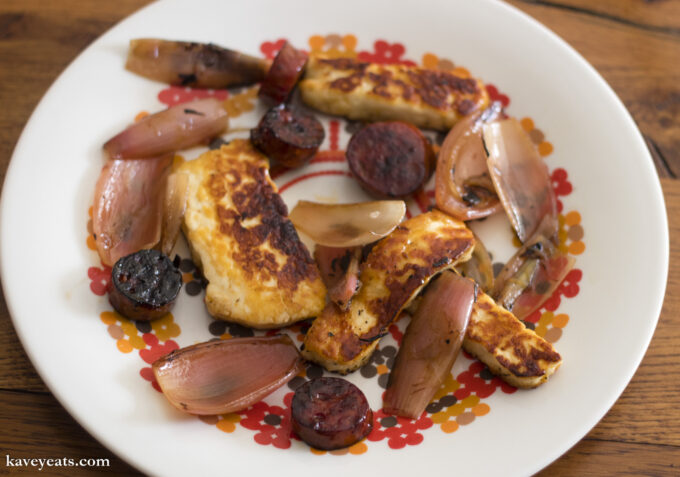 The Helim, Sausages, Pickled Shallots and Honey makes a wonderful, summery lunch. As suggested, we subsitute pastirma for chorizo, as it’s easier to find in our neck of the woods. The combination of flavours and textures is a winner, and very easy to make.

The Index is reasonably good–I like that recipes such as adana kebabs are listed both under “A” for adana and under “lamb”, for example, and that general headings like “pasta” group different pasta shapes in one place–but there are odd gaps: fried red mullet is listed under “B” for barber and under “red mullet” but is missing from “fish”. On the other hand, jerk pork is listed under “J”, “chillies” and “pork”. Certainly it’s more usable than many cookbook indices I’ve seen!

There’s also a UK/ US glossary which will no doubt be useful for global audiences (and of course, recipes provide measurements in both metric and imperial).

At the end of the book, a much-longer-than-typical Acknowledgements section underlines once again how important family and friends are not only on a personal level, but in their influence and involvement in what and how he cooks. This, for me, is a core facet of the whole book.

I’ve found over the years that some first books–the ones in which authors earnestly share their life story alongside their journey into cooking and their foodie ethos–can tend towards the self-indulgent; I adore stories that help me get to know the author, and which furnish me with insight into a culture or cuisine, and a connective thread for the recipes to come, but this kind of writing need a really good editor to ensure that it doesn’t descend into a personal diary, of interest only to those who know personally the author. In Big Has Home, the balance is just right–I’m left feeling like I do know Hasan personally (and wishing I did so I could have a seat at his table). I’ll make do with enjoying his recipes at my own table instead.

Recipes from Big Has Home

We have permission from Pavilion to share some recipes with you from the book:

Please leave a comment - I love hearing from you!3 Comments to "Big Has Home by Hasan Semay"