Venice is one of the most enchanting and beautiful cities in the world. Finding the best vantage points to look down on the city from a height gives you a great perspective and some truly magical views.

Here are my top three places from which to enjoy that bird’s eye outlook. 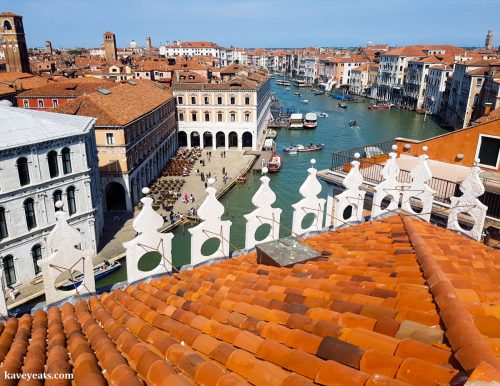 Right next to the Rialto Bridge, on its East side, this is a new kid on the block in terms of an accessible view, though the building itself dates from 1508. During its varied history it’s been used as a trading post for German merchants, a Napoleonic era customs house and a post office during the time of Mussolini. In 2016 it opened it’s doors as a luxury shopping centre, with many of the world’s most iconic luxury brands represented. The panoramic rooftop terrace is accessed via a modern hall on the 5th floor (which currently showcases some amazing artwork made from postage stamps). There’s currently no charge, but you do need to reserve a place for a given time slot. If it’s not a busy day, you can do that on arrival, and go and grab a coffee or gelato nearby if you can’t get in straight away. In high season, I strongly recommend reserving your slot in advance. You’ll have 15 minutes to enjoy the incredible views out over the Grand Canal and the Rialto Bridge, and indeed 360° degree views across Venice’s red-tiled roofs. 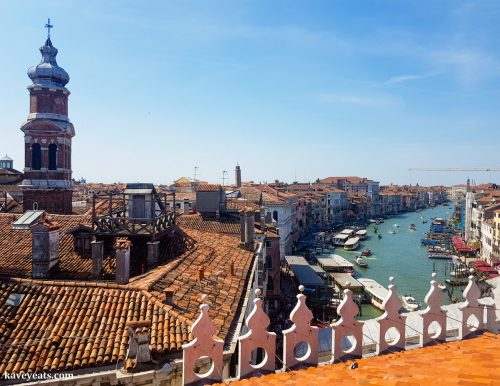 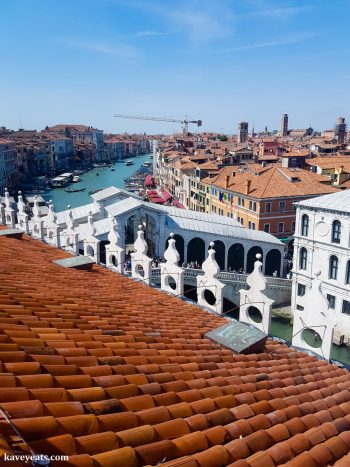 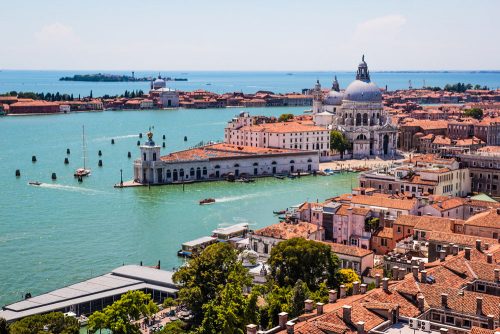 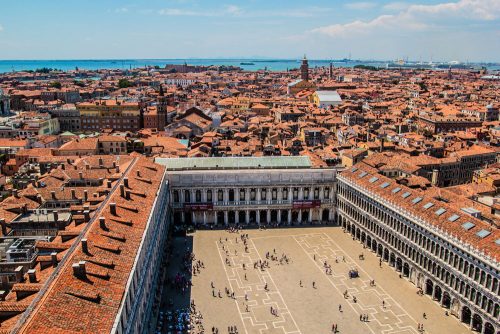 If you notice that the Bell Tower of St Mark’s looks pretty new compared to the Basilica di San Marco and the Palazzo Ducale (Doge’s Palace), you’d be right. It was completely rebuilt following its collapse in 1902. Only one of the five original bells survived to be re-hung; the other four are now reproductions. The first tower on this site was constructed as a lighthouse in the 12th century, though there is evidence it was built on the foundations of a Roman era watchtower; it was rebuilt several times in the following centuries with the belfry added in the early 16th century. Today’s tower was rebuilt to the same external design as the one that collapsed, but with a stronger structure internally, and re-opened in 1912 on St Mark’s day. The queue to go up the tower (by lift) is almost permanent (access is 8 Euros per person) during opening hours, but you can book your slot in advance for a 5 Euro per person surcharge. 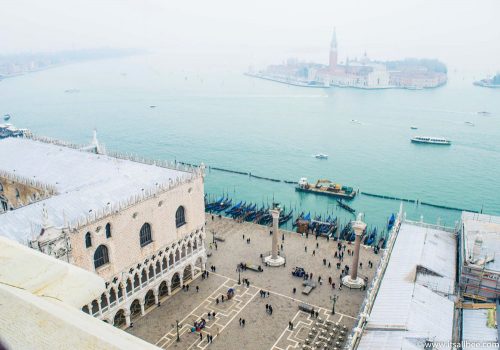 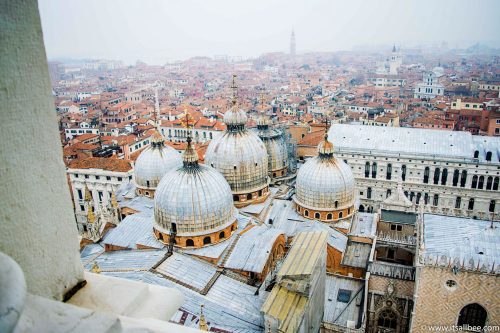 Images courtesy of Bianca at Its All Bee 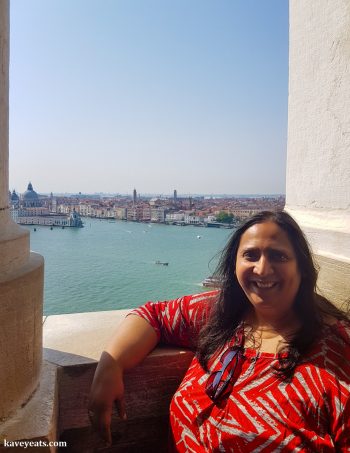 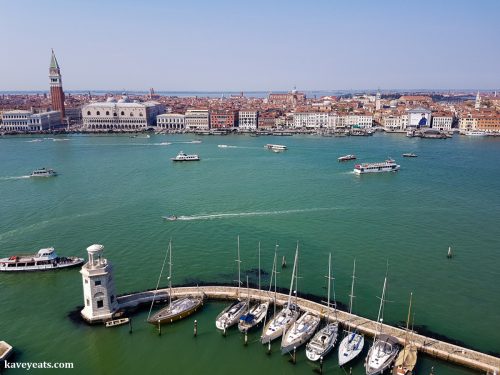 A viewpoint I love even more than the Campanile di San Marco is the Campanile of 16th century Benedictine church, the Chiesa di San Giorgio Maggiore, a short hop by vaporetto (water bus) from San Marco to the tiny island at the tip of Giudecca. The strikingly beautiful basilica is built of white marble in a classical renaissance style. The original bell tower fell in 1774 and was rebuilt in 1791 in a neo-classic style. Situated across the water from Piazza San Marco, the 360° degree views from the top of the campanile encompass the Doge’s Palace, Basilica and Campanile of San Marco, as well as the length of the Riva degli Schiavoni waterfront down towards Arsenale, the glorious Basilica di Santa Maria della salute and the Punta della Dogana in Dorsoduro, the red-tiled rooftops of Giudecca, and the Fondazione Giriorio Cini gardens and marina of San Giorgio Maggiore island itself. I love how these views emphasise the island topography of the Venetian lagoon. Access via lift is through the church, and costs 6 Euros per person. 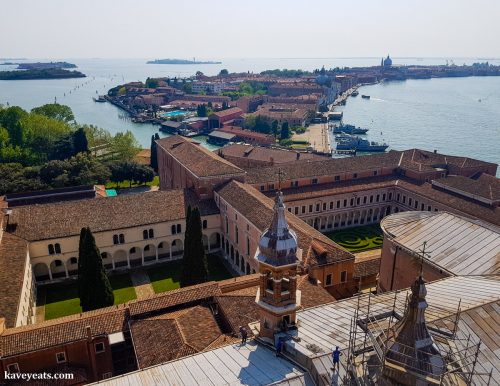 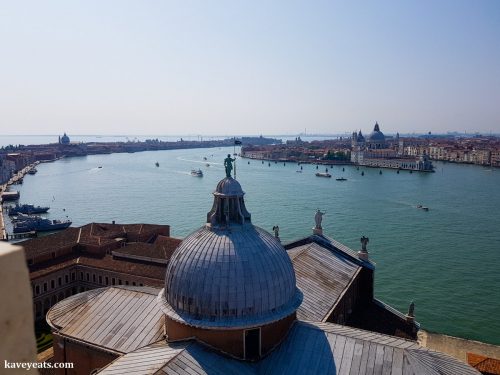 As you can see, Venice is a true gem, and often a highlight of any Italy itinerary.

More Places From Which To Enjoy The View

Many of the best spots for an elevated view over Venice are within some of Venice’s preeminent hotels, and entrance is (understandably) restricted to guests of the hotel or bar customers. As many of the views are from the hotel’s restaurant or bar, you can visit as a drinking or eating customer, though check menu prices first if you’re on a budget – these are some of Venice’s most expensive venues! Some of the best views can be found in The Hotel Danieli, the Hilton Molino Venice and The Westin Europa & Regina.

The Bridges of Venice

While the highest point of bridges like the famous Ponte di Rialto, and the Ponte dell’ Accademia (currently closed for refurbishment) aren’t all that high, their position across the Grand Canal means they are still an excellent choice for panoramic views. They offer a great opportunity to capture the water traffic along the canal, as well as some of the beautiful architecture of the palaces lining it.

The views from this famous open-air spiral staircase aren’t as highly elevated as the campaniles or shopping centre rooftop, nor do they overlook the waters of the lagoon or canals. However, the red-tiled roof tops are always a delight, and the beautiful arched windows frame the view gloriously. 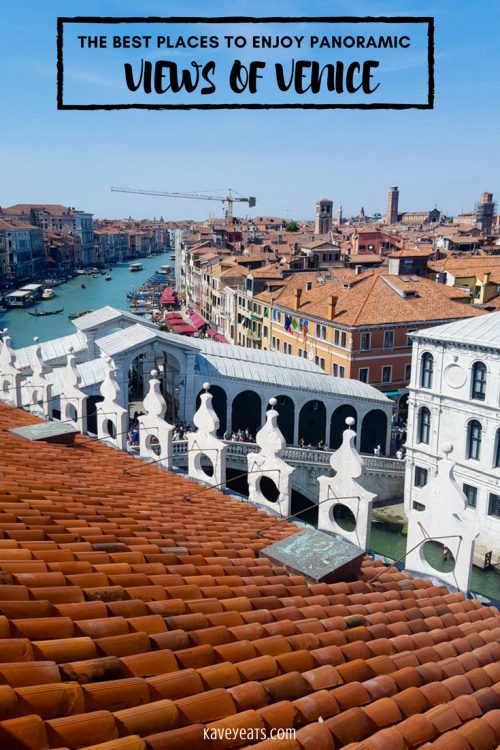 Thanks to Hayley and Bianca for their images of the views from Campanile di San Marco. Somewhere, probably in a musty box in my attic, are a pile of film negatives and prints from my own visit to the top of the bell tower!

Please leave a comment - I love hearing from you!56 Comments to "The Best Places to Enjoy a Panoramic View of Venice"