The Scarlet Hotel‘s restaurant is in the very capable hands of Ben Tunnicliffe, formerly of The Abbey in Penzance, where he earned a Michelin star for his cooking.

Ben gives a frank, informative and sometimes amusing account of his cooking career on the hotel’s website. He also reveals his food philosophy which boils down to making people happy, by focusing on “flavour first and foremost, simplicity second and aesthetics last”, whilst sourcing locally and seasonally as far as possible. This isn’t just lip service – Ben is proud of the relationships he’s built with suppliers, some of whom he’s used for many years. And he won’t compromise on seasonality just to give guests what they might expect. No orange juice for breakfast in winter (when European oranges are not available) – instead a delicious local apple juice.

Having enjoyed a lovely meal in the restaurant on our first night, we very much enjoyed meeting Ben the next day to find out more.

(I should mention that several of the hotel staff were taking part in Movember, in case you’re wondering about that impressive ‘tache!)

The video interview done and dusted, we had some fascinating off the record chitchat (about the industry in general and some of those who work in it in particular) and a tour of the kitchen. And, gosh, Ben’s vast purpose-built kitchen would be an absolute dream for many chefs – it’s several times bigger than even the larger ones I’ve seen in London! 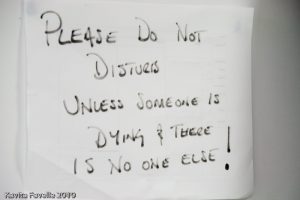 The sign on the door of Ben’s office, within the kitchen, put a smile on our faces!

The restaurant space is, like all of the hotel, designed to look out to sea. On a winter evening, it’s far too dark to see the beautiful view, but I would be glued to the window during the summer, I’m sure. 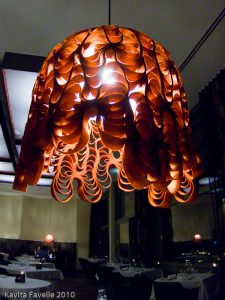 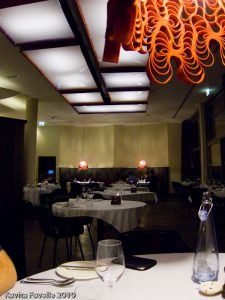 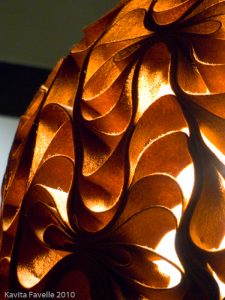 We ate in the hotel restaurant on 2 consecutive nights. 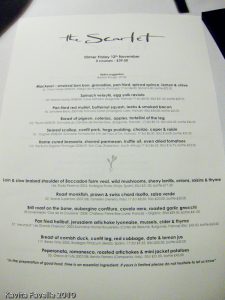 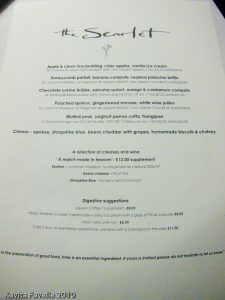 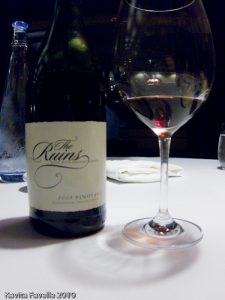 With each course a wine (available by the glass, 50 cl carafe or full bottle) is recommended. The full wine list is Europe-based (to reduce air miles) and The Scarlet aim to support smaller producers, including a number of organic and bio-dynamic wines. 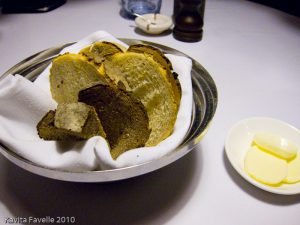 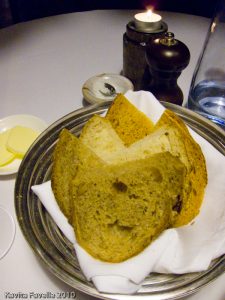 The bread basket were a thing of wonder. On the first night, our three breads were white, walnut treacle and cinnamon raisin. The next night the cinnamon raisin was replaced by a fennel and paprika bread. All fresh, beautifully textured and delicious. 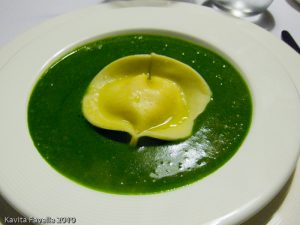 Pete’s spinach velouté with egg yolk ravioli was a welcome shock of colour. The consistency was excellent – not too thick, not too runny and slippery silky smooth. It had a punchy fresh vegetal flavour. And when Pete broke into the raviolo a perfect soft yolk spilled out and added it’s colour and flavour. The pasta wasn’t gossamer thin but thin enough and cooked al dente, which gave a nice bite against the the liquid soup, though it could have done with a few more seconds, ideally. 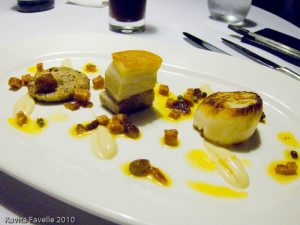 My seared scallop, confit pork, hogs pudding, chorizo, caper and raisin was very enjoyable, overall. The scallop was lovely, seared to add a touch of char in flavour and texture, yet still sweet and just cooked within. The pork belly was absolutely spot on with plenty of fat cooked till meltingly soft with a lovely cap of crunchy chewy skin. The hogs pudding (which was presented as a slice of a larger sausage) didn’t do much at all for me; I found it very bland. I’d wondered whether the chorizo, raisins and capers would overwhelm the more delicate pork and scallop but instead, they enhanced and complimented. With the exception of that hogs pudding, I thought this a great appetiser; it made my mouth water for what was to follow. 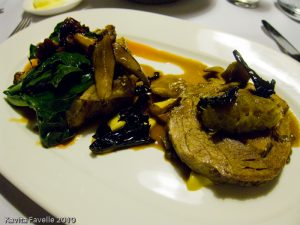 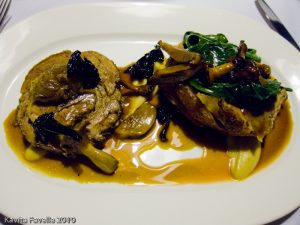 Both of us chose the loin and slow braised shoulder of Boccadon farm veal, wild mushrooms, sherry lentils, onions, raisins and thyme. The slow braised shoulder was very, very tender, though we both found the herb flavours too strong. The loin was fabulous – soft, pink and with wonderful flavour. For me, the star of the plate was the selection of wild mushrooms which included girolle (also known as golden chanterelle), black trumpet and cep (also known as porcini). And, oh my god, the rich, sticky, incredibly umami gravy with the merest hint of sweetness was the perfect finish. Usually not a fan of lentils, the sherry lentils went a long way to converting me. Even more surprising, a light cabbage pickle was light and refreshing – not overpowering, as I usually find pickled cabbage. The iron-rich purple sprouting broccoli was just the right vegetable to finish the dish. 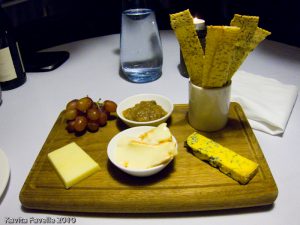 We had a hankering for cheese as well as dessert so ordered an extra course. We liked that our waitress immediately asked whether we’d prefer it before or after dessert, rather than simply imposing a preference on us, as many restaurants do.

The selection of cheeses changes every day. On this day, our three were Keen’s cheddar, Shropshire blue and Epoisses, which made me squeal in delight because I adore Epoisses and resulted in a lovely chat with our waitress who had not tried it before. I warned her it was a fairly strong one but encouraged her to try it for herself! The cheeses were served at room temperature and were beautifully ripe to just the right level. They were served with some honey-sweet grapes, a chutney that we felt was rather too weak against the robust flavours of these cheeses and crackers which again, for my taste, were not a great combination with the cheeses, but would have made nice snacks on their own.

Before desserts, I mentioned to the waitress that I had a sore throat. She immediately offered a hot drink to soothe it and when I asked for mint tea, she went to make it (with fresh mint) straight away. I really appreciated her clearly genuine concern and thoughtfulness. 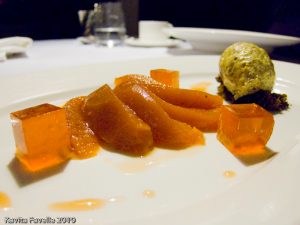 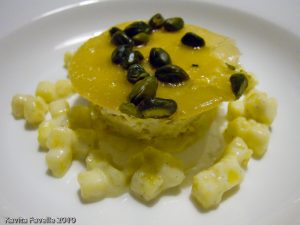 My honeycomb parfait, banana compote, roasted pistachio brittle was also a mixed bag. Overall it was extremely sweet. Too sweet, even for a very very sweet-toothed person like me. The parfait was decent, with a good honeycomb flavour. The banana compote was essentially posh cubed bananas in custard; pleasantly school dinners. The pistachio brittle tasted delicious but was a bit thick and heavy, I think.

On Saturday, we again dined in the restaurant. First out was the bread (see above). 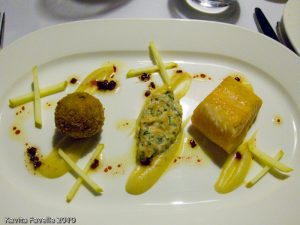 Pete chose a trio of salmon preparations for his starter – mi-cuit, rillette & fishcake, apple & beetroot. The filleted piece of salmon was very lightly cooked, allowing the delicate salmon flavours to shine. The rillette was a nicely balanced soft, wet salmon pâté. The spherical fishcake was tasty. All worked well with the pureed apple and tiny beetroot cubes. 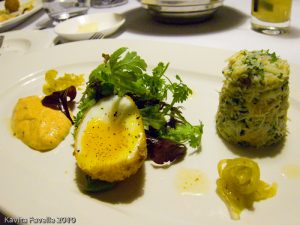 I really enjoyed my potted crab, brown crab mayo & crispy egg too. The tower of crab meat is more generous that it looks in the photographs and was fresh and sweet. I loved the fresh, hot crunch of my crispy egg, with it’s perfectly soft, runny yolk. The brown crab meat mayo was a winner; deeply, deeply flavoured. 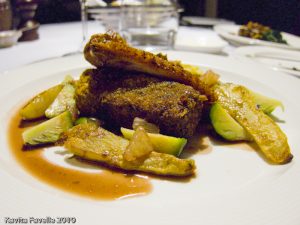 Pete’s breast of Cornish duck, Jerusalem artichokes, pressed confit leg, sprout top choucroute, date & lemon was an intriguing choice – I wasn’t sure how the artichokes, choucroute, date and lemon would balance. The duck was cooked just right with crisped skin and pink flesh. The Jerusalem artichokes were nicely cooked and much more appealing than when I’ve encountered them before. The sprouts and bacon were very seasonal; I would not have picked them to go with duck but I liked them. The confit leg, pressed into shape and bread crumbed, was very good indeed, moist inside and picked up by the crunchy coating. We figured the sauce must be where the date and lemon were hiding, though they didn’t come through particularly strongly. All in all, a decent dish. 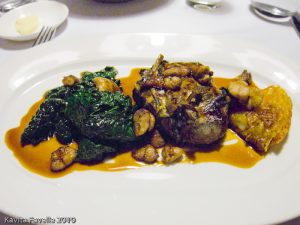 Although it was perhaps a little similar to my choice the previous night, I could not resist fillet of beef, wild mushrooms, veal sweetbreads, rosti potato. The beef was really excellent. Soft yet firm and with great depth of flavour. The mushrooms and morsels of sweetbread were another savoury umami hit and perfect on a rain-lashed winter’s evening. Dark green cabbage gave us that iron-rich vegetable balance (in place of last night’s purple sprouting broccoli). The rosti was crunchy, oil-soaked naughtiness – perhaps a touch too much oil but oh so good. And the whole thing was pulled together once again by a rich, sticky, concentrated sauce that I had to stop myself licking off the plate. 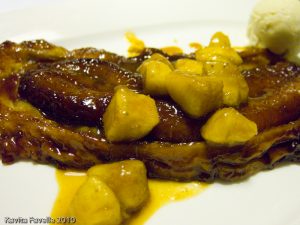 I adore banana desserts, especially when the banana has been cooked and caramelised so could not resist the banana upside down, vanilla ice cream, maple banana, lime compôte. The banana was very, very soft and the caramelisation had gone a little too far, giving too much of a burned sugar flavour for my tastes. I did like the combination of the tarte tatin style pastry with banana pieces in a maple sauce; they were very good. The ice-cream was so-so – not particularly rich, creamy or vanilla-tasting. I don’t recall the lime compôte at all and can’t spot it in any of my photographs; I wonder if it made it onto the plate?! 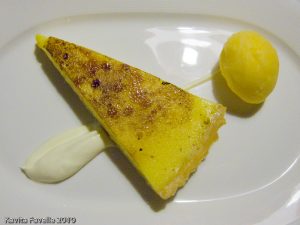 Better overall was the lemon tart, satsuma sorbet, crème fraiche. The lemon custard was just set and had a lovely wobble and a good balance between tart and sweet. The pastry was excellent. The sweet sorbet was subtly flavoured, and worked very well. It’s sweetness was offset by the crème fraiche. Simple but very good.

Over all, we very much enjoyed our two dinners in the hotel’s restaurant. I think, for the price, it would have been nice to have one or two tiny tasters in between courses, as one often encounters in London restaurants at a similar price point. But given the quality of the ingredients and the cooking, the prices are certainly reasonable.

The restaurant is open to non-residents, so do book yourself a table if you are visiting the area. Better still, indulge in a night or two at the hotel to enjoy the full Scarlet experience.