I planned to make beetroot and lemon cured salmon for Christmas day.

I planned a great many trootI planned to have a practice run a month or two in advance, trying out two different cures and choosing the one which worked best. No trial run happened. I planned to ask for more advice on recipe variations from expert friends. In the end I turned to recipes found on the internet and had a mild panic about which one to follow. I planned to order one enormous and gorgeous wild salmon fillet in advance. I failed to do so and went with what I could find in Waitrose at the last minute. But the wild Alaskan salmon they’d stocked a few weeks previously was nowhere to be seen, and the farmed salmon looked particularly insipid.

And that’s how I ended up buying two Loch Melfort trout fillets instead. The trout simply looked far more appealing and I decided, with no knowledge to back it up whatsoever, that it would work just as well as salmon for my purposes!

Having found a great many recipes for beetroot cured salmon online, I narrowed my choices down to Nigel, Jamie and Barney (from BBC Good Food).

All three offer fairly similar recipes and techniques featuring the salmon itself, salt, sugar and raw beetroot. Jamie and Nigel add citrus zest and vodka to theirs. Jamie and Barney include a little horseradish too. What varies most in their recipes are the proportions of beetroot, salt and sugar to salmon and how long to apply the cure. Jamie and Nigel both have almost the same salt to salmon ratio, but Nigel calls for more sugar and much more beetroot. Barney’s recipe calls for more sugar than salt and far less of everything against the salmon. Jamie recommends curing the fish for 48 hours, Nigel suggests 2 to 4 days and Barney stretches from 3 days up to a week.

I dithered between the three recipes for a frankly ridiculous number of hours before basing my ratios on the box size of salt I’d purchased, and what my trout and beetroot weighed!

I needn’t have worried so much. The finished trout was both beautiful and delicious. The purple-red and orange colours made it very festive for our Christmas day table but would also make this a lovely recipe to prepare for Valentine’s day. 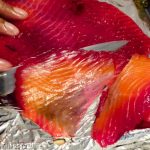 Scale the recipe up or down depending on the weight of your fish.

The beautiful purple-red staining had penetrated reasonably well into the flesh, and looked glorious against the bright orange. The second fillet, which was wiped clean at the same time of the first, then re-wrapped in cling film and left in the fridge for another day and a half, seemed to be even darker than the first, though they had both cured for the same length of time. Once back home, I removed the flesh from the skin in four pieces which were individually wrapped and frozen. I have wanted to cure my own fish for the longest time, but was always put off by worries of getting it wrong and ruining perfectly good fish. I’m glad that everyone I talked to about it encouraged me to have a go as it was very worthwhile and definitely rewarding. It was also far easier than I imagined!

Do have a go and let me know how you get on!