Bristolians, it seems, don’t much care for eating out on a Sunday evening. Or perhaps restaurant owners have just decided they don’t fancy opening on Sundays? At any rate, we found that many of the restaurants we had shortlisted for our Sunday evening meal weren’t open. 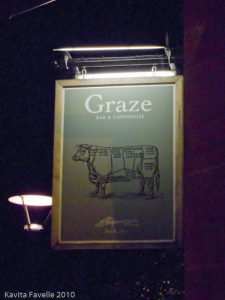 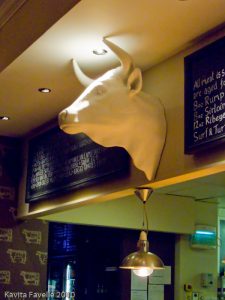 Luckily for us, Bath Ales’ Graze Bar & Chophouse, recommended by my friend Dan, was open and we were mighty glad.

Located on a corner of the lovely Queen Square, now devoid of large carriageway dissecting it, Graze is very centrally located and, on a Sunday at least, we were able to find a parking space only a few paces away. 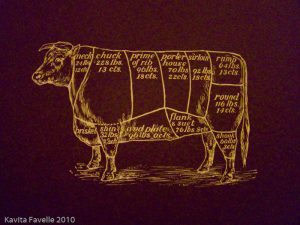 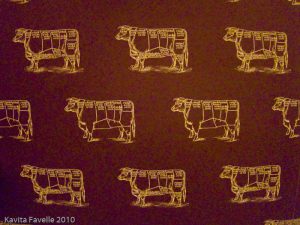 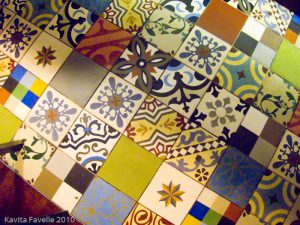 It’s a nice space – a cross between a casual, comfy pub and a relaxed bistro. I particularly liked the open kitchen, the cow head on the wall above, the cuts of cow logo that featured both on the sign outside and on the custom wallpaper and the lovely bright tiles on the floor.

Pete and Matt started with pints of Bath Ales’ SPA. I was cold so I had a hot chocolate. 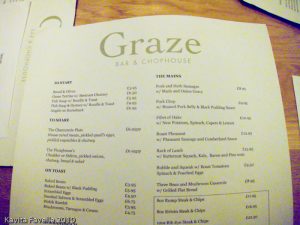 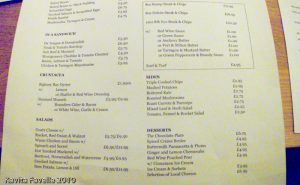 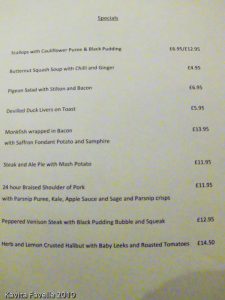 Our waitress, who had only been working in the restaurant three weeks, was really friendly and very helpful as we struggled to choose from the many temptations on the main and specials menus.

Matt and I chose to share two starters, both specials. 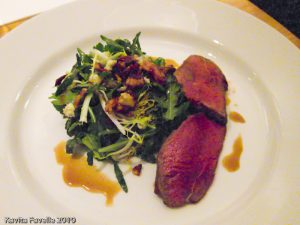 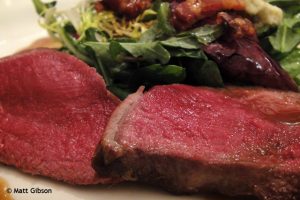 The pigeon salad with Stilton and bacon (£6.95) was delicious. The meat was cooked rare and was tender and dense. The saltiness of both the Stilton and bacon contrasted with the meat nicely. The Stilton also added a lovely creaminess. The whole thing was pulled together with a simple dressing or gravy. 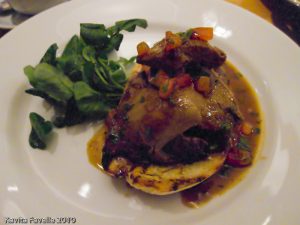 For my money, the devilled duck livers on toast (£5.95) were even better. A generous pile of soft livers, pink inside and with just the right hint of spicing in the sauce, sat on a chargrilled toast. This was absolutely excellent and generous enough for a satisfying weekday lunch. 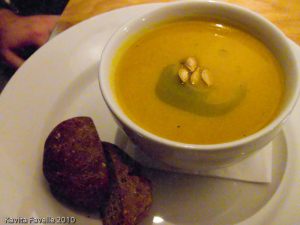 Pete chose the butternut squash soup with chilli and ginger (£4.95) (also from the specials list). Thick, sweet and comforting the chilli and ginger both came through, making it an even more successful winter warmer. It was served with chunks of fresh brown bread. 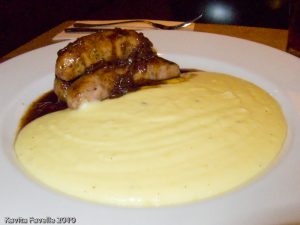 If there are sausages and mash on the menu, Pete finds them hard to resist, and he didn’t resist here. The pork and herb sausages with mash and onion gravy (£8.95) were decent pub grub. Pete liked the almost liquidy mash, though I prefer it a little firmer myself. 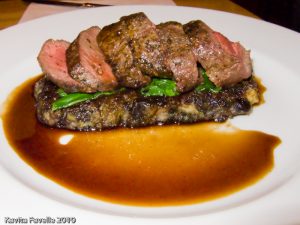 It was hard not to be a little envious of Matt’s peppered venison steak with black pudding bubble and squeak (£12.95). The meat was beautifully cooked and with good flavour. The bubble and squeak worked nicely with it. And the gravy was superbly tasty too. Another winner from the specials menu. 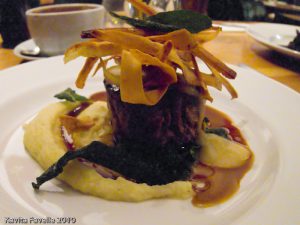 I chose the 24 hour braised shoulder of pork with parsnip puree, kale, apple sauce and sage and parsnip crisps (£11.95) after the waitress helped me decide between this dish and the main menu pork chop with braised pork belly and black pudding sauce (£9.95). I’m sure that would have been tasty too but I was very happy with my choice. The pork had been pulled into pieces and assembled into a cylinder. It was soft, soft, soft! I really liked the sweetness of the parnsip puree and the tartness of the apple sauce. And the parsnip crisps and fried sage leaves were wonderful. And, like Matt’s dish, I had a rich, meaty grave too.

Tempted by the selection of local cheeses (£6.95) I asked our kind waitress to check which cheeses they were. She even wrote them down for me so I could tell you and I’ve gone and lost the piece of paper. And worse still, I didn’t even take a snapshot! So you’ll have to take my word for the fact that I was served four lovely cheeses, a very well chosen selection. 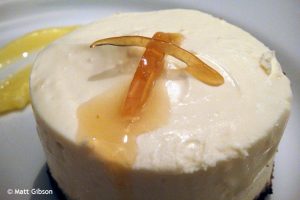 Pete and Matt both ordered the ginger and lemon cheesecake (£4.95). The cheesecake topping was declared fabulous (and the smear of lemon curd too) but neither were very positive about the soft cakey texture of the gingerbread cake used as a base. A cheesecake really benefits from a more solid, crunchy base to contrast with the creamy topping. 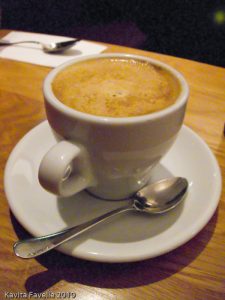 None of us were up to drinking much this evening so our bill came to just £82.75 plus service. Expect it to be a little higher if you have wine or a few more beers during the meal.

We were pretty impressed with the food, especially for the prices and would happily recommend it.