I went there for the bats!

How many times have you heard that given as the reason to visit somewhere? Probably not too often, though I’m not alone. Anyone who loves wildlife spectacles will be thrilled by the sight of thousands and thousands and thousands of bats emerging from their caves at dusk, their tight formation creating a snake-live ribbon of motion across the sky as they head out to feed for the night.

Seeing this daily phenomenon was a key reason I included Khao Yai in our 3 week Thailand itinerary this year. Once I found out about the bats that emerge from their caves as the sun sets, Khao Yai rose to the top of the list! There is plenty of other wildlife to see inside and outside Khao Yai National Park, as well as a range of other attractions in the area, not to mention many more adventurous activities across Thailand.

As we had a rental car, we booked two days accommodation at the Nhapa Khaoyai Resort, an architectural gem less than 10 miles drive from the Northern entrance to Khao Yai National Park.

The car was a godsend for exploring the wider area – we visited local wineries, vibrant local food markets, an organic dairy farm and ice cream store, a chocolatier’s factory with onsite cafe, shop and restaurant, and even a couple of pick-your-own strawberry farms by the roadside. We also giggled at some of the over-the-top themed hotels the area has become known for, replicas of Italian hillside towns and traditional British villages of chocolate-box cottages, fairytale castles and Hobbit-homes, Wild West saloons and a futuristic space station…

To help give us the best chance of seeing both the bats and other wildlife inside the national park, we booked a private one day tour with a local operator, making a special request to leave the park early so that we could make it to the location of the bat caves in time to see the bats emerging.

Inside Khao Yai National Park, we enjoyed multiple sightings of White-handed gibbons (also known as Lar gibbons), which we were able to observe for some time as they gambolled in the trees. Surprisingly, these animals range from pale beige to almost black in colour, so much so that I initially thought they were two different species until our guide put me right. We also spotted three huge Great Hornbills up in the highest reaches of the trees, a Water Monitor lizard basking in the sun by a river, and several plodding Sambar and Barking deer. Had we been able to spend longer in the park, our guide may well have been able to find some of the wild Asian elephants that make their home here too.

Once we left the park, we had a 15 mile drive to the location of the bat caves, about 40 minutes on the road. I was surprised when we parked up to realise that the best viewing spot was a short stretch of dead-end tarmac in the heart of a rural farming area, bush and tree covered hills to one side, fields of crops to the other, and a few scattered farm houses amid the fields. No facilities have (thus far) been built to take advantage of visitors to this natural spectacle, and we shared the ‘bat show’ with a handful of other visitors.

Our guide walked us into a grove of trees, her experience of the wind, weather and bat behaviour predicting that they would first emerge quite low to the ground, passing over our heads, before swinging round by 80-90 degrees, and flying much, much higher off the ground.

We watched the sun set, knowing it wouldn’t be long afterwards that the bats started to exit the caves.

As we waited, two excitable dogs played an energetic game of chase through a wheat field, while swifts swooped and spiralled around us. Predator birds circled above the caves, knowing they could pick off a few of the bats – it’s why the bats exit the caves in big numbers – safety in crowds, the individual chance of a predator catching an individual bat is tiny. 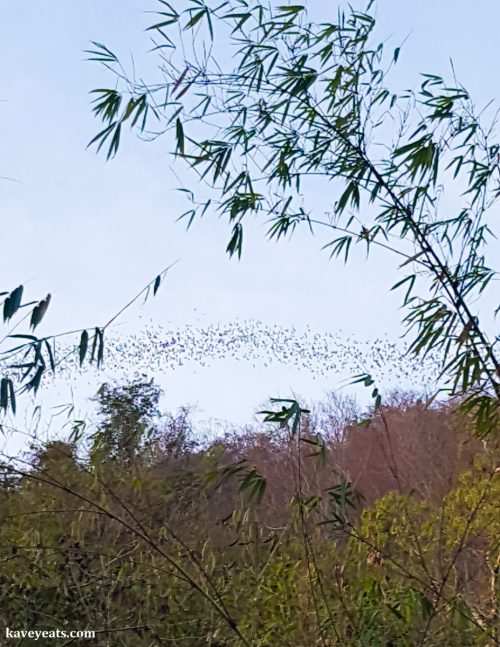 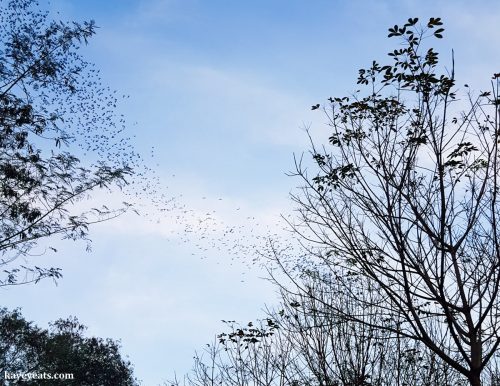 Suddenly it was time, and the first few thousands of bats flew out of the caves. In January, the thick foliage on the hillside obscures the view of the cave openings, so the first you see of the animals is the undulating line against the blue sky.

Our guide was spot on, and we were alone standing right beneath their path. The noise they made sounded like the buzzing of a huge hive of bees. We cupped our ears towards the sound and I couldn’t believe how clearly we could hear the thrumming of their wings, thousands and thousands of them beating the air at high speed as they pelted from the caves. 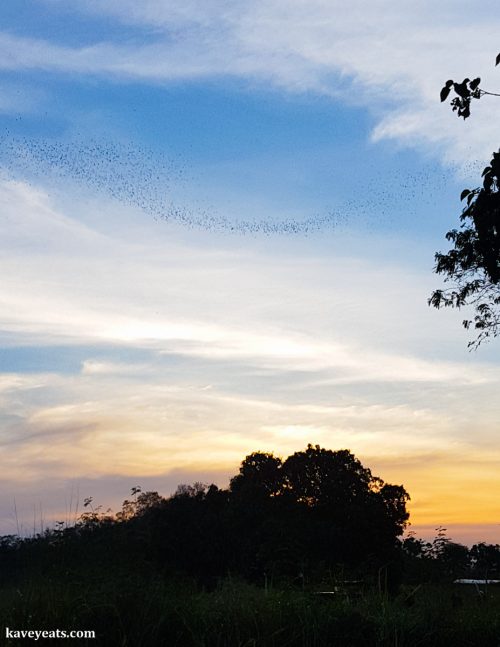 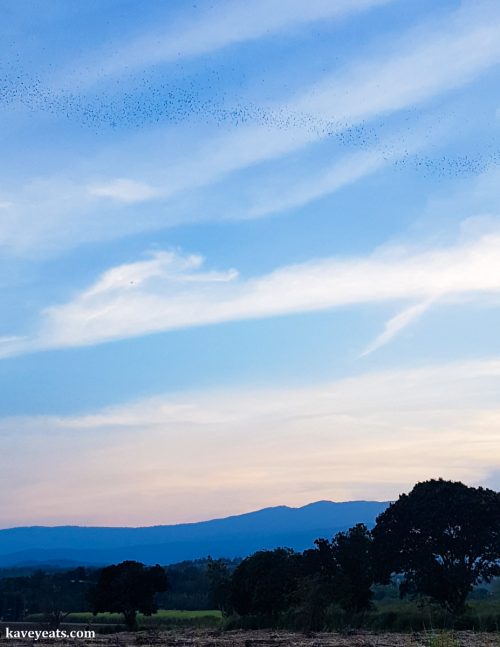 After several minutes, the bats switched direction, almost as one, and the ribbon rose high into the sky. We stood beneath in rapt fascination as time ticked by. Half an hour later, the daily exodus hadn’t slowed, not for a moment. There was still a relentless stream of tiny flying mammals snaking across the sky, out across the landscape to find insects on which to feast.

Our guide said that it continues for well over an hour, sometimes two; she has watched until the sky has gone black and still there are bats coming out of the caves. Hard to even imagine the sheer number of tiny animals that must represent!

How to Find the Bat Caves of Khao Yai

It’s easy to drive in this area of Thailand, so don’t feel you must book a guided tour to see this wonderful wildlife spectacle. You can find the location using Google Maps – navigate to this point.

If you visit on your own, without a guide, make sure you time your visit to arrive just before sunset, and shortly afterwards, the bats will start to exit. 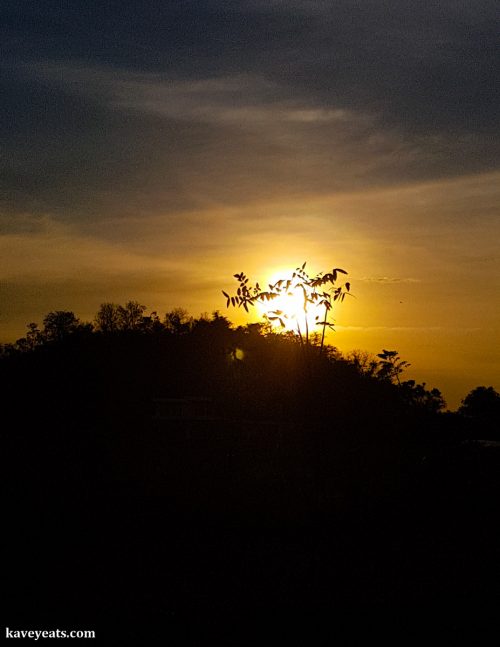 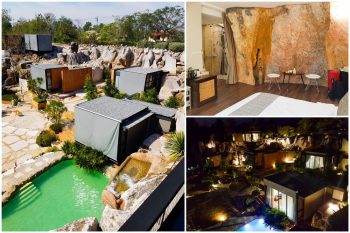 Other Khao Yai Hotels We Shortlisted 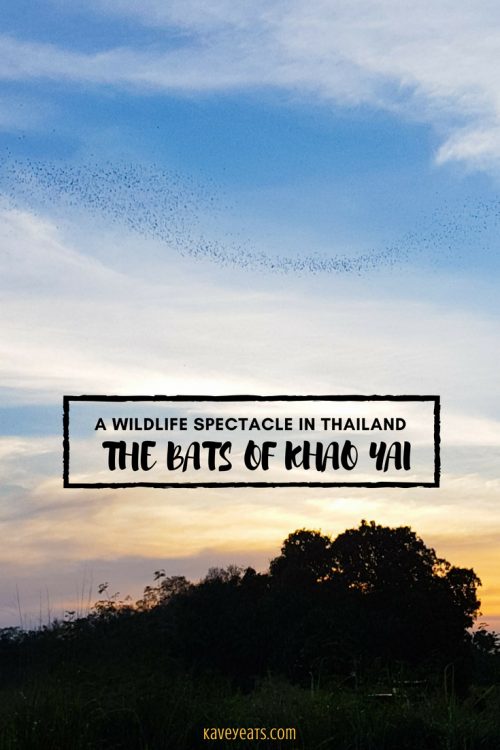 Please leave a comment - I love hearing from you!75 Comments to "A Wildlife Spectacle | The Bat Caves of Khao Yai"