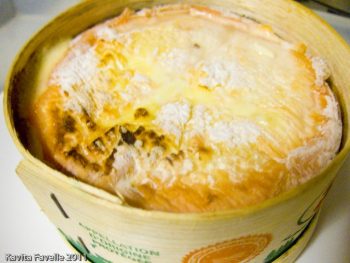 In France, there’s quite a celebration when the season of availability for this fabulous cheese rolls around once again.

Officially known in France as Vacherin du Haut-Doubs this soft, unpasteurised cheese with a pale yellow salt-washed rind originated in the Jura mountains that cross France and Switzerland. French Vacherin, produced in the Franche-Comté region, has AOC (Appellation d’Origine Contrôlée) status – similar to PDO (Protected Designation of Origin) – ensuring that anything sold under this name is made in a specific geographical area according to strictly governed traditional methods.

Vacherin Mont d’Or was born in the 1700s. In the warm spring and summer months, when the cows produced high yields, farmers created a system of collective dairies, allowing them to pool their milk and produce very large wheels of cheese indeed; the enormous Comté and Emmental. However, not only did the cows produce less milk during the winter months, bad weather often closed the perilous mountain routes to the dairies, forcing farmers to make much smaller cheeses at home to use their milk.

The French AOC stipulates unpasteurised milk from Montbeliard cows bred and grazed at an altitude of at least 700 meters above sea level and fed on a diet of grass and hay. It also lays down much of the manufacturing and maturing process including the use of spruce bark to encircle the cheese, which imparts an additional flavour.

(Incidentally, the Swiss Vacherin Mont d’Or, which has a separate AOC, is not the same; one difference being that it’s made only with pasteurised milk.)

It’s probably no surprise to you that I adore this creamy, slightly nutty-tasting, pine-scented cheese!

I’ve bought many, many a Vacherin from my local Waitrose over the last few years (as well as from London cheese mongers), so was happy to accept their offer to send one over when the first of 2011 came into stock. Waitrose source their Vacherin from the Fromagerie Badoz, a family business in the French mountain town of Pontarlier.

Of course, this delicious cheese can absolutely be enjoyed as it is, but it is also very well suited to baking in a hot oven. On this occasion, we followed Henry Harris’ very simple recipe. 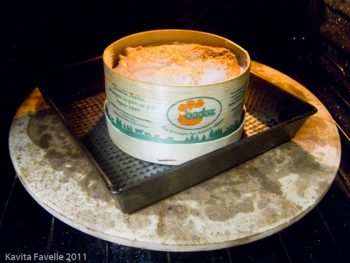 Preheat the oven to 180 C. Leave the cheese in it’s wooden box. Remove the lid, cut a flap in the top of the cheese and pour in a tablespoon of dry white wine. Place the box into an oven dish in case the box collapses. Bake for 15 minutes. 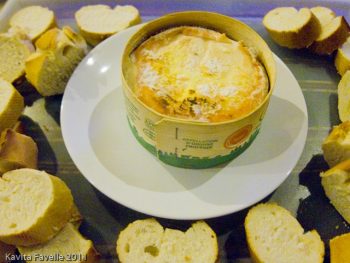 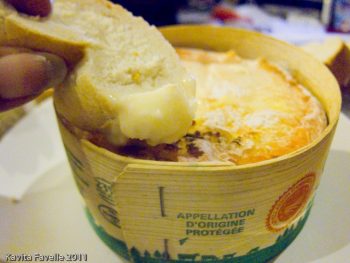 Other recipes call for using a dessert wine instead of dry or adding a clove of garlic or a sprig of rosemary before baking.

Please leave a comment - I love hearing from you!3 Comments to "Baked Vacherin With Crusty Baguette"