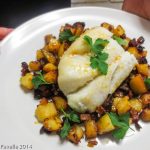 Spanish chorizo can be purchased either as a fresh, soft sausage that requires cooking, or a harder and drier cured version which can be eaten as is. Make sure you buy the soft cooking chorizo. Please leave a comment - I love hearing from you!18 Comments to "Baked Chorizo, Cod & Potatoes"