David Dale had a notion to call this book The Garden of Eden; studying a map as he and co-author Somer Sivrioğlu flew from Istanbul in the west to Gaziantep in the east, he excitedly identified the Euphrates and Tigris rivers (now Firat and Dicle), waxing lyrical about the region “where all the fruits and vegetables in the world originated, and where the forbidden apple was probably a fig”.

Somer was less keen on this romantic biblical reference, and instead they agreed on Anatolia: Adventures in Turkish Cooking to convey “the history and diversity of a land that only started using the term Turkiye (Land of the Turks) in the eleventh century”. They wanted to acknowlege the delicious contributions that Arab, Armenian, Assyrian, Balkan, Greek, Jewish, Kurdish and Romany ethnic and cultural groups in the region had made to the way Turks eat. 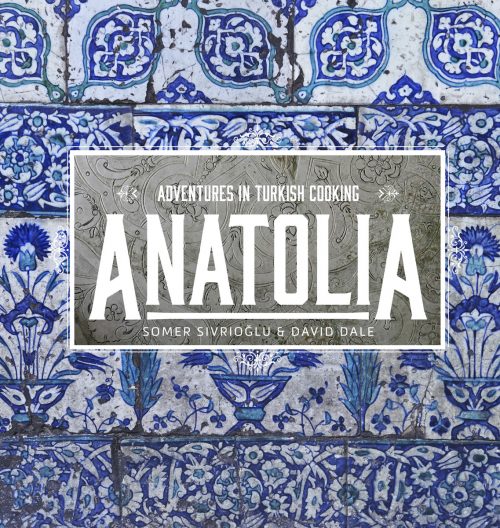 In his preface, Somer acknowledges his debt to Musa Dağdeviren, internationally renowned Turkish chef and producer of Yemek ve Kűltűr (Food and Culture), a monthly Turkish-lanuage publication exploring the history and roots of Turkish dishes, ingredients and cooking techniques. Musa helped Somer to realise that “Turkish cooking is less about particular ingredients and more about philosophy. It’s about sitting at a table in a Black Sea village, sharing a plate of Armenian topik, Kurdish kebap, Jewish boyoz and Greek tarama, and washing down the meal with a glass of rakı or ayran. It’s about the ways different cultures have taken advantage of the abundance of produce in the area now called Anatolia.”

Somer, who grew up in Turkey during the years of military coups and civil unrest , cherishes childhood memories of a community in which “people still shared food with their neighbours; every store in your suburb knew your name; and kids from different ethnic backgrounds not only played together but also ate together in whatever house they found themselves around supper time.” His apartment block “felt like a village, with the hallways full of cooking smells floating from open doorways”. These experiences of multicultural Turkish cooking informed the cooking in Efendy, the restaurant he launched in Sydney two decades later.

That’s where food and travel writer David encountered Somer, and the two agreed to produce a book that would help readers understand the food of Turkey and show them how to recreate classic dishes at home. 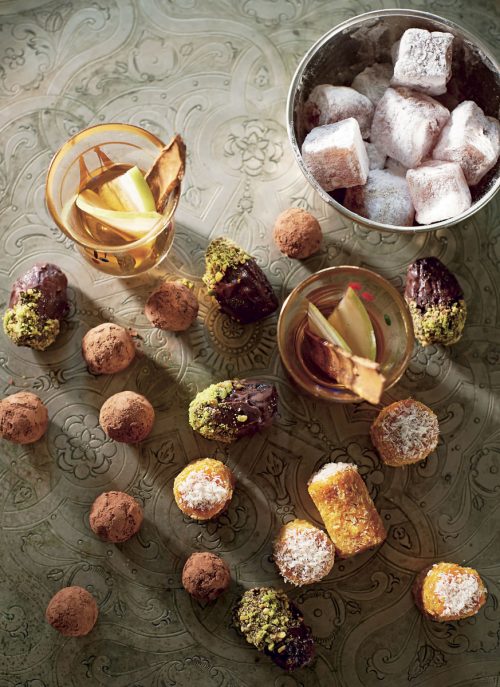 Anatolia is a beautiful book, bound in pretty blue fabric and full of vibrant, eye-catching images of Turkey, its people and its food. First comes a chapter of Essential information – read about a history dating back 5 millennia; understand the geographical regions and their approaches to cooking; familiarise yourself with core ingredients and key kitchen equipment; discover how Anatolian wine may have been the very first in the world; and learn about techniques such as stuffing, baking, drying, pickling and grilling.

The book shares more than 150 recipes, each one prefaced with an engaging tale – the origins of the dish and its place in folklore, an anecdote from Somer or a portrait of a traditional producer. Incor uyatmasi (sleeping figs) is introduced with a poem that provides the backstory to this simple pudding ‘While shepherds watched their flocks by night, all seated on the ground, they also soaked their figs in milk, and then some sleep they found.’ 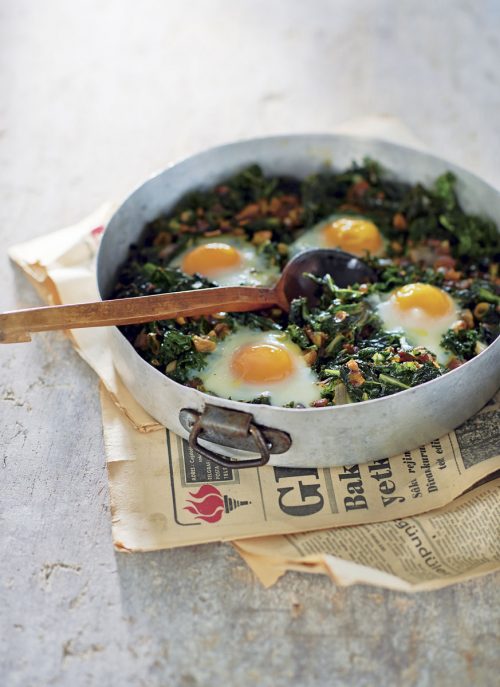 To start the day, try the famous simit pastry– a pretzel-like sesame ring traditionally bought and eaten on the hoof. Or opt for a lavish Turkish breakfast buffet – a spread of olives, cheese, breads and pastries, fruits, honey and jams, and dishes like katmer (a crunchy pistachio pancake), Cretan eggs with wild weeds, and pestil (grape leather stuffed with walnuts). 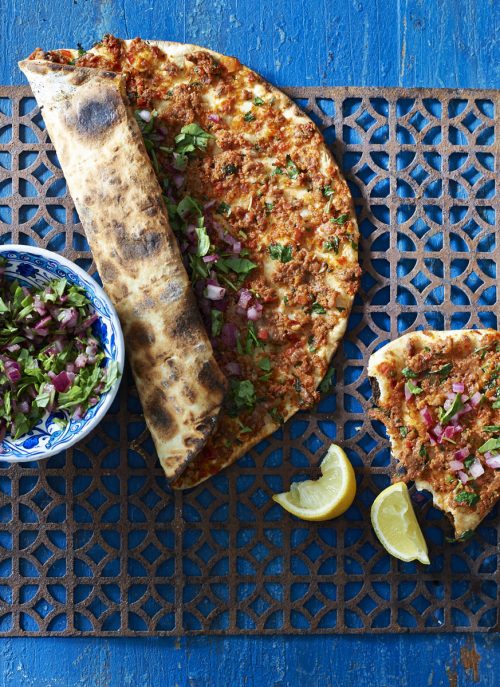 Lunch is often a more casual affair featuring hearty dishes such as anali kizli (dumpling and chickpea stew), lahmacun (a thin flatbread with spicy lamb topping) or a variety of kebabs and sides. 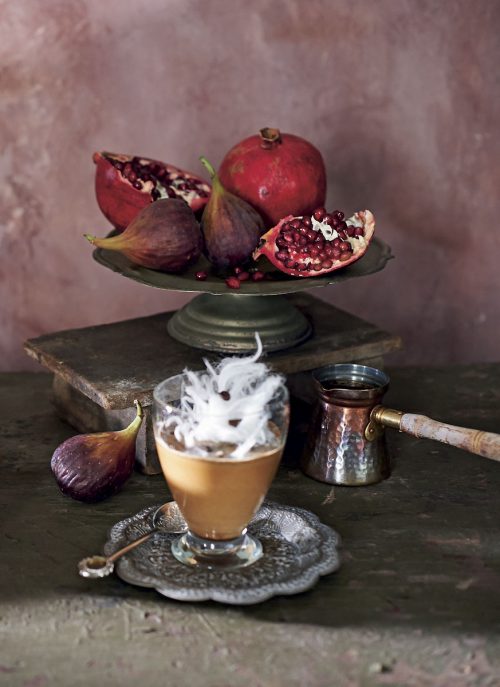 The average Turk has a very sweet tooth, as is evidenced by the treats in the Afternoon tea chapter. Try astarli sütlaç (saffron-layered rice pudding) or kadayıf dolma (apricot and walnut dolmas), washed down with a cup of elma çayi (apple cinnamon tea). 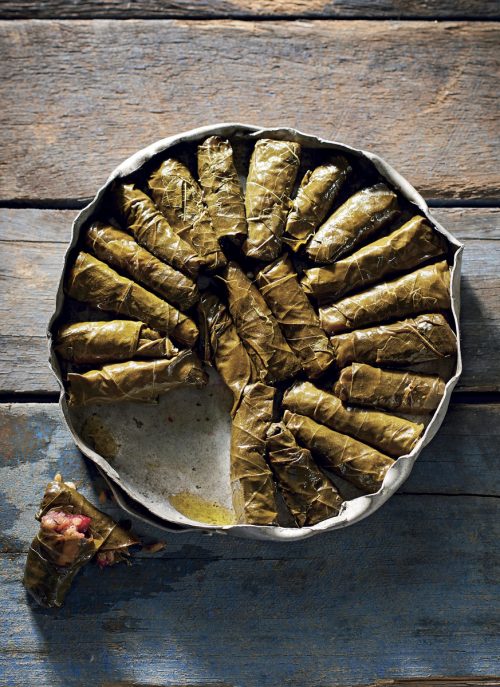 In common with Lebanon and other countries of the Levant, Turkey has a tradition of meze – small tasting plates often enjoyed with friends over a glass of wine or beer. Dishes include fava (broad bean pâté), mercimek köftesi (red lentil meatballs) and yaprak sarma (sour cherry-stuffed vine leaves).

Last comes dinner, the most important meal of the day. Save space for karpuz salatasi (watermelon and feta salad), dil şiş (skewered sole with braised fennel) and elbasan tava (goat and dates in baked yoghurt).

Perfect for those who appreciate an insight into the culinary traditions, culture, ingredients and techniques of a cuisine, Anatolia skilfully weaves a portrait of Turkish culture and cuisine via a mouthwatering selection of traditional and modern recipes adapted for the home cook.