It’s interesting how one book can expose a huge gap in my food knowledge that I didn’t know I had. Amber & Rye is subtitled “A Baltic Food Journey – Estonia · Latvia · Lithuania”, and to my chagrin, I opened it with no idea at all what to expect. Zuza Zak helpfully prefaces the book with a dip into her own family history which has been shaped by the astonishing (and I suspect little known) history of the lands she’s celebrating through their recipes. She’s taken the opportunity to unlock the “Baltic Gold” of food for us, travelling to meet farmers, growers and producers with the help of Mirjam (a dairy farmer and prime mover in the new Baltic food movement ). Zuza uses that journey into the lands familiar from her childhood to produce recipes to reflect those lands today. 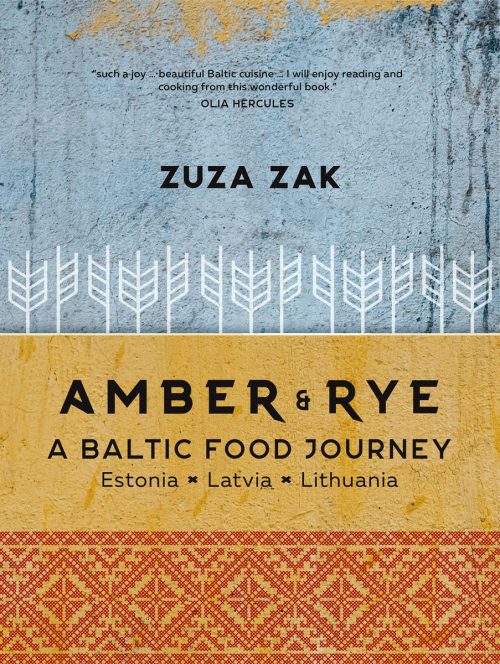 In accord with the post-Soviet modernisation process, there’s a mix of heritage and renaissance in Amber & Rye, the recipes giving a sense of Baltic tastes whilst avoiding getting bogged down in tradition for tradition’s sake. The cover is in a warm and welcoming colourway, with overlaid graphic designs giving a distinctly Eastern European feel. 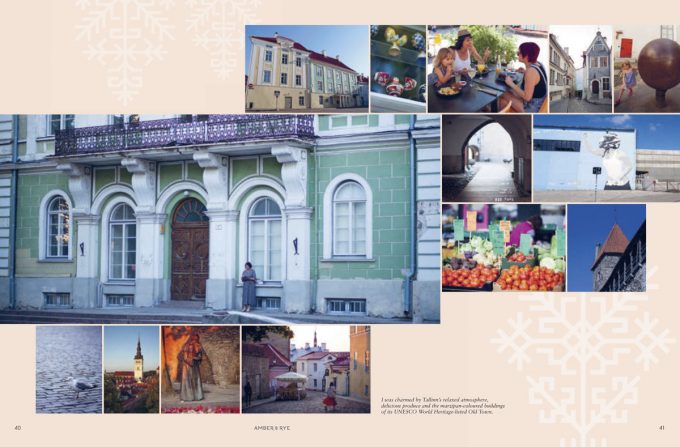 Zuza intersperses chapters of recipes with “pen and picture” portraits of the five main destinations she visited during her research for Amber & Rye and finishes with a short chapter about the Amber Trail, the other Baltic Gold that is found on the beaches of the Baltic Sea. Each of these destinations is captured in evocative text, often as focussed on people as on place, and vividly colourful, sun-drenched photos. The paper stock slightly dulls the impact of the photos throughout – and I’m noticing a theme along those lines at the moment – but the contemporary food illustrations are enticing nonetheless. 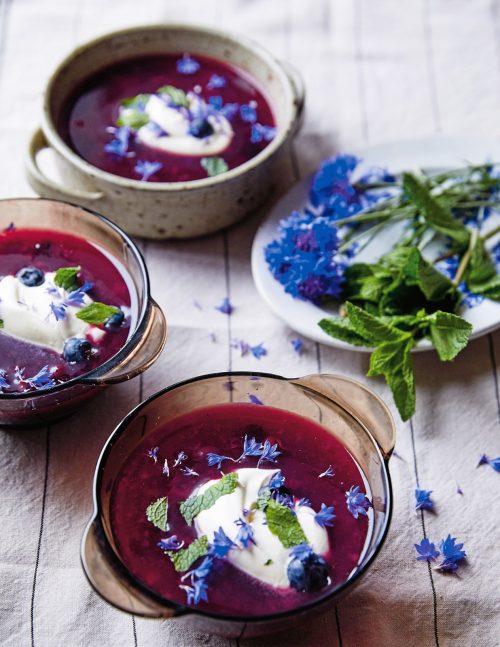 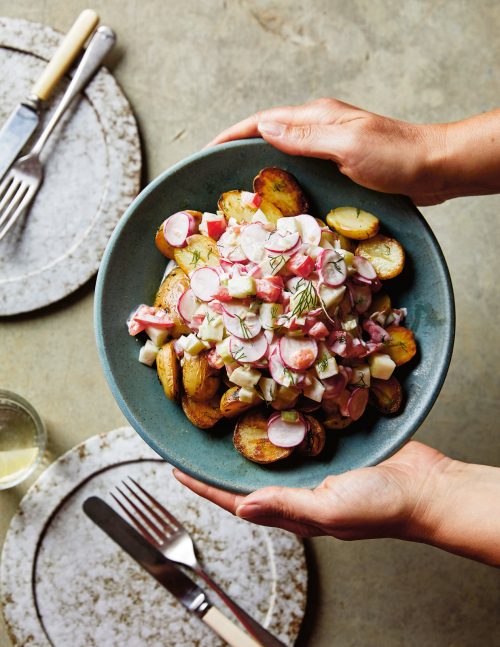 On the practical side, there’s a very handy Ingredients and Stockists chapter at the back of Amber & Rye and a decent, comprehensive index, including ingredient headings (e.g. quark and ramsons) which is always a welcome sight. More common nowadays also, each recipe has both European and US measures. Photos of the dishes are reasonably common, though I’d personally prefer more composite pictures of multiple dishes instead of omitting photographing some recipes in favour of full page illustrations of others.

So, on to the recipes. These are divided into: “Beginnings” (a substantial section on breakfasts in the form of buns, pastries, omelettes, porridge, latkes amongst others); “Starters and Snacks” (breads, terrines, tarts, imaginative fish dishes, sandwiches and more pastries); “Soups” (a mix of predominantly fish and vegetable soups, with a quirky blueberry soup making an interesting appearance); “The Main Event” (a surprisingly compact section covering the gamut of meat, fish and vegetarian recipes that finds time for two different dumpling recipes in its repertoire); “Salads and Sides” (probably the most imaginative and intriguing section, with fascinating combinations as well as a handful of playful slaws); “Ferments, Pickles and Preserves” (the Baltic staple technique of fermentation applied to fruit and veg, but fruit butters, veg purées and cured ham also make an appearance); “Desserts” (a lovely celebration cranberry meringue roulade, poppy seed fudge and rose-scented mini doughnuts stand out) and “Drinks” (everything from kvass to kefir to bellinis and beyond).

With a glut of cheap off-season plums plus a store cupboard rammed full of veg box potatoes languishing, I picked four recipes to tackle my over-stock issues. 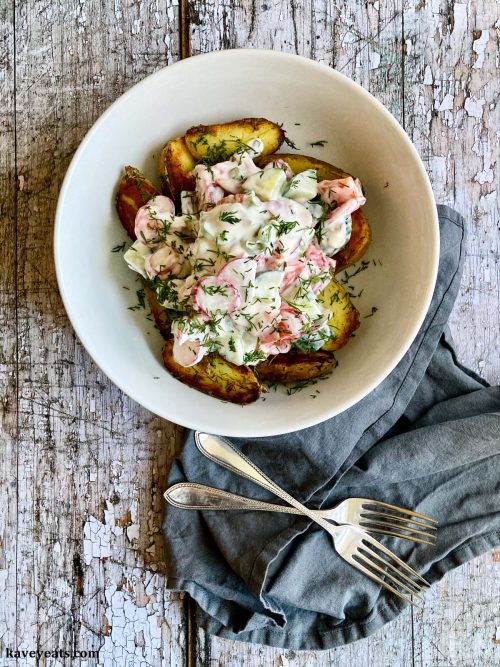 Greta’s Gran’s Potatoes with Kefir and Summer Vegetables is a warm lunch salad – and my first introduction to cooking with kefir (I feel embarrassed admitting to being so far behind this particular vanguard). London-based Lithuanian Greta was the source of this recipe and I’m delighted to inform her and Zuza that I adored this cool/ warm/ crunchy/ soft/ sharp/ smooth combo of 8 ingredients. Kefir was a revelation, basically forming the dressing all on its own and we were scraping the plates so as not to waste any of it. 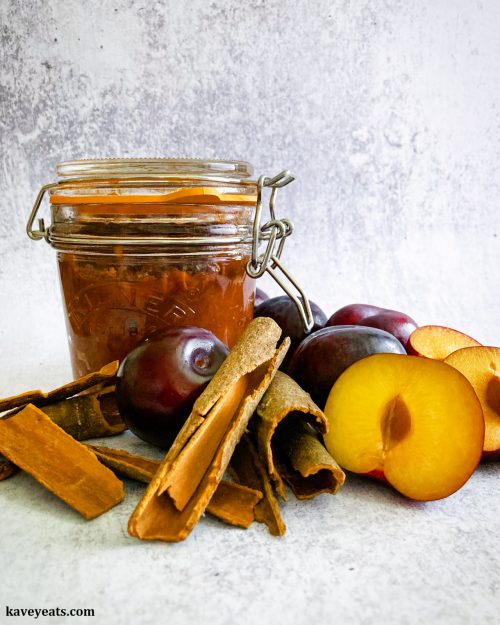 Plum Butter came next, a constant in Zuza’s grandmother’s cupboards. This is a 3 day process to create – not taxing or complicated, but you do need to be prepared to be close to the stove for regular stirring during the several hours of low and slow stewing. I suspect my plums would have benefited from being in season. Less juicy than their autumnal counterparts, they needed an occasional infusion of water to achieve the thick, rich, butter consistency. Now cooled and refrigerated, the slightly sour, sweet, smooth, spiced fruit concentrate has been dolloped on yoghurt, as well as spread on toast and on crumpets. It feels simultaneously luxurious and healthy and it’ll be a perfect way to deal with a future glut. 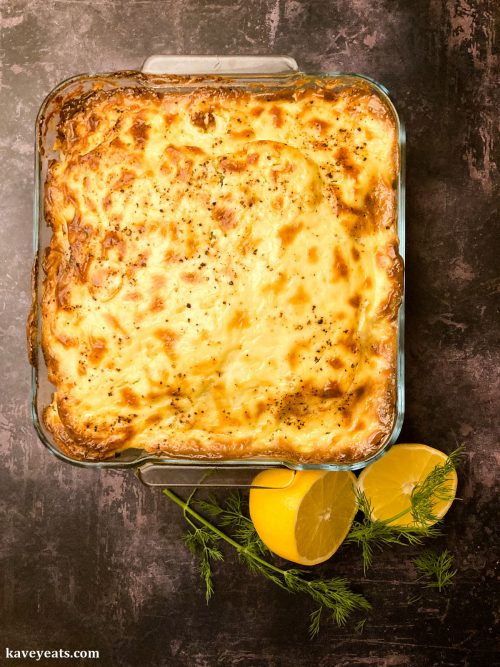 Madara’s Potato, Fennel and ‘Little Fish’ Bake was a less successful experience. Unclear on what type or volume of potato was needed from reading the recipe (“4 large” was as useful as it got), I used all-purpose potatoes. I think I expected something akin to Jansson’s Temptation, that famous Nordic potato and anchovy bake, but I ended up with a lumpen, slightly curdled and separated dish with tough potato slices unincorporated into the sauce. The flavours worked, but the execution wasn’t great. This was one of the recipes suffering from lack of a photo, as I wondered if the ingredients weren’t the issue, but that I’d made it too deep or with too much potato and hence failed to give the potatoes room to cook and melt into the sauce. 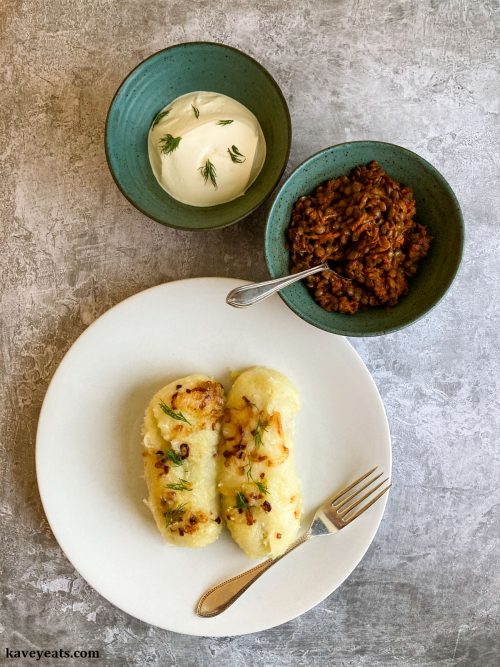 I couldn’t try Baltic cuisine without choosing a dumpling recipe, so I went for vegetarian Cepelinai Potato Dumplings, stuffed with Lentils and Lovage instead of the traditional meat. Again, the potato issue raised its gnarly head – with no idea what type to use, I resorted to all-purpose. As soon as I started adding the cornflour to the dumpling mix, it was pretty clear the potatoes had no hope of holding together into a dumpling wrapper. More cornflour resolved that problem but created a knock-on effect of toughness in the dumpling. The filling was thoroughly delicious and complex but more than twice as much as would fit into the dumplings. It was a recipe that created a large pile of washing up for a dish that was tantalisingly close to being wonderful but just felt slightly disappointing after the time and effort expended.

On my hobby horse now: I do really think that critical recipe testing is vital. I loved the little stories that accompanied each of the recipes, but without someone asking the hard questions (what type of potato, do the plums need to be ripe/in season – e.g. another recipe clearly states “ripe tomatoes”), a recipe that doesn’t really work will never be rescued by knowing about its origin or evolution.

This book is full of lovely, unusual ideas for seasonal recipes employing redcurrants, cranberries, sea buckthorn (with 5 recipes for this alone), wild garlic, herring – and many more – that will probably mean I pull it out to use those ingredients at their peak in a new way, but I will do so a little warily.

That caveat aside, Amber & Rye is a story-telling cookbook for anyone with a desire to satisfy an interest in a part of the world we hear less about than we should, and it introduced me to the delights of kefir and fruit butters, for which I am very grateful.

We are delighted to share these three recipes from the book, with permission from publisher Murdoch Books.

Please leave a comment - I love hearing from you!8 Comments to "Amber & Rye: A Baltic Food Journey by Zuza Zak"