The inspector from the Istituto Parma Qualità moves quickly amongst a selection of legs of ham. He pierces each ham in at least five spots using a special horse bone needle and sniffs the needle after each puncture. The needle is quite specialist; horse bone is porous to just the right degree that it takes in the smell from the piercing, holds it long enough for the inspector to smell it, then dissipates before the next piercing.

A slight, barely perceptible nod from the inspector indicates that a ham has passed. A worker following him lathers the ham with fat to protect it. Then, and only then, the ham is fire-branded with the distinctive Parma ham mark. Parma ham has PDO (Protected Designation of Origin) status, and only products made in the area, to very strict and specific rules, can be labelled as such. 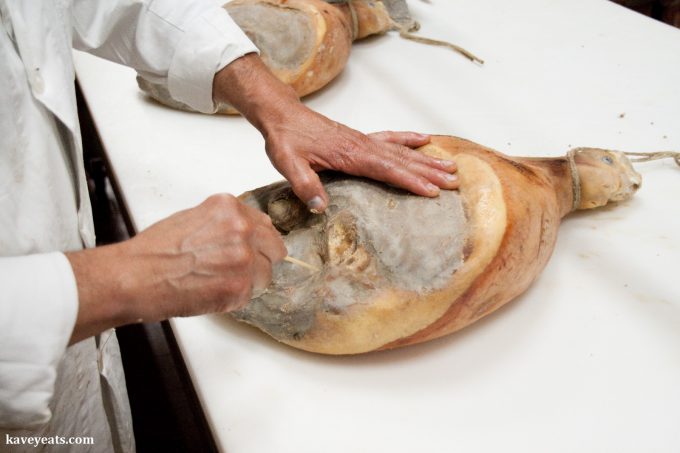 I’m old enough to remember the days when Prosciutto di Parma e melone was a staple on restaurant menus across Britain; a fantail of ripe honeydew draped with soft, pink slices of Parma Ham. Today that simple dish may be considered passé but Parma Ham remains popular with restaurateurs and home cooks alike.

Over many centuries, the cured ham produced in Emilia-Romagna’s Parma province has come to be recognised for its consistently high quality, satiny softness and sweet, delicate flavour. But what makes Parma Ham so sought-after by discerning palates?

Many regions in Italy (and indeed the rest of Europe), cure pork legs to make a style of ham that is not dissimilar. Many are equally delicious but have their distinct textures and tastes that come from localised climates, ingredients and methods. Others, made from inferior pork or using less careful manufacturing processes, are simply not as good. 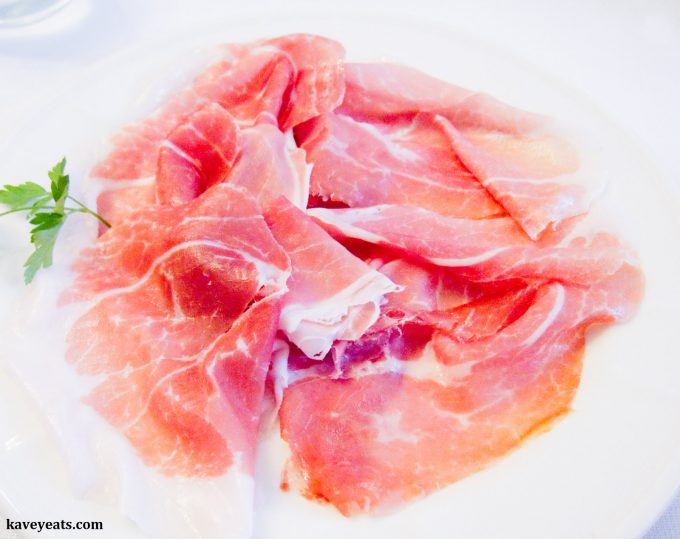 Since it was established in 1963, the Consorzio del Prosciutto di Parma (the Parma Ham Consortium) has safeguarded the genuine product and image of Parma Ham. Now representing nearly 200 members, the consortium governs ingredients, methods of production and quality standards and also markets the brand. Parma Ham was awarded Protected Designation of Origin (PDO) status in 1996. 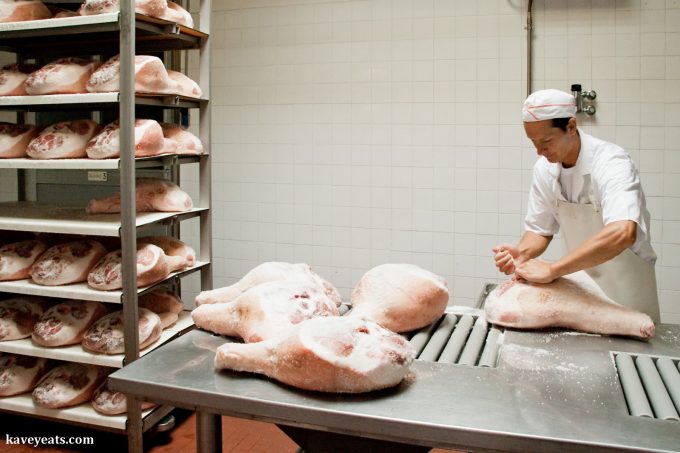 Although the process has been passed down since pre-Roman times, today’s producers cleverly combine technology with traditional methods. Whereas once production was seasonal, modern refrigeration allows perfect conditions to be maintained throughout the year. 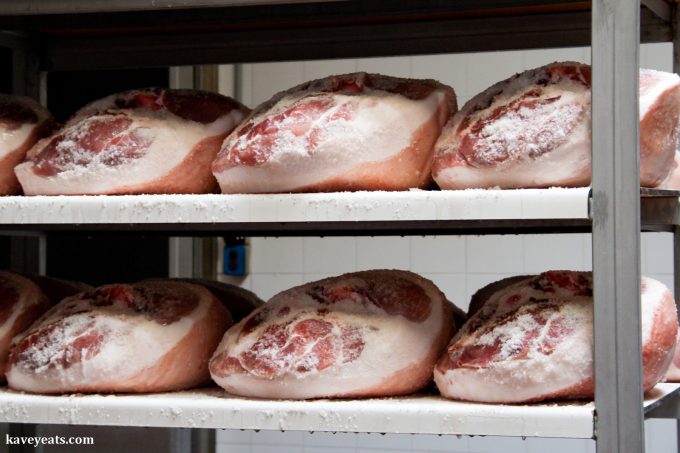 Only pork from selected breeds, born and raised on authorised farms in the region and fed on a diet heavy in maize, barley and whey (a by-product of the local cheese industry) can be used. As soon as the pork legs arrive at the factory, the maestro salatore (master of salt) applies a salt wash before spreading dry salt over the surface of each ham. Over the next few weeks, he checks the hams individually, removing and applying salt to ensure that just enough is absorbed to cure the meat without overwhelming the sweet, natural flavour.

Next the hams are hung for 70 days before being passed through what looks like a giant carwash, to brush and wash the salt off before being hung up once again to dry. 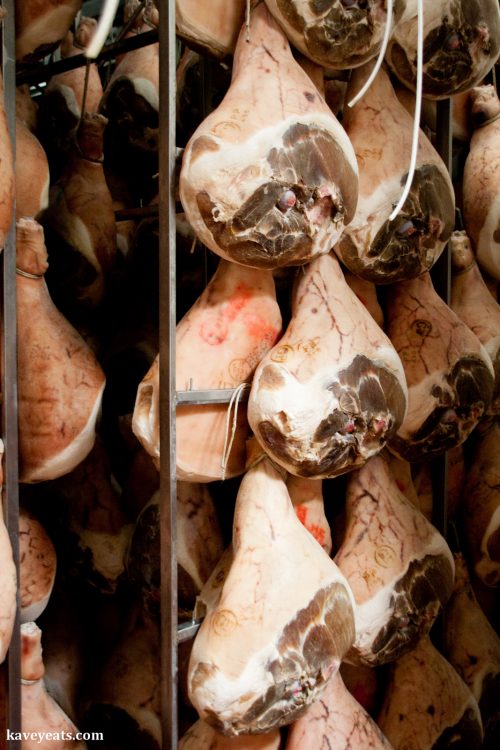 Now comes the initial curing in large ventilated rooms that recreate the cool conditions of open-windowed upper floors of local houses, where hams were traditionally hung to cure over winter. This phase lasts about three months, and by the end of it, the exposed surface of the meat has dried and hardened. 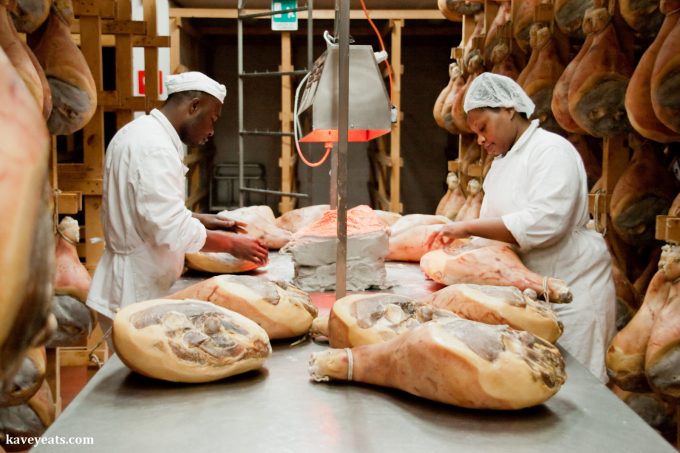 The surface of each ham is then softened and protected with a paste of minced fat, salt and pepper, before the hams are hung for their final curing. They hang for 12 months before the independent Istituto Parma Qualità inspector checks them meticulously – every single ham, one at a time. 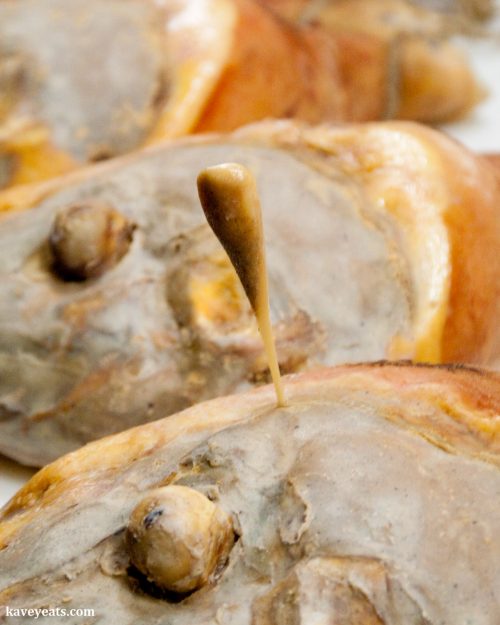 The inspector is quick but thorough; intently focused. Only hams which pass his tests are fire-branded with the Parma Ham Ducal mark, a five-pointed crown. 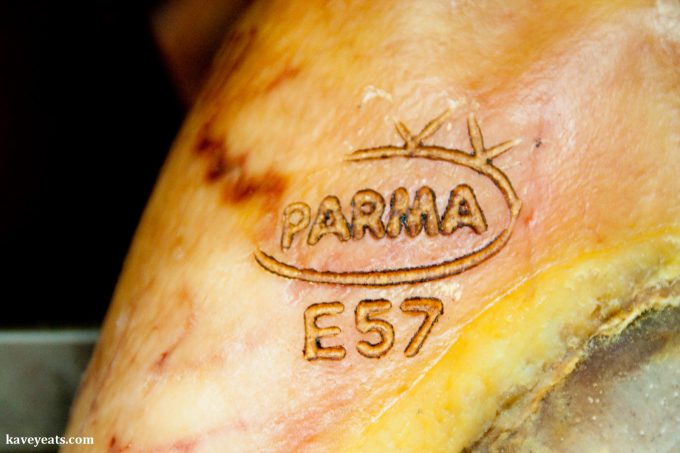 Unsurprisingly, Parma Ham is widely enjoyed in its region of manufacture; traditionally served without adornment as antipasto ahead of the meal to come. Italians also love dishes such as saltimbocca alla Romana in which veal and sage leaves are rolled in slices of ham and cooked in dry white wine.

Today, we use Parma ham in many diverse ways, serving it not only in salads and charcuterie selections but on pizzas and in pastas, as an ingredient in dishes such as quiches and pies, as a topping for waffles and French toast, and in croquettes. 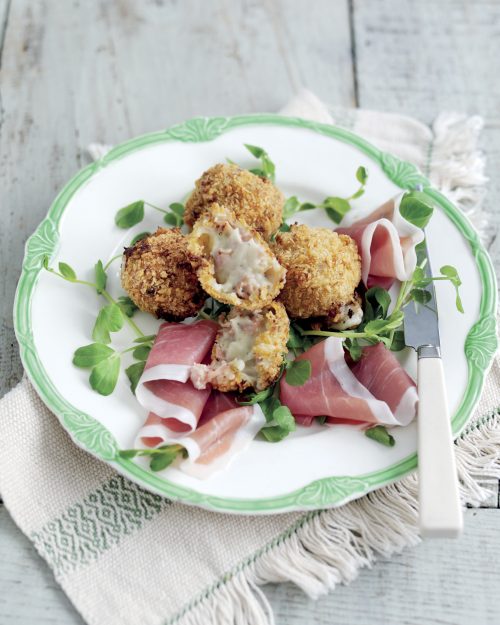 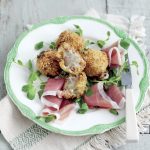 These delicious croquettes are best enjoyed fresh and hot out of the fryer.

Based on a visit organised by a campaign by the Consorzio del Prosciutto di Parma (the Parma Ham Consortium) to discover the origins of Parma Ham. Recipe courtesy of the consortium.

Please leave a comment - I love hearing from you!10 Comments to "A Taste For… Parma Ham"