The method of grinding tea leaves into a powder originated in China during the Song Dynasty (960-1279), but fell out of favour in the centuries to follow. It was not until the practice reached Japan by way of Zen Buddhist monks that it developed into the drink we know today. 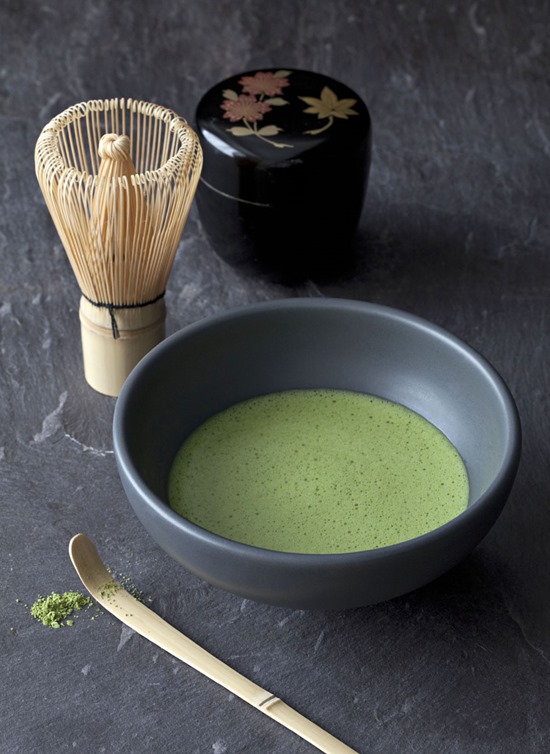 Matcha is traditionally made by stone grinding green leaves of shade-grown tea. Before grinding the leaves are dried, de-veined and de-stemmed, in this state they are known as tencha. Craig Coulton, founder of Bloom Tea, explains that while first harvest yields are much lower than later ones, ‘the quality is superior and makes a smoother and creamier matcha’.

There are two main ways of preparing a cup of matcha to drink. Purists first sieve the matcha to remove clumps. For koicha (thick) matcha place 4 grams (about a teaspoon) into the bowl, top with 40 ml hot water (80 °C is best; boiling water will scald the tea) and whisk. For usucha (thin) matcha use half the amount of matcha and twice as much hot water.

In Japan, a chasen – a specialist whisk made from bamboo – is used to mix the drink. Says Stephen Pereira, founder of Matcha Factory, ‘making matcha with a chasen is part of the experience of matcha and they do look and feel cool. But now that I have kids, I’m all about the speed and convenience of the modern electronic whisks. It’s truly a matter of personal preference.’

Many matcha suppliers sell more than one grade. Lower grades, sometimes sold as cooking or drinking matcha, are often made from late harvest tea and have a less delicate taste. These are ideal for mixing into a smoothie or latte and work well in a variety of recipes. In some cases, ground tea sold as matcha is made from sencha (sun-grown green tea) rather than tencha, but this lacks the distinctive flavour of true matcha.

Jameel Lalani, founder of Lalani & Co reveals what to look for in premium grade matcha such as his Matcha Gold. ‘A good matcha has a deep and bright green colour. The powder should be fine, rising like smoke with a gentle tap. Look for a mellow depth of flavour. Too much bitterness indicates lower quality. A very good matcha has subtle hints of nuttiness and cocoa butter. The texture is thick and the flavour lasts on the palate for many minutes.’

One of the first to sell imported Japanese food and drink in the UK, Tak Tokumine is the founder of the much-loved Japan Centre Group and Shoryu (ramen) restaurants. He agrees that ‘a vivid green colour is important as it suggests freshness and proper preparation of the tencha’. He points out that ‘matcha is delicate and age affects its quality’, which is why he appreciates the freshly ground matcha milled every day in Japan Centre’s Piccadilly store. Tak recommends storing in an airtight container in the fridge, and using within 8 weeks of opening.

Growing tea in shade slows down the growth of the plant, stimulating an increase in chlorophyll levels. This turns the leaves a darker shade of green and causes the production of amino acids, in particular L-Theanine, which not only provides a distinctive umami flavour but is also claimed to reduce stress, sharpen cognitive performance and improve mood (when combined with caffeine).

Tak finds Matcha, ‘the perfect beverage with which to begin the day, as it is relaxing but also gives one clarity of mind’.

After suffering an immune system illness some years ago, Craig found his recovery naturally boosted by antioxidant-rich teas. Whereas for most teas, we infuse and discard the leaves, with matcha the ground up leaves are ingested, providing much higher nutritional benefits. In his collection, Craig blends matcha with other beneficial ingredients such as guarana, peppermint and milk thistle. Varieties with mango and grapefruit appeal to customers who don’t like un-adultured matcha.

For those who aren’t keen on drinking matcha the traditional way, it is wonderful in shakes and smoothies. Craig loves mixing his ginger and ginseng Mindpower Matcha with soy milk and manuka honey. Jameel suggests a breakfast smoothie of matcha, bananas, dates, oats and almond milk. Stephen and Tak extol the virtues of matcha ice cream, the perfect treat on a hot summer’s day.

Please leave a comment - I love hearing from you!32 Comments to "A Taste For… Matcha"