Iceland. What image does it conjure up for you? 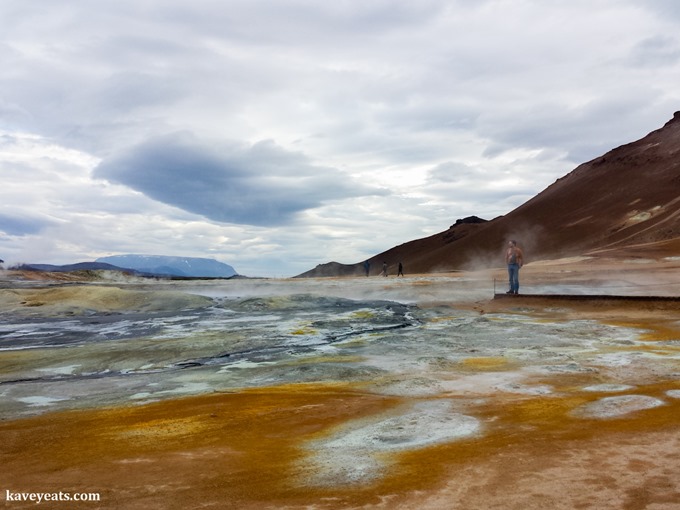 For me it’s a land of a thousand alien landscapes – not just one for every day but one for every hour of your visit. Exploring the island feels like location scouting for the next series of Doctor Who. It’s dramatic, intriguing, enchanting.

If you haven’t visited, it’s easy to fall back on stereotypes: Reykjavik’s enduring reputation as party central; the quirky nature of Icelandic musicians such as Björk; the shocking banking collapse of the noughties; the likelihood of a volcanic eruption (after Eyjafjallajökull in 2010 and Bárðarbunga in 2014); the friendly nature of the people (ranked a couple of years ago by the World Economic Forum as the world’s most welcoming to foreign tourists).

What most first time visitors are missing is an understanding of Icelandic cuisine and the local specialities to look out for and stereotypes come into play again – on learning of my impending visit, friends laughingly asked whether I was prepared for a diet of rotten shark meat and puffin.

Rest assured, there is plenty of great food to appreciate, alongside the more unusual.

Fish and meat are preserved in a number of different ways in Iceland. Fermenting, pickling and drying are common, each one resulting in very different tastes and textures.

Many different types of fish are smoked from cod and haddock to salmon and arctic char. Also look out for smoked cod roe and liver and smoked eel.

Incidentally, don’t be surprised to see a bottle of cod liver oil on many a hotel’s breakfast buffet. In Iceland children are still given a dose daily to boost their Vitamin A and D intake. 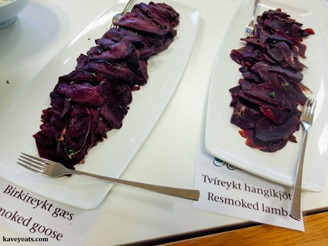 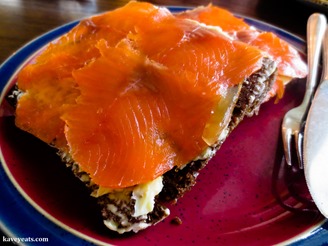 A popular snack in Iceland, white fish – such as cod, haddock, catfish or pollock – is dried and beaten into thin pieces. Traditionally, filleted fish were brined before being hung on outdoor drying racks and wind dried over several weeks. These days, modern temperature and humidity controlled refrigerators are often used.

Widely available in longlife packets, harðfiskur is eaten as it is or with salted butter. The trick, so it’s said, is to allow the hard pieces to soften in your mouth before chewing. 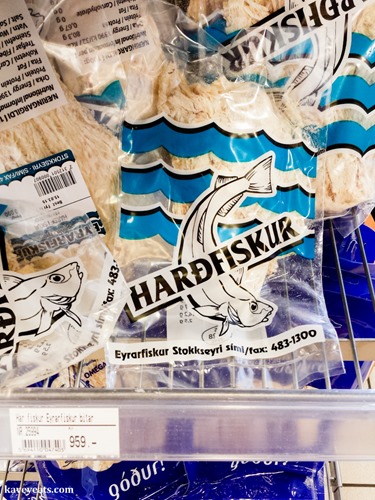 When Icelanders talk about humar (lobster) they’re referring to the European lobster species Nephrops norvegicus, more commonly known as langoustine, scampi, Dublin Bay prawn or Norway lobster. The waters around Iceland are rich in humar; humarsupa (lobster soup) is a popular way to serve it.

In Reykjavik, simple seafood shack Saegreifinn (Sea Baron) is lauded for its lobster soup, a rustic dish of flavourful broth, a few remnants of celery, pepper and tomato and some well-cooked chunks of lobster meat. But the lobster soup I recommend seeking out is an altogether richer version from Fjorubordid, a restaurant in Stokkseyri on Iceland’s south west coast, just 37 miles from Reykjavik.

It’s not just about the soup, though. If you’re a lobster fan, don’t miss out on a big plate of lobster tails, simply served with melted butter and a flavoursome dipping sauce. Fjorubordid‘s offering is a very good option, cooked in spiced garlic butter and served in the pan, with an addictive sweet brown dip on the side. Use your bread to mop up the pan juices. Also worth visiting is Humarhöfnin restaurant in Hofn who grill their langoustine grilled in butter, parsley and garlic and serve with their black magic sauce. 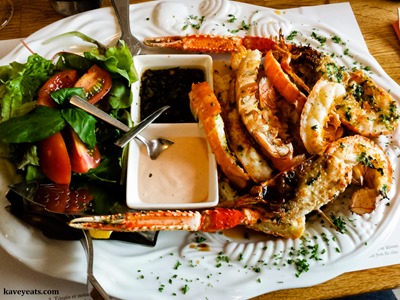 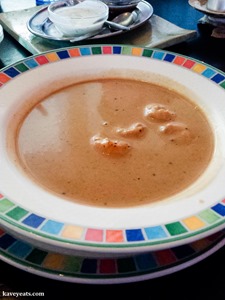 Many meats eaten in Iceland are not widely eaten elsewhere and hence seem rather exotic to visitors.

Reindeer were not introduced to the island until the late 18th century; some still live wild in eastern moorland areas. Reindeer meat is available all year round, but is an expensive delicacy.

Horse meat is commonly eaten in Iceland, enjoyed both fresh and smoked.

Waterfowl such as puffins, cormorants and gulls are rich in fish oil and often soaked or boiled in milk to extract the oil before curing or further cooking.

Probably most controversial is whale meat, which engenders strong emotions for many. Minke whales are not considered endangered and most whale meat consumed in Iceland today is from this species. Read up on the issue ahead of your visit and make up your own mind on whether to try this local speciality.

Other items of interest are unusual cuts of more familiar animals; súrsaðir hrútspungar are boiled, cured and pressed ram testicles; blóðmör is a blood pudding made from lamb’s blood and suet and lifrarpylsa is sheep’s liver sausage. 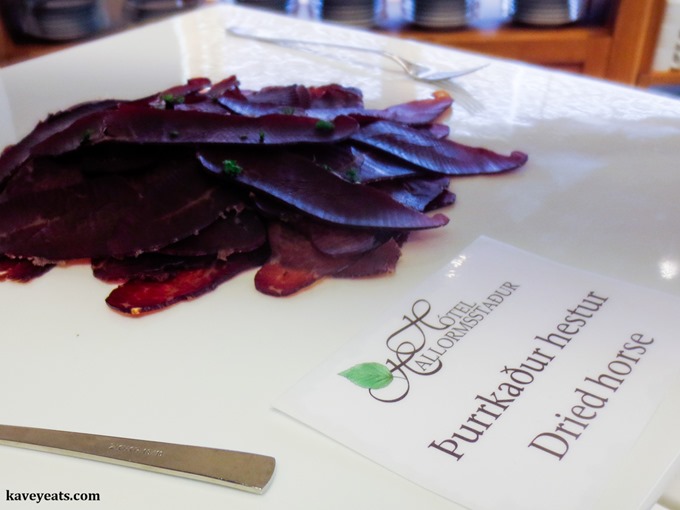 Hverabrauð (hot springs bread) is a traditional dark bread baked using the natural heat of Iceland’s hot springs. A dense rye dough sweetened with molasses is placed in small ovens that are dug into the ground in areas of natural hot spring activity. The geothermal heat and steam surging up through the ground slowly bake the dough over 12 to 24 hours. The finished bread is much like German pumpernickel, but often has a subtle sulphuric taste. Hverabrauð is dense, dark, moist and sweet and particularly good with butter and smoked fish or meat.

The area around Lake Mývatn is very active, geothermically, and known for its local hverabrauð though you can find it across the island. In areas with less volcanic activity, rúgbrauð (rye bread) is slow cooked in a sealed pot.

One word of warning, eating too much of this delicious bread is said to cause flatulence; the reason for its rather mischievous nickname of þrumari (thunder bread)! 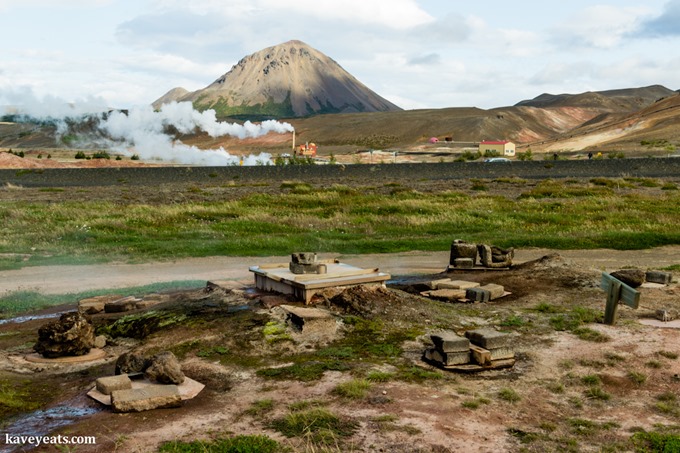 Iceland was settled by immigrants from Scandinavia, an area with a rich tradition of preserving foodstuffs. Abundant fish from the waters around Iceland together with meat from domestic farm animals were preserved during the warmer months for sustenance during the cold and dark winters. In Norway, salt preservation was common but that tradition didn’t last long in Iceland; a shortage of firewood precluded the quick creation of salt by boiling seawater over fire. Instead, Icelanders preserved meat by fermenting it in whey, an acidic by-product of the cheese industry.

Fermentation not only preserves the fish and meat but has a strong impact on the taste of the food, creating a strong umami-rich flavour. Of Iceland’s fermented fish and meat products, kæstur hákarl aka ‘rotten’ shark is probably the best known and the most feared.

You can find it in local supermarkets, and on a few restaurant menus. But be warned – food writer and blogger MiMi Aye deems it ‘the worse thing [she’s] ever had in her mouth’ and eloquently describes her throat contorting and constricting ‘in a desperate attempt to regurgitate the chunks of fetid fish’. 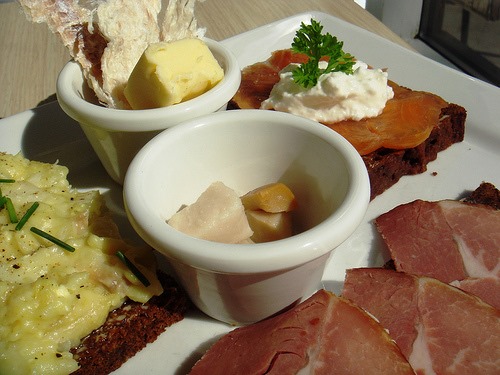 The cubes in this Image by MiMi Aye

The original Norse and Viking settlers of Iceland brought with them cattle, pigs, goats, horses and sheep. Most of these stocks developed in isolation on the island and today, the local breeds provide superb meat and dairy products.

Icelandic lamb in particular is excellent. Modern restaurants serve delicious lamb steaks, grilled and served plainly to show off the quality and flavour. Also popular, especially in colder months, is kjötsúpa which can be either a lamb soup or a stew, depending on how much the liquid is thickened.

When it comes to sweet shop favourites, it won’t take you long to notice that Iceland has a bit of a liquorice fetish. Pop into any supermarket, grocery store or petrol station shop and you’ll find shelf after shelf of different liquorice treats from familiar liquorice shoelaces, wheels and whips to liquorice toffee and chewing gum, liquorice foam octopuses and even liquorice flavoured chocolate bars.

Marzipan is also a much loved sweet, featuring in chocolate bars, cakes and biscuits.

For the ultimate Icelandic confectionery experience, track down a bar of Nóa Tromp – milk-chocolate covered liquorice filled with a sweet marzipan and coconut cream.

An Icelandic pylsa is much like a hotdog anywhere in the world – frankfurter sausage, white bun and condiments – but it’s the condiments of choice that make it a little different. Order your hotdog með öllu (with everything) and you’ll get a double dose of onions – crispy fried ones and finely diced crunchy raw onion, both scattered generously underneath the frankfurter. On top of the sausage, vendors squirt zigzags of ketchup and mustard plus a third condiment that is more of a surprise: remúlaði. Remoulade is a mayonnaise-based sauce most commonly served with fish but in Iceland it’s become a key hotdog condiment as well.

The most famous hotdog vendor in Iceland is Baejarins Beztu Pylsur, sold out of two mobile vans in Reykjavik but you’ll also find delicious hotdogs sold by fast food joints and petrol stations around the country. 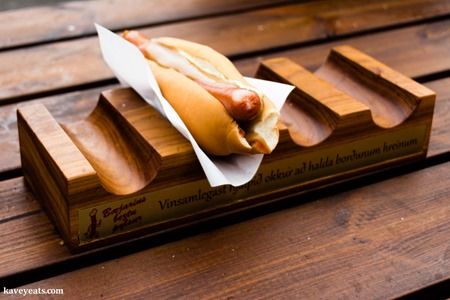 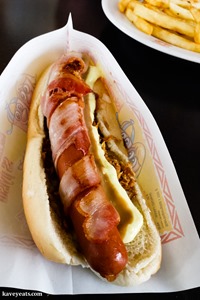 Similar in taste and texture to natural yoghurt, skyr is a cultured dairy product that has been made in Iceland for over a thousand years. It is essentially a fresh cheese; a small portion of the previous batch of skyr is added to warm skimmed milk to introduce the required bacteria, rennet is sometimes added too and the mixture is left to one side; once the milk has coagulated, it is strained through fabric to separate the solids from the whey. Like yoghurt, skyr has a slightly sour tang.

Traditionally, it is served with milk and sugar or stirred into porridge but today commercial brands sell flavours such as vanilla, berries and other fruits alongside the plain variety. It also features in local desserts such as cakes, pastries and mousses. 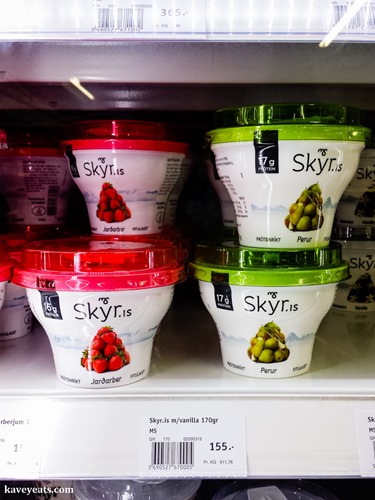 Only for the brave, Svið is half a sheep’s head, singed to remove the fur, boiled and served rather starkly on the plate. Sometimes the meat from the head is removed, formed into sviðasulta (a pressed terrine of brawn) and pickled in whey.

This austere dish arose during a time when no part of a slaughtered animal could be wasted. These days, Svið is one of the key dishes in þorramatur, a buffet of traditional foods, often served during the mid-winter festival of Þorrablót. Sviðasulta is more widely eaten throughout the year. 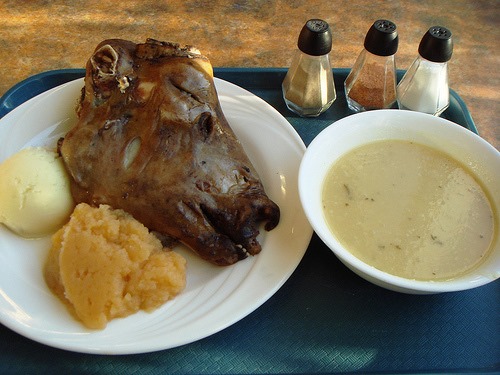 Thanks to MiMi Aye for her contributions.

Please leave a comment - I love hearing from you!77 Comments to "The Kavey Eats Guide to Icelandic Food"