Today we are sharing another recipe from Meze: Snacks, Small Plates and Street Food from the Middle East, by Sally Butcher, one that hails from her mother-in-law Afi. A minced lamb casing is wrapped around two different fillings, one being whole eggs, carrots and herbs, and the other a mix of spinach, walnuts and dried fruit. These are lightly floured and fried to seal, before being baked in a saucy coat of tomato paste, lemon juice and chicken stock. 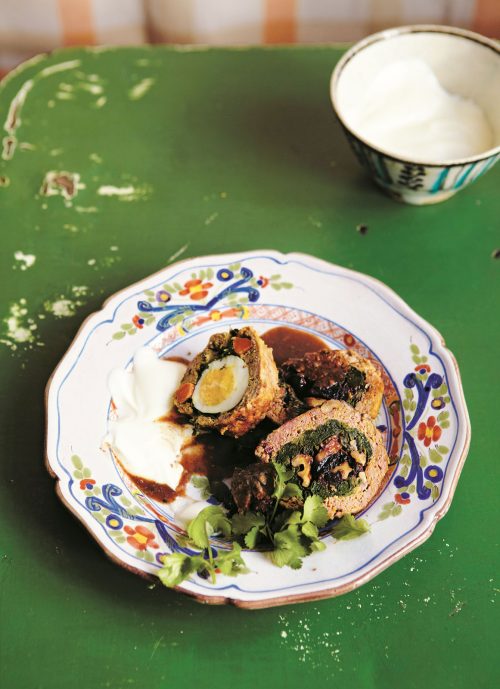 By now, we hope you’ve read our cookbook review of Meze and bookmarked yesterday’s recipe for Aubergine-Wrapped Chicken? 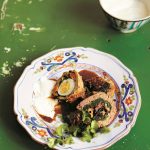 Afi is my mother-in-law. She’s over 70 now, but looks a good 20 years younger, and rules her little Peckham/Persian roost with tenacity, generosity, humour and a rod of iron. We get on famously, and in this I am very lucky, because Iranian mothers-in-law are notoriously pernickety, worthy of every mother-in-law joke in the book and worse. Afi has been cooking this dish for many years and has made it quite her own, but I think it was originally based on a recipe by Roza Montazemi and the name indicates French origins (Iran has a history of trading with the French dating back to the sixteenth-century Safavid empire). It is one of the few dishes that my father-in-law will agree to eat without a mountain of rice on the side: it’s usually enjoyed with bread, yogurt and fresh herbs.
Author Sally Butcher

Recipe extracted from Meze: Snacks, Small Plates and Street Food from the Middle East, by Sally Butcher with permission from publisher Pavilion Books. Image credit to Yuki Sugiura. Currently available from Amazon UK (at time of publishing) for £9.56 (RRP £12.99).