We enjoyed a wonderful three weeks in Thailand last year, and since then we’ve been more interested in Thai cuisine than ever. Recently published cookbook, Baan: Recipes and Stories from my Thai Home by Kay Plunkett-Hogge, is making us salivate for all the delicious Thai recipes. Read my review of the book here.

With permission from publisher Pavilion Books, we are so excited to share three recipes extracted from the book. We’ve already shared the first, a delicious party snack called Ma Hor (Galloping Horses). 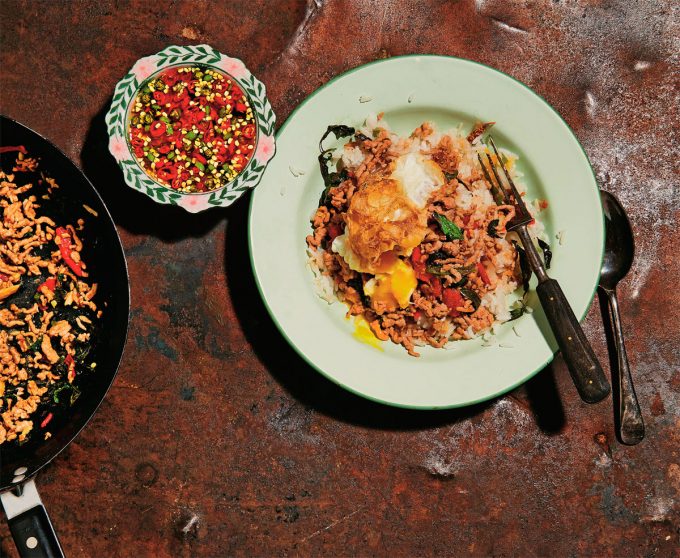 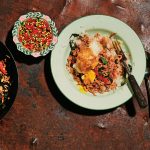 This is one of my favourite things to eat in the world, especially when served lart khao kai dao, as a one-dish meal over rice with a deep-fried egg to top it off. It is one of the first Thai recipes I learned to cook. Even so, I wasn’t surprised to receive a text from David Thompson when he read my version, that said: ‘Beans?! Beans!! If you were here now…’

This is something of a running joke between us, because – like many chefs – David is a purist, and rightly revered for his knowledge of Thai food. He was referring to a version of pad krapow made solely with nam pla. No soy and certainly no green beans. And he is both right and wrong.

There are no Larousse-like standard recipe texts in Thai cooking. Instead, as with Italian food, there’s enormous variation not only regionally but from cook to cook. And nowhere is this better demonstrated than with pad krapow.

I picked up the offending version from a road-side cook in Kanchanaburi. I like the deep savoury qualities given by the soy and the texture of the green beans. I also like the ‘pure’ fish sauce version David and I like to argue about.

I most frequently make this with pork, but you can use beef, chicken, prawns (shrimp), duck, tofu, mushrooms, you name it. You can even use the Moo Grop (pork belly).

And, while you really should finely chop up the meat yourself, when I make this for my lunch, I just buy minced (ground) pork from the supermarket!

If you can’t find holy basil (bai krapow), you can use Thai sweet basil instead. Worst-case scenario, I have even made this with regular basil – but it isn’t quite the same. If you do, just don’t call it Pad Krapow.

[Kavita] The second version of the recipe replaces the two soy sauces with 3 tbsp of fish sauce (nam pla), and omits the green beans. Having made the recipe several times, we now make a hybrid version with both soy sauce and fish sauce.