When cooks from the Indian subcontinent talk of garam masala, they talk of whole or ground.

In his seminal and encyclopaedic book, McGee on Food and Cooking, Harold McGee explains that a greater surface area (from cracking or grinding spices) allows flavour molecules to escape more rapidly into the dish. This is why whole spices can be added at early stages of cooking, giving them plenty of time to release their flavours slowly, whereas supplemental spicing, added at the end of cooking, is best ground.

Chef proprietor of successful restaurant Café Spice Namasté, author of several Indian cookery books and celebrity television presenter, Cyrus Todiwala OBE DL shares his thoughts, ‘whole garam masala should always be delicate and fragrant; ground garam masala, if used incorrectly, can alter the flavour and taste profile of a dish beyond repair’. He adds that garam masala is not a ‘fix for all seasons’, in a gentle admonishment to those who add it where it doesn’t belong.

My mum Mamta Gupta, the home cook behind mamtaskitchen.com, has been sharing Indian recipes and cooking tips online for 15 years. She explains ‘although garam means hot, this masala (spice mixture) doesn’t include chilli; the warmth comes from black peppercorns’.

Her standard garam masala recipe consists of black peppercorns, cloves, cardamoms, cinnamon or cassia bark and bay leaves. Although she will occasionally add cumin, nutmeg, or mace, she prefers not to include too many spices in her basic blend; ‘some people add star anise and fennel – I’ve even seen pomegranate seeds added. But I prefer to store them separately and add them individually to specific dishes.’

Both Cyrus and Mamta warn that cheaper ready-made garam masalas are often bulked up with cumin and coriander seeds, as both are less expensive than the core spices both recommend. Yet another reason to make your own, and in small quantities so that the flavours don’t fade before use.

Indeed, Cyrus is keen to remind us ‘we all have different palates’ and that all of us smell and taste differently – ‘you make your own recipe as you go along, with trial and error – use your imagination!’ Although he talks through his most common garam masala ingredients (green cardamom, black cardamom, cloves, cinnamon or cassia bark, star anise, nutmeg or mace, black peppercorns and cumin), he also advises you to skip an ingredient if you can’t get hold of it and ‘don’t waste your time thinking you will not get a good masala’.

The biggest debate concerning garam masala is whether or not to roast the spices before grinding – as with much of Indian cooking, there is no one right or wrong answer. As Cyrus points out, ‘ground garam masala has a million recipes I should think, and a million thoughts towards it.’

Like her mother and grandmother before her, Mamta seldom roasts her garam masala spices prior to grinding as she feels that ‘the flavour is released and then lost before using’. She likes to make garam masala in small batches, so it’s still fresh when used and then ‘sprinkle it on top of the cooked dish while still hot, close the lid and let the flavours infuse’.

Cyrus, on the other hand, advocates careful roasting in a clean oven, free of smelly fat deposits. He bakes his whole spices on a tray for 20 to 30 minutes at gradually decreasing temperatures from 160°C down to 120°C. Once they are completely cooled, he grinds and sieves before storing the finished garam masala in a clean jar. To use, he suggests adding just half a teaspoon at a time, tasting and adding more if desired.

‘At the end of the day’ says Mamta, ‘there are no rigid rules for garam masala. Do what suits you and the recipe best.’ 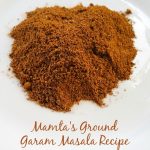 Reproduced from MamtasKitchen.com, with permission

Garam masala is used to add flavour to many Indian dishes. Mum’s recipe is based on how she saw her mother making it; the choice of spices and amounts of each spice vary from family to family. This version is quite strong so use only a little at a time; mum’s recipes usually specify less garam masala than is generally recommended because hers is quite intense and fresh. As spices lose some of their most volatile flavour molecules on grinding, it is better to make small amounts at a time, use within a few weeks, and make more as needed. As it is often cheaper to buy larger bags of whole spices, these can be stored in the freezer to retain freshness. Please leave a comment - I love hearing from you!31 Comments to "A Taste For… Garam Masala"