Luiz Hara aka The London Foodie was one of the first fellow bloggers I met shortly after launching Kavey Eats in spring 2009. I can no longer remember how we met but I do know that we built a friendship on that most important of bases – food!

Born in Brazil to Brazilian-Japanese parents, Luiz moved to London at the age of 19, fully intending to return to Brazil once his studies were completed. But fate intervened, he met his partner and settled down in the UK instead. His family background gives him an amazing range of cuisines to draw from in his cooking. I went to some of his earliest Japanese supperclubs which were a delight, and also loved his Cooking Club, during which each guest took a turn to cook a dish to the evening’s theme, creating a multi-course extravaganza.

I remember when Luiz decided to leave behind the world of finance and dedicate himself wholeheartedly to food, kicking off with a diploma course at the Cordon Bleu cooking school and including a stint learning more about traditional Japanese cooking in Tokyo.

His supperclub has continued apace to become one of London’s best; places are highly sought after and sell out within moments of going on sale. Although the food is predominantly home-style Japanese, Luiz regularly adds touches of South American influence, not to mention techniques from classic French cuisine, providing a feast of dishes you would be hard-pushed to find anywhere else in London. The good news is that his first cookbook, Nikkei Cuisine: Japanese Food the South American Way, shares many of the recipes he has developed and perfected over the last few years.

In Luiz’ own words:

At its simplest, Nikkei cuisine is the cooking of the Japanese diaspora. When my family and millions of other Japanese people migrated to South America at the start of the 20th century, they recreated their native cuisine using local ingredients. This style of Japanese cooking is known today as Nikkei Cuisine. For historical reasons, Nikkei cuisine is mostly associated with Peru and Brazil (where I was born).

The book is his personal collection of over 100 recipes and includes family favourites and contributions from Japanese and Nikkei chefs he met during research trips, as well as the many recipes Luiz has developed himself.

Recipes are divided into chapters for Small Eats; Sushi, Tiraditos & Ceviches (a chapter which really brings home the parallels between the South American and Japanese approach to raw fish); Rice & Noodles; Soups & Hotpots; Mains; Vegetables, Salads and Tofu and Desserts. There is also a chapter on mastering the basics of Sauces, Marinades & Condiments.

Photographs are colourful and appealing, with handy step-by-step illustrations for trickier techniques such as Japanese rolled omelette and Maki (sushi) rolls.

The good news is that I have two copies of Nikkei to give away. Scroll down for the chance to win this beautiful book. 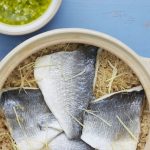 Tai gohan (sea-bream rice) is a classic of Japanese home cooking and is a dish I have always loved. It can be made in a rice cooker or in a clay pot or elegant pan to be served at the table for added wow. The fish is cooked over the rice, imparting a delicious flavour to the dish. Here I give my Nikkei interpretation, by adding a dressing of olive oil, yuzu juice and jalapeño green chillies, mixed into the rice just before serving. It’s like traditional Japan embracing the spice of South America.

Cooked in a Clay Pot

For the yuku & green jalapeño dressing