When I set September’s BSFIC theme as Spices I thought people would find it easy to think of ideas. Not only is vanilla the queen of ice cream spices, there’s also anise, cardamom, chilli, cinnamon, ginger, mustard, paprika, pepper and saffron, to name just a few!

People said they found it hard to decide what to make, yet every entry looks delicious! My own entry for the challenge was this delicioius Sichuan Pepper Ice Cream which I made with the help of my friend Monica during a weekend visit to her beautiful rural cottage. Having taken along a jar of my homemade candied clementines, I wanted to make an ice cream that would complement them well. Sichuan is part of the citrus family, and when you infuse it in custard, it releases a wonderful and unique citrus flavour. It was really wonderful and one I’d definitely make again. Laura, author of How To Cook Good Food, loves spices so much she found it hard to decide which ones to use. In the end, a supermarket punnet of plums helped her settle on her final recipe, a Roasted Plum, Strawberry & Five Spice Ice Cream. It’s a great one for those who don’t like making custard as it involves pureeing the fruit and combining with cream before churning. Alicia aka Foodycat says ice cream is her favourite dessert. Judging by her Triple Ginger & Nectarine Ice Cream I can see why! She used an egg, mascarpone and cream base that she’s already discovers gives a very rich finish, not too sweet and with a lovely texture. Keen to combine ginger and seasonal fruit, she decided on nectarines when she found some beautiful white ones on sale. The ginger comes in the form of ground ginger, crystallised ginger and King’s Ginger Liqueur. The Little Loaf blog is well known for making readers salivate and Kate has done it again with her latest post. To go with her sticky cider pecan cakes, she made some Cinnamon Ice Cream (and a salted caramel sauce). Her aim was to lift the cupcake from a clichéd little cake covered in “teeth-itchingly sweet icing”. I think she definitely succeeded! This is Maria’s first entry into BSFIC, posted on her blog Box of Stolen Socks. It’s a good one; her Saffron & Cardamom Ice Cream has a delicate and exotic taste and an added crunch from pistachios. Like the condensed milk challenge in July, this recipe neither requires making a custard, nor churning, so is a great choice for anyone looking for a simple method that delivers great flavours. She sneaked in just before the deadline again! Having won a Zoku machine in August’s BSFIC, Jennie from All The Things I Eat must have had lollies on the brain. She made not one but two “spicecreams” including Saffron Yoghurt Lollies and Strawberry & Black Pepper Lollies. 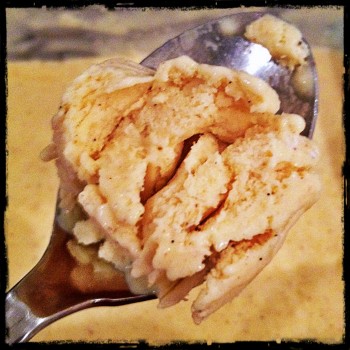 And lastly, here’s Donna’s Apple Pie Ice Cream. She missed the deadline, but it’s another great post so I want you to see it.

Please leave a comment - I love hearing from you!14 Comments to "Recipe Roundup | Spices in Ice Cream"