I’m a natural born collector. As a child I collected stamps, coins, mugs, rubbers and key rings, to name just a few. Our family holidays took us around the world, which allowed me to find great variety, both at home and abroad and I took my collections seriously, taking time and care to choose new additions.

Today, the stamp and coin collections have long since been passed on through the family. The rubbers were discarded. Only a few of the key rings were kept, though I still regret the loss of the rest.

A lot of the mugs are still in the kitchen cupboard. I can’t bear to get rid of the “I’m A Mug From Luton”, though the text is faded almost to nothing, after 25+ years through the dishwasher. Perhaps it’s because the slogan describes me as well as it does the mug?

As I left childhood behind, I stopped collecting. But I missed it. Sometimes, I indulged in retail therapy trips where the urge to buy would result in spending £40 or more on clothes and books and magazines I didn’t really want or need. An article eulogising egg cups caught my attention. The author found such joy in the immense variety of design and shape of objects made for a single, simple task and I was immediately nodding in agreement. There and then I decided to start a new collection, part of me consciously thinking that I could satisfy those occasional urges to buy something new by spending just a few pounds at most. In those early days, prices were often in pence, as initial egg cups were found in charity shops and car boot sales. 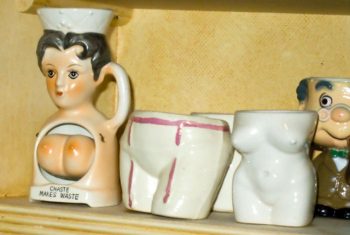 Today, I own far too many egg cups and have over 100 sitting in a box to sell on Ebay (when I get a round tuit).

But the ones I display (on a chaotic and far-too-full living room shelving unit) give me great pleasure. The kind of pleasure only another collector can really understand.

So when I read Allegra McEvedy’s book, Bought, Borrowed & Stolen: Recipes & Knives From A Travelling Chef, I immediately felt a kinship – a warmth that comes from the shared personality disorder of the collecting mindset!

In her introduction, Allegra describes her knife buying as gathering, explaining that she hesitates to use the word ‘collect’ as that implies that her knives are not for use and she certainly uses hers! Don’t worry Allegra, I use my egg cups too, though given that I don’t eat boiled eggs and soldiers that often, it’s a slow cycle. And I confess, some just aren’t as practical at holding eggs as others… 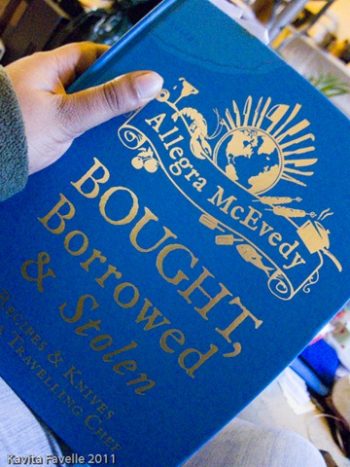 The magpie in me appreciates the rather striking turquoise cloth binding with shiny gold foil print. It’s an unusual design and I like it.

Inside, the book is divided into 19 chapters by country (though the USA is represented by two cities, New York and San Francisco). Each is introduced by a country fact file sharing basics such as geography, population, religion plus a short sharp summary of the cuisine, top five favourite ingredients and most famous dish. Next comes the travel memoir page, where Allegra talks about her experiences visiting the country. I enjoyed these personal memories, though a single page for each means they’re little more than a snapshot. 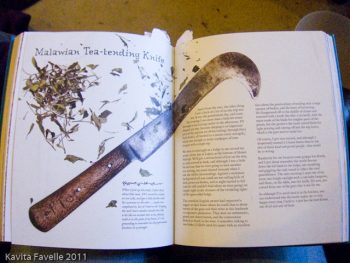 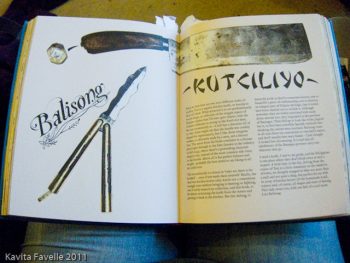 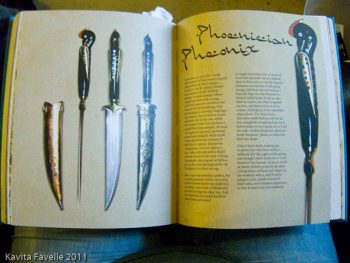 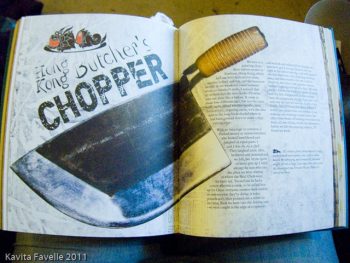 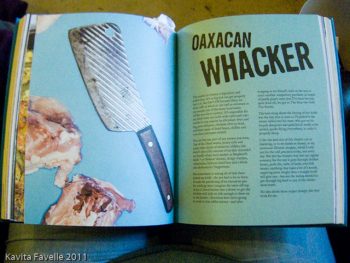 Next, my favourite part of the book, the introduction to the knife that Allegra bought back from that country. Reading about how she found and came to own each knife, what memories it holds, how she uses it now… I can really feel her affection for each item in her collection.

I find the collection fascinating!

The collection of recipes is equally diverse, and I find some more appealing than others. There are many I find interesting to read about but which don’t tempt me at all to make them.

Also, I think it would be accurate to describe most of these recipes as influenced by her travels rather than authentic, something that’s been confirmed by friends from a couple of the countries represented.

Probably the biggest let down for me is the food photography. Whilst I appreciate the idea of simply presenting the food, rather than filling half the shot with styling props and unused ingredients, I find the photographs in this book lifeless and sometimes actually off-putting. Certainly, they don’t do the job of making me salivate and feel an urge to make the recipe.

That said, what I do like is the sheer spread of cuisines, ingredients and types of dishes covered. It’s a fun book for someone who wants to dip their toes into the pool of international cooking and wants a wide spread of recipes to choose from.

The recipe I chose to try is from Malawi, a simple ginger and garlic fried dish. 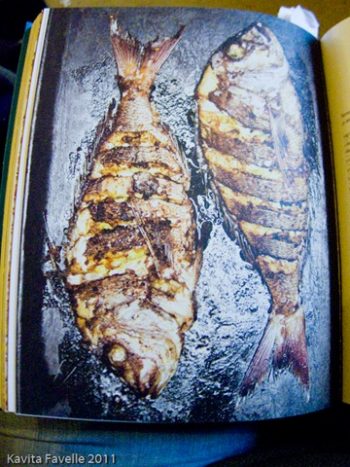 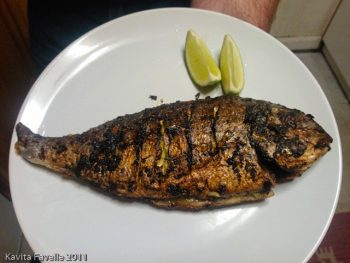 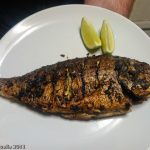 I bought Corsican bream, which were expensive, about £13.50 for two.
I omitted the chilles, for personal taste.
I substituted cider vinegar for white wine vinegar, as that’s what I had in stock.
I used considerably less oil for shallow frying.

We really enjoyed this simple dish, the flavours of the paste were balanced and full on yet didn’t overwhelm the beautiful fish. It was also very quick and simple to make.

With thanks to Octopus for the review copy.