A few months back, while chatting with friends, I bemoaned my lack of adventurousness, inventiveness and originality when it comes to cooking vegetables at home. One of my friends disappeared momentarily, and returned with a copy of The Farm Shop Cookbook by Christine McFadden, which she kindly gifted me.

A few weeks later, I got my hands on a beautiful Romanesco cauliflower (also known as Romanesco broccoli) with it’s vivid lime green hue and compelling naturally fractal spiral heads.

What to do with it? 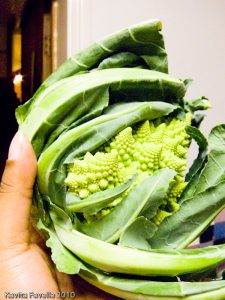 The Farm Shop Cookbook revealed a recipe for Green Cauliflower Cheese with Blue Vinny and Tomatoes. We decided to subsitute Stilton for the Blue Vinny and omitted the tomatoes and breadcrumbs for a pared down version. 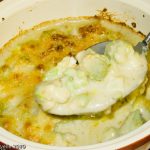 We had this with a lovely roast rib of beef and some roast potatoes (also from the box).

Please leave a comment - I love hearing from you!17 Comments to "Green Romanesco Cauliflower Cheese"