So! Eggs then. One of the most versatile ingredients available to us and one of my personal favourites and yet, I’ve shown such a lack of imagination in using them.

Yes, I enjoy them boiled, fried, scrambled and as omelettes. Yes, I have made eggy quiches and flans. And yes, I use them plentifully in baking.

But I’ve really not shown much initiative in making them the star of the meal in more varied ways and that is something I’m putting right with the help of Michel Roux’s book on Eggs, which I posted about recently. 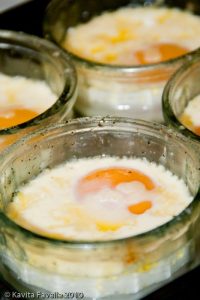 The second recipe Pete and I made from the book was baked eggs at it’s simplest – just eggs and cream, really. 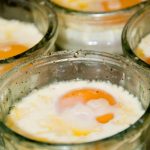 Two each served with buttered toast made a simple but very satisfying weekday supper.

More elaborate versions in the book include baked eggs with chicken livers and shallots in wine, baked eggs with smoked haddock and grain mustard and eggs en cocotte with girolles! Mmm!

Please leave a comment - I love hearing from you!10 Comments to "Comté Baked Eggs"