This guest post is by Delilah Hart. Delilah is travelling the world as she writes for her travel blog, Our Travel Mix. She is currently based in Hoi An, Vietnam, her favourite place in Southeast Asia.

Food is a huge part of travel, whether you’re an avid foodie or not. Malaysian food is a game-changer and definitely one of my favourite cuisines in the world. The combination of Malay and Indochinese cuisine, as well as the passion Malaysians have for cooking, results in the creation of most delectable dishes.

When travelling to Malaysia, one way to make the most of your trip is to prioritise food. Dishes are fragrant, flavourful, and affordable. The following 10 dishes are those you must try on your next trip to Malaysia. Amongst these delicious creations includes the creamy laksa, the fragrant rendang, and the traditional nasi lemak. 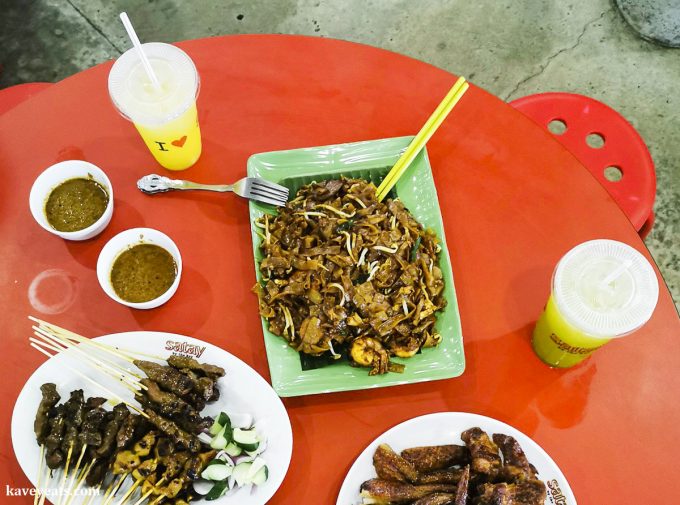 This iconic Malaysian dish literally translates to “stir-fried rice cake strips”. Flat rice noodles are fried in one pan with an assortment of ingredients – mainly cockles, Chinese sausage, bean sprouts, chives, fishcake, shrimp, and lightly-beaten egg. De-shelled cockles are often added to give a little burst of seafood with every bite.

The dish is popular within the whole of Malaysia and Singapore, but the best char kuay teow is said to be in Penang, where it is served on a banana leaf. Chefs in Ipoh have created a gourmet variation of char kuay teow, made with plentiful seafood such as crab meat and duck eggs. In Singapore, orr kway teow, a dark fried noodle variant is extremely popular and can be found at the hawker centres.

Traditionally, char kuay teow is fried using pork fat, making it one of the less healthy (but definitely not less tasty) dishes of Malaysian cuisine. 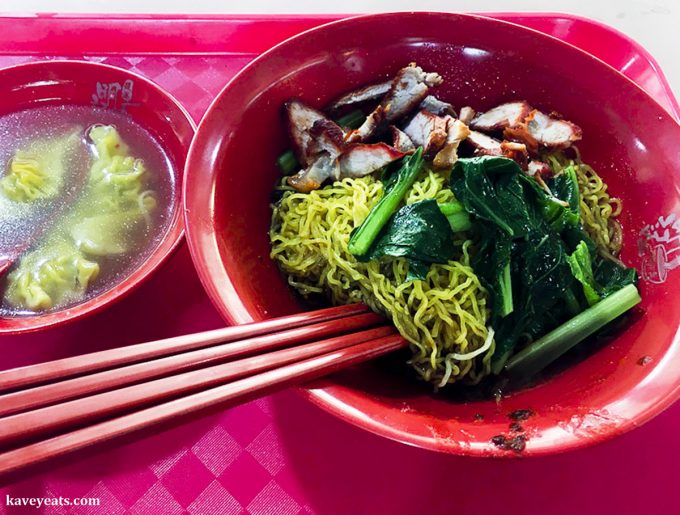 Wantan mee, more commonly known as wonton noodles, is a Cantonese-style dish. As well as gaining popularity in Southern China and Hong Kong, wantan mee is also a staple dish in Malaysia, Singapore, Thailand and Indonesia.

The thin egg noodle dish is typically served with Chinese barbeque pork (char siu), baby bok choy, a side of pickled green chillies, and a bowl of soup with dumplings. Wantan mee will vary from place to place, but one to try is the black sauce variant.

Made famous by the late Anthony Bordain, Chulia Street Wan Tan Mee is the best place to get wantan mee in Penang, the unofficial food capital of Malaysia. Find this stall in the heart of Georgetown. 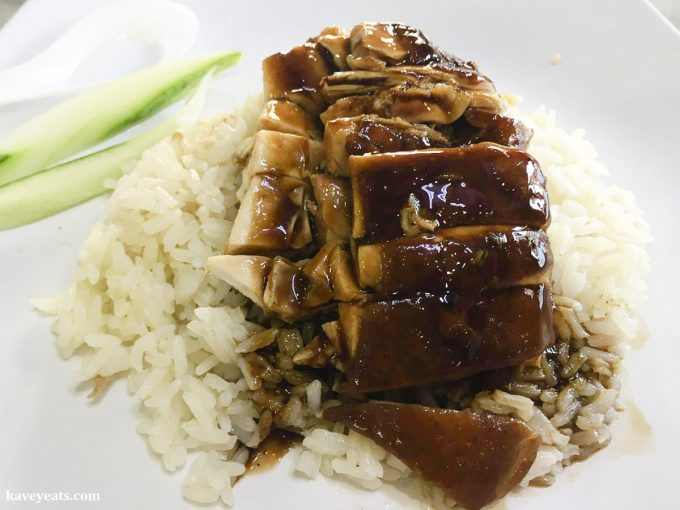 Chicken and rice doesn’t have to be a boring dish. Juicy, poached chicken is teamed with seasoned rice. Cooking the rice in chicken broth, as opposed to water, completely transforms the plain, white rice. The dish is typically garnished with cucumber, chilli, garlic, and sweet black sauce.

Originating in Hainan, chicken rice is a classic dish in Malaysia and Singapore. You don’t have to go far to find a hawker centre or street-side stall with chicken rice.

Hainanese rice is the perfect dish for a picky eater. As a child, I was an incredibly fussy eater. During our family trips to Singapore and Malaysia (I’m half Singaporean), I used to eat chicken rice daily, as well as roti canai, mentioned below.

Another popular relative to Hainanese chicken rice is soya sauce chicken, which is of Hong Kong influence. The dish has been made famous by Malaysian-born chef, Chan Hong Meng, who was awarded a Michelin Star in 2016. You can find his restaurant, Liao Fan Hawker Chan at the Chinatown Complex Food Centre in Singapore. 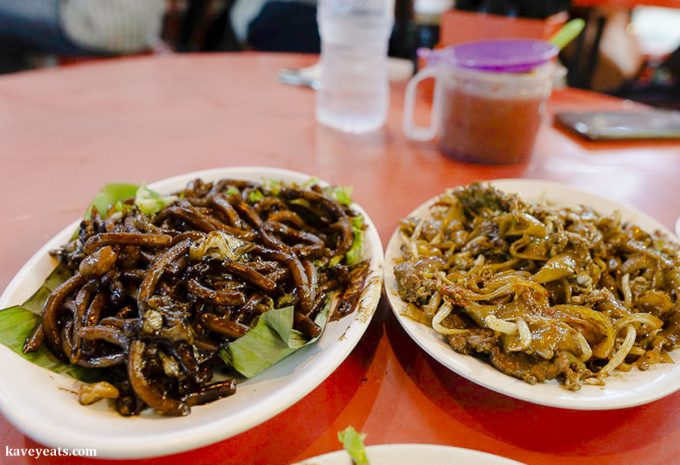 Hokkien mee is a yellow fried noodle dish braised in a dark soy sauce concoction. The dish is found in Malaysia and Singapore, but also in parts of Indonesia and Southern Thailand.

Hokkien is a dialect of Chinese, originating from Southeastern China.

The best place to get Hokkien mee is in Chinatown, one of the most popular places in Kuala Lumpur. We visited Kim Lian Kee Restaurant multiple times and were not disappointed! Their Hokkien mee is 18.5 RM (only $4.40 USD) for a medium-sized plate, large enough to fill up a hungry person. Our tip is to get a few small or medium-sized dishes to share, so you can try a few different things. 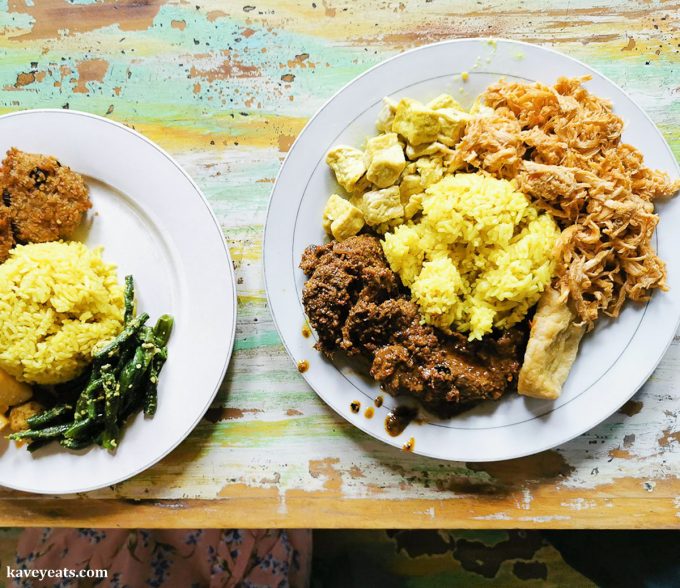 Beef Rendang is one of my favourite Malaysian dishes. The dry curry dish originates from Minangkabau, located in West Sumatra in Indonesia.

Tender chunks of beef are cooked in a coconut milk and spice-based broth. The slow-cooked meal ensures the beef is tender, almost melting in your mouth.

Pair the rendang with rice for a hearty meal. 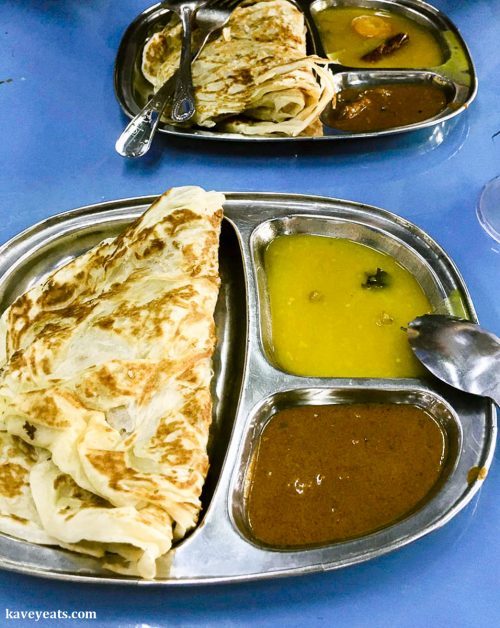 There is a strong Indian influence in Malaysian cuisine. Roti canai, also known as roti prata or roti paratha, is a flatbread dish dipped in curry. The roti is buttery, flaky, and crispy, all at the same time.

The secret to making Malaysian roti is the ingredient ghee, a form of clarified butter. Ghee may be used in Asian cooking as a substitute for butter and oil.

Combine ghee with flour, water, salt, sugar to make the dough. Then, the dough is craftily stretched out to create paper-thin layers, similar to flaky puff pastry. The process of stretching out and flipping the roti is mesmerising. Many stalls and restaurants will be open-air, so you can watch the masters at work.

As well as the classic plain roti, you can also add different ingredients. Popular variations include egg prata, and murtabak, which is a meat-filled roti.

Throughout the years, innovative ideas have made sweet rotis a popular alternative to the savoury dish. Many roti restaurants now serve their own sweet take on the dish. There are rotis available with condensed milk, bananas, strawberry sauce, Nutella, and more! 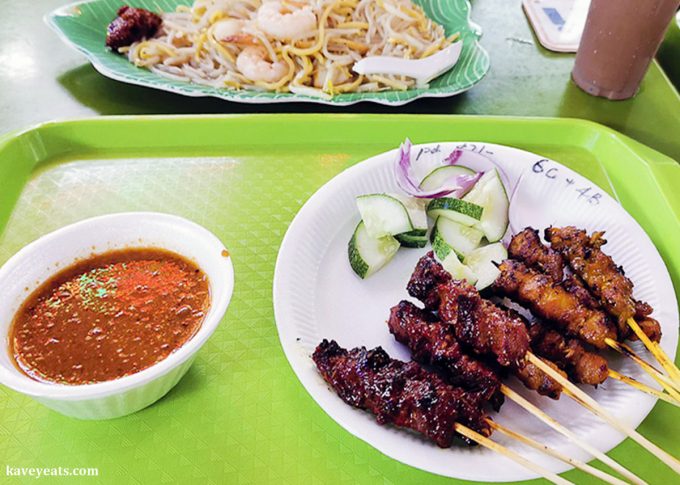 Who would’ve thought meat on a stick would make for such a tasty dish?

Malaysia and many Southeast Asian countries have an overlap when it comes to their tasty cuisine. Satay is one of them. It is originally a Javanese dish, but you’ll find no shortage of satay in street-side stalls and restaurants.

One of the main reasons satay tastes so good is the way in which it is cooked. Instead of frying on the stove, satay is chargrilled, giving the dish a smoky flavour. Watching the cooking process is incredibly interesting, and makes you realise how much pride Malaysians take in their cooking. You know you’re going to get a great tasting meal when ordering Malaysian street food.

The charcoal is lovingly fanned to foster the perfect temperature for grilling the marinated skewers, and the meat is meticulously watched by the street vendors.

Just as you thought things couldn’t get any better, the accompanying sauce compliments satay perfectly. Satay comes with a delicious peanut sauce – the best peanut sauces come with small pieces of peanuts mixed in.

As well as peanuts which are the main ingredient of the sauce, herbs and spices are added to flavour the mix, including garlic, soy sauce, tamarind juice, sesame oil, and palm sugar to sweeten. 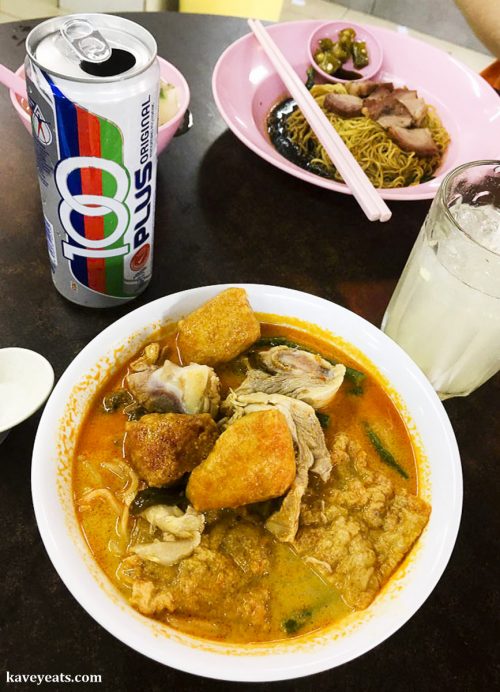 Laksa is one of Malaysia’s most iconic dishes. The famous coconut noodle soup can be made with chicken, shrimp, tofu, fish balls, or a combination of the four, making it a meal suitable for all tastes.

Rice noodles soak in the aromatic, flavourful broth. The finishing touch is a boiled egg, cut perfectly in half. 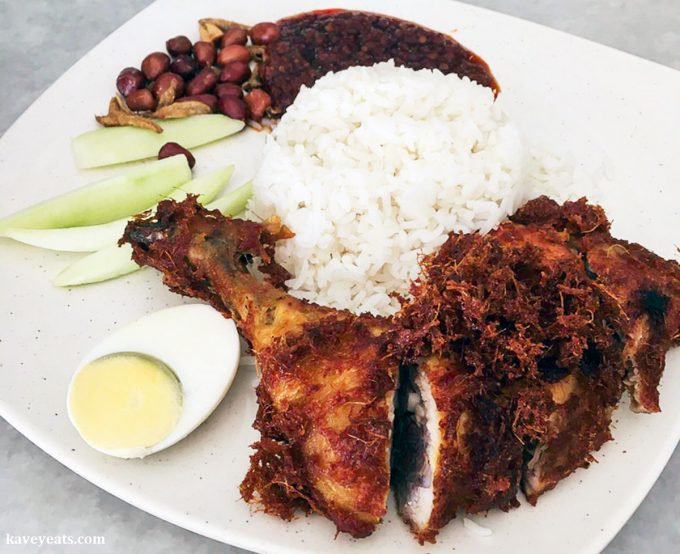 Nasi Lemak is another famous Malay dish that overlaps with other populations, such as Singapore, Brunei, and Malaysia. This is the national dish of Malaysia, so it’s a must-try when visiting Malaysia.

Nasi Lemak is based around rice cooked in coconut milk and pandan leaf. The dish is accompanied by a variety of other foods, including peanuts, fried anchovies, cucumber, prawn sambal, a fried or hard-boiled egg, fried chicken, fish, and rendang. 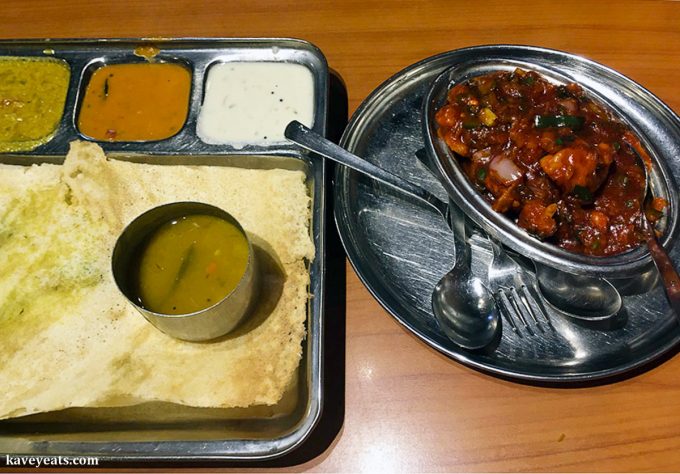 North Indian curries are not for the faint-hearted. They’ve definitely got a kick to them, and if you’re able to deal with the spice, you’ll be enchanted with the flavours.

Northern Indian curries typically use an assortment of dairy products, including ghee and paneer, a soft cheese. The main difference between the curries in Northern India and Southern India, is that meat and dairy are heavily-used in the north, whereas the south tends to focus on seafood.

Bakti Woodlands Vegetarian Food Cafe in KL serves amazing curries. Its convenient location is also a plus – it’s only a five-minute walk from Dataran Merdeka and less than 10 minutes from KL Forest Eco Park. As well as the curries, we also loved the dosa, a thin, crispy pancake with a spicy potato filling. This dish originates from Southern India.

Please leave a comment - I love hearing from you!10 Comments to "10 Dishes you Must Try in Malaysia"